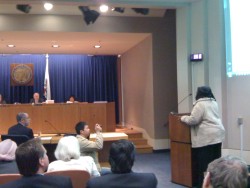 If you’re not paying attention, the California Public Utilities Commission might approve a plan to deregulate the Universal Lifeline telephone service – which could devastate thousands of low-income people who rely on it. Affordable phone access is crucial for residential hotel tenants who live in isolation; and in some cases, it can literally involve a matter of life and death. Yesterday, a group of tenants from the Central City SRO Collaborative – along with their allies at TURN – spoke out against the proposal to replace a $5.47 flat rate with an option that would give phone companies the flexibility to jack up rates. They may have won a possible reprieve against this measure. Advocates will have to come back another day for future hearings, but were upbeat as the Commissioners – who rarely see this population come to address them – postponed the proposal for further study.

For thousands of low-income people on a fixed income, Universal Lifeline plays a critical role in providing basic telephone service. For only $5.47 a month, residents can qualify to get a no-frills telephone land line – helping them make crucial doctors’ appointments, apply for a job or communicate with loved ones.

“I have signed up many residential hotel tenants,” said Lyra Harris. “It’s literally a life safety line. It’s a safety concern for tenants if they fall in their room.” Elaine Jones, a tenant rep at the Raman Hotel, added that one tenant in her building died after suffering a stroke. Because he had no phone, nobody knew for days. “If you don’t have a phone, you’re stuck,” said Jones – who got her first telephone in 30 years through the program.

The proposal would replace Lifeline’s flat rate of $5.47 a month with 55% of the highest rate for basic telephone service. How much that would mean depends upon how much phone companies would raise rates for everyone else. In the past year alone, AT&T upped their rates for regular customers by 26%. The proposal also creates a “voucher” system that Lifeline customers could use for cell phones, which is likewise deregulated.

“The good news,” said Jeff Buckley of the Central City SRO Collaborative, “is that before the hearing the Commissioners decided to pull the proposal off their agenda. Though they didn’t say as much, I believe the Commissioners realized the proposal is a mess. They haven’t really studied the impact of the changes on low-income residents or solicited enough public comment on the issue to render an informed decision.”

Advocates from TURN – who has worked closely with the Collaborative on this issue, providing crucial policy guidance – believe the issue will come up on an agenda item next month. “We hope to see you and your tenants there,” said Buckley. “Thanks again for all who showed up on such short notice. You all did an amazing job.”