Tenant Legislation to Watch in 2015 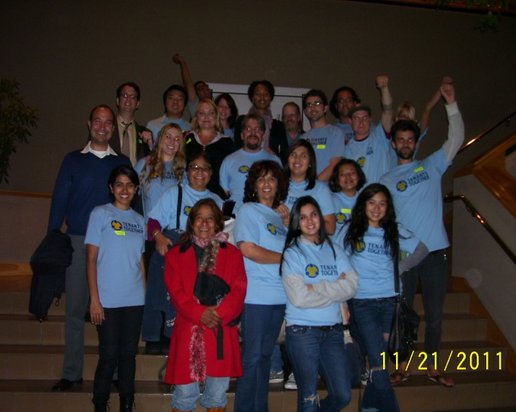 Tenants Together members rallying in Merced

Landlords and tenants in Sacramento are in a bit of a standoff these days, with each side having far more success killing the other’s bills than advancing their own agenda. This means that most logical solutions to today’s problems for tenants will not be introduced or adopted in Sacramento this year. Don’t hold your breath waiting to see a bill introducing statewide rent control this session. That said, there will be important bills tackling major tenant issues in 2015. Potential state bills include legislation to fund the renters’ rebate, ban Section 8 discrimination, reform the Ellis Act, and extend protections for tenants who are victims of domestic violence.

Democrats lost their legislative supermajority this session, but that fact is largely irrelevant to the advancement of tenant rights in California. Tenants gained virtually nothing from the two-year Democratic supermajority. Even modest security deposit and Ellis Act reform bills were killed by Democrats. Real estate interests have spent millions funding and lobbying legislators of both parties and their investment has paid off in recent years.

The good news is that legislators will be under less pressure to serve real estate interests because this year is not an election year for the state assembly or senate. In addition, key anti-tenant Democrats lost re-election bids and will not be in Sacramento to poison the debate. While the climate remains difficult for tenants in Sacramento, tenants will push for important legislative changes this session.

Here are some of the major issues on the horizon this year:

2015 marks the launch of Tenants Together Action Fund. TT Action Fund will work to hold legislators accountable, promote tenant-friendly candidates, and pass legislation. Without a mechanism to hold candidates accountable, we have seen again and again that politics regularly trumps policy in Sacramento.

TT Action Fund is the first group of its kind for tenants at the state level in California. The SF Tenants Union, Santa Monicans for Renters’ Rights, the Coalition for Economic Survival, and others have long endorsed candidates as part of their tenant organizing work. Those groups have changed the political dynamics at the local level in some California cities. Now similar efforts will be made at the state level where it is sorely needed.

Eddie Kurtz of Courage Campaign insightfully wrote in a Sacramento Bee editorial this weekend, “The central political struggle of our time is not left vs. right or Democrat vs. Republican, it is corporate interests vs. human interests.” The statewide tenant movement must invest in candidates who serve human interests over corporate real estate interests and hold accountable those who do not. The launch of the Tenants Together Action Fund is a major step in this direction.

California’s budget revenues are billions higher than projected. A broad coalition is demanding that the Governor restore funds to the recession era cuts to programs that help the poor. Renters are a key part of this coalition. A key demand for renters is restoration of the Renters’ Rebate.

In 2008, then-Governor Schwarzenegger used his line-item veto power to eliminate the rebate of up to $347.50 for senior and disabled tenants making less than $44,096. Nearly half a million Californians relied on that annual check to pay for necessities like groceries and medications. Schwarzenegger’s cut, ostensibly to address budget deficits, was devastating for those most in need.

Governor Brown released his budget on Friday. Despite the budget surplus, he has again defunded the Renters’ Rebate. The legislature can restore the funds through the budget process. Last year, Assemblymember Phil Ting’s effort to fund an expanded renters’ rebate program was held up in the appropriations committee. With the budget surplus, this issue will have new momentum in 2015.

Amazingly, California law does not expressly ban section 8 discrimination, emboldening landlords to refuse to rent to prospective tenants or evict current tenants for no reason other than the fact that these low-income tenants rely on the government to subsidize the rent. California courts put their stamp of approval on Section 8 discrimination in the Sabi v. Sterling court decision.

The Ellis Act is most used in San Francisco, Los Angeles and Santa Monica, but other rent contol cities are at high risk as well. The Act allows a landlord to evict all tenants of a building to go out of the rental business. As demonstrated in detail in a 2014 report by Tenants Together and the Anti-Eviction Mapping Project, the Act is primarily used by real estate speculators seeking to profit through the eviction of tenants. SB 1439 (Leno) would have authorized San Francisco to stop most speculator abuses of the Ellis Act locally. The bill narrowly passed the state Senate last year, but was stopped in an Assembly committee by Assemblymember Sharon Quirk-Silva who has since lost her reelection bid.

Interestingly, Ellis eviction rates in San Francisco dropped sharply over the last year, with the downward trend starting right after Senator Leno introduced SB 1439. This session, the fate of Ellis Act reform may well depend on how frequently the Ellis Act is being misused by speculators to displace tenants. It is not yet clear if prospects for Ellis reform are better this year than last, and proponents are still evaluating how best to proceed.

In 2013, Senator Mark Leno, tenant advocates, and anti-domestic violence activists, passed important protections for victims of domestic violence and human trafficking. SB 612 (Leno) provided relief so such tenants would not be trapped in unsafe living conditions and could escape their leases without suffering financial penalties. Key provisions of SB 612 are scheduled to sunset in January 2016. Expect to see a bill to extend these protections in this legislative session with the National Housing Law Project, the Western Center on Law & Poverty, and the California Partnership to End Domestic Violence continuing their excellent work on this issue.

A rational state experiencing huge rent increases and the second highest rents in the nation would adopt statewide rent control, but there will be no bill calling for that in Sacramento this year. In contrast, campaigns for rent control at the local level will gain momentum in 2015. In the Bay Area, for example, grassroots campaigns for rent control have already begun in cities within Alameda, San Mateo, Santa Clara, and Marin counties.

Landlord and realtor associations will continue to fight local tenant protections with misinformation and scare tactics, but astronomical rents and strong public support will push local rent control onto the agenda of an increasing number of city councils. As former NY mayoral candidate Jimmy McMillan famously announced, “the rent is too damn high.” Plus, with the increasing consolidation of rental property in the hands of wall street landlords, the need for local tenant protections has never been greater.