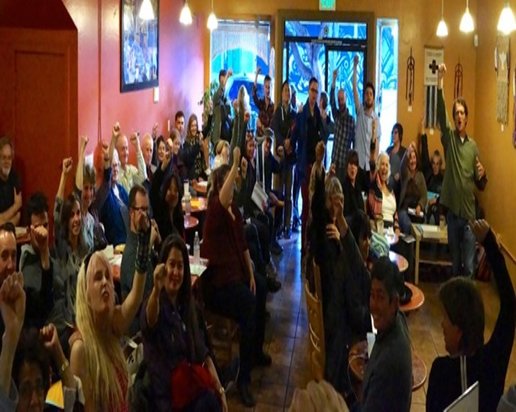 It all started one day at my daughter’s pre-school, when a teacher mentioned he was having issues with his landlord. I soon learned from another parent that many other staff members were facing similar problems. Teachers were being driven out of their homes in many cases because they didn’t know their rights. Having led tenant trainings statewide for years as executive director of Tenants Together, I offered to do a tenant rights workshop for the teachers who needed some advice.

The success of that training—several of the teachers told me later that the information they learned helped them stay in their homes—sparked an idea: Let’s take the tenant empowerment movement to the hyper-local level.

Rather than just asking tenants to come to large, centralized events or offices, we could take know-your-rights training and counseling services to where they lived at the neighborhood level—at cafes, libraries, and community centers. And we could do it throughout the City.

At our first two bootcamps, something strange happened: More than double the number of RSVPs showed up. We found that the appetite among tenants to learn their rights or get referral information from a counselor is, by all measures, off the charts.

So we decided to double down. Rather than holding one event per week in each neighborhood, we expanded to two. So far, we’ve found that with multiple events, we end up with more manageable crowds, allowing us to better meet our goal of helping as many renters as we can to learn their rights and stand up against displacement.

One explanation for the unexpectedly big response is found in a recent report on eviction trends, published by the San Francisco Anti-Displacement Coalition. Based on data from the San Francisco Rent Board, the report shows that over the past five years, two leading causes of evictions are alleged lease violations and so-called “nuisance” allegations. We came up with a term: “Gotcha evictions.”

As shown in a graph from the report, the past few years have shown a sharp increase in the two categories that can be characterized as “gotcha evictions.” Are San Francisco tenants suddenly breaking their leases at breakneck pace? Or creating nuisances like never before?

Of course not. With soaring property values, landlords are looking for any excuse to kick tenants out of their homes, honing in on innocent activity like carrying a bicycle through a common hallway or hanging laundry on a porch (actual examples cited in the ADC report) as a pretext for eviction. Too often, tenants are harassed out of their homes through these tactics.

The good news is that tenants can fight against these evictions and win. Of course, it starts with knowing your rights, and that’s where the bootcamps come in. If you are interested in joining, the next bootcamp will be at Bean There Cafe, 201 Steiner Street, on Wednesday, June 10, 7pm. For the full bootcamp schedule, visit www.tenantbootcamp.org.

Dean Preston is Executive Director of Tenants Together, California’s statewide organization for renters’ rights. Working with the San Francisco Tenants Union, he launched Tenant Rights Bootcamps in May 2015.