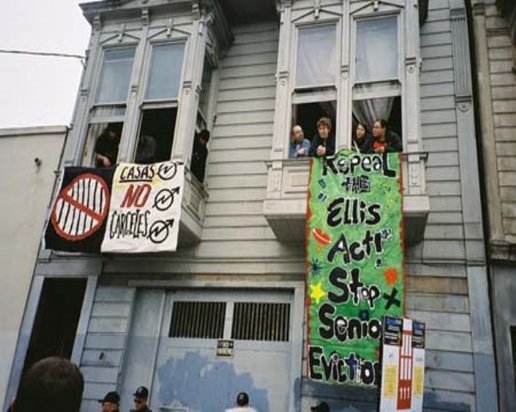 My October 15 tribute to the late Ted Gullicken focused on his extraordinary contributions to San Francisco tenants. But his impact was even broader.

As Sam Dodge pointed out at the Tenants Union gathering Tuesday night, Ted brought activists from anarchist and other non-election oriented backgrounds into the world of grassroots politics. He achieved this because he was that rare activist who had one foot in both worlds. Ted could spend one day lobbying supervisors over legislation, and the next occupying a vacant building as part of his Homes Not Jails campaign.

Gullicksen launched Homes not Jails in 1992, the same year he got the Tenants Union actively involved in the tenant movement’s drive to cut annual rent increases by more than half (Prop H). So while Ted was working with us on the nuts and bolts of precinct walking, literature distribution, and campaign literature production, he was simultaneously working with others to plan the takeover of a vacant building at 90 Golden Gate Avenue in the Tenderloin.

Ted was already media savvy enough to know that Thanksgiving is an ideal day to get coverage of a homeless-related issue. That’s the day when people are supposed to be thinking of the less fortunate, and it begins the “Season of Sharing” that encourages people to be supportive of the poor and unhoused.

Ted’s initial building occupations, done in conjunction with Food Not Bombs, combined his tenant activist focus. Homes Not Jails occupied 250 Taylor Street, a long vacant apartment building that was supposed to have been renovated and reoccupied years earlier. The group squatted in buildings that were to be demolished (despite having the ability to house people) or kept vacant by owner choice.

Among those who joined these occupations was Sister Bernie Galvin of Religious Witness With Homeless People. Now living in St. Charles, Missouri, Sister Bernie recalled yesterday how Ted emailed her “during the week before Easter Sunday saying that this Saturday he and several SFTU members were going to illegally occupy a small apartment building in the Mission from which several very poor, elderly people had recently been evicted. He asked if I would join them in this act of civil disobedience.  I replied, Yes! Ted, I cannot think of a holy-er way to observe this most sacred time of the year than to join you in this struggle for justice.”

Sister Bernie felt that “This man, Ted Guillicksen, with such a generous and justice-seeking heart and brilliant mind, can teach us ‘religious’ a thing or two about an essential element of what it means to be holy, about truly living our faith.”

Ted was at much at home in the world of bolt cutters and illegal squats as he was at City Hall. And he showed others that these two worlds were not exclusive. Squats and grassroots election campaigns were both tools in the activist’s handbook designed to further economic and social fairness.

Ted’s broader impact was also seen in his uniting what I describe as “cultural” vs. “institutional”  progressives in the city’s tenants’ movement.

When I moved to San Francisco in 1979, I was struck by how much more conservative the city’s tenant activists looked compared to my prior experience in Berkeley. That was likely because San Francisco tenants movement grew in strength through Catholic parishes, whose members  often did not share the lifestyles or values of  the New Left activists of the 1960’s and 70’s.

As the city’s tenants’ movement through the 1980’s became centered in tenant counseling organizations, it became more culturally and institutionally mainstream. I felt by the start of the 1990’s that campaigns for an entity known as “tenants” had become divorced from larger economic justice struggles. “Rent control” had become a technocratic concept drained of the passion that led to its enactment.

Ted always framed rent and eviction protections as core social justice issues. He got the cultural and non-mainstream progressive community on board, expanding the tenants’ movement.

The tenants’ movement today, and the tenant activists I saw at the gathering for Ted Tuesday night, was much more culturally and demographically diverse than the movement pre-Gullicksen. And that will not change by his untimely death.

Ted Gullicksen also built the most powerful tenant political movement in San Francisco history. He institutionalized the winning strategies from tenants Prop H campaign in 1992, and then took the Tenants Union slate card to a whole other level.

Under Ted’s leadership, for over two decades the Tenant Union candidate endorsements have been the gold seal of approval for the most pro-tenant candidates. A counter-cultural, left wing Ted Gullicksen had no problem making deals with political insiders with whom the politically correct set would keep their distance.

Ted understood that the broader the reach of the TU slate card, the better for tenants. He would deal with nearly anyone if it advanced the tenant cause.

Ted may have devoted too much time to election and legislative campaigns at the expense of organizing a broader movement. But amidst an ongoing housing crisis Ted understandably wanted to pass every conceivable law to reduce displacement. His loss could mean fewer tenant electoral campaigns simply because he is not around to organize them.

Ted Gullicksen’s broader impact on San Francisco politics and hundreds of thousands of tenants will not be affected by the result of Prop G. But it sure would be a sweet sendoff for Ted if a campaign that meant so much to him prevailed on November 4.

Since 1992, tenants have had an extraordinary record of success in ballot measures. But the Prop G ballot question does not refer to “evictions” or “speculators.” Some voters whose knowledge of the initiative only comes from the ballot question could be confused, and vote no.

I speak from experience. In November 1994, our Prop G had the broadest backing of any measure on the ballot. But its goal of improved housing code enforcement and building permit processing was not mentioned in a ballot question; instead, it only referred to creating a new department and a commission. We won 53-47%, but the ballot question made it closer than we thought.

For us to hand Ted Gullicksen a victory in his last campaign, voters must know that Prop G is the only measure on the ballot that will reduce speculator evictions. That requires getting the word out.

To volunteer for Prop G, go to http://www.speculationfreesf.com/volunteer . Volunteers on Election Day and the preceding three days are particularly needed.

Ted never sought glory or credit. He would likely feel sheepish over the incredible outpouring of support that his loss has triggered. But all of us who worked with him know that Ted’s recognition is richly deserved.