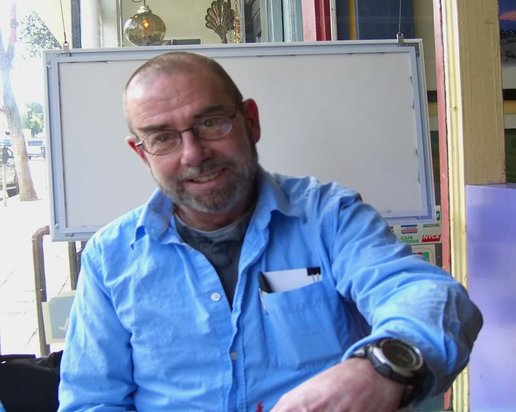 Ted Gullicksen, leader of the San Francisco Tenants Union and a key figure in the city’s tenant movement since 1992, died unexpectedly on October 13. He was 61. Having spoken with Ted last week and exchanged emails only a few days ago, I know I speak for everyone in saying that his death comes as an absolute shock. He died decades before his time.

I began working with Ted in 1992 on the Prop H campaign, which cut annual rent increases by more than half. For the next decade I spoke with Ted virtually every work day, often multiple times. Ted transformed the SF Tenants Union from a group that had never met its potential into San Francisco’s most effective tenant political advocacy group.

Ted worked tirelessly for the tenant cause. He did the work of three people, which is why we all used to say he was irreplaceable.

Ted loved San Francisco. That’s why he fought so hard to keep its economic diversity. Ted’s fondness for his adopted hometown (he grew up in Massachusetts) was evident when he went from being a Red Sox fanatic to rooting for the Giants.  But his thick Boston accent never disappeared.

Ted Gullicksen never sacrificed principle for money. This was the true source of his special power. Since he could not be persuaded to act against tenants’ interests for money, power, access or other offerings, he had an independence that increased his clout.

Ted was also a very highly skilled designer of campaign literature. I highlight this among his many skills because few realize the significance of his talent. No other tenant group leader over the past two decades has had anywhere near Ted’s level of skill in designing the literature that told the tenant story to voters.

And realize: Ted never got paid a dime for designing campaign literature, even though consultants routinely get paid tens of thousands of dollars for doing so. And Ted never asked for a dime, either for himself or the Tenants Union.

Ted saved the tenant movement tens of thousands of dollars in campaign fees each election, boosting its electoral power. Or, more accurately, he enabled tenants to produce effective mailers and slate cards they otherwise could not afford.

And considering how much Ted Gullicksen loved election campaigns, rare was the even year election cycle when his campaign lit skills were not put to use.

Ted never wanted an election cycle to pass without putting a tenant measure on the ballot. He shared my skepticism of the Board of Supervisors passing strong pro-tenant legislation, and I felt fortunate to be working with someone who recognized the importance of winning tenant gains at the ballot.

After tenant groups won their first San Francisco ballot measure with Prop H in 1992, Ted went after the third rail of rent control in 1994: the exemption of owner-occupied buildings of four units or less.

Recent arrivals to the city may not be aware of this exemption, which removed thousands of longterm tenants from rent control’s protections. In those days, real estate speculators would buy four unit buildings, do an owner move-in eviction of a single unit, and then decontrol the entire building within six months.

Few thought that the owner-occupancy exemption could be removed. The popularity of “Mom and Pop” landlords had created the exemption in 1979, and most assumed that voters would retain it.

I and other tenant activists were focused on improving housing code enforcement in 1993 and 1994, and we had our own November 1994 campaign (Prop G) to deal with. So while tenant groups backed Ted’s effort with what became Prop I, it was primarily Ted and the Tenant Union’s campaign.

Prop I made Ted a lot of enemies. We learned during that campaign that some “progressives” were also small landlords. They didn’t appreciate Ted cutting into the economic value of their properties by bringing them under rent control.

Ted didn’t care. He used to laugh when I told him stories about progressive activists denouncing him. All he cared was ensuring tenants in small buildings got rent and eviction protections.

Ted particularly focused on tenants in small buildings. Whereas the former Old St. Mary’s Housing Committee (now Housing Rights Committee of SF) and my organization, the Tenderloin Housing Clinic had a tenant base in larger buildings, the SFTU and former St. Peter’s Housing Committee (now Causa Justa) primarily worked with tenants in four-six unit buildings or less. So it was understandable that Ted would seek a ballot measure to bring them the same rent control and eviction protections of other tenants.

The 1994 election had the most progressive voter turnout in San Francisco history. It also occurred in the eighth consecutive year of a real estate downturn in the city. As a result, the opposition to Prop I spent barely over $100,000. I know that seems impossible when the current No on G campaign is likely to spend $2 million, but the combination of real estate downturn and landlord overconfidence saw surprisingly little money come in against Prop I.

To the surprise of everyone but Ted, Prop I won. And it represented the largest expansion of rent control since the original ordinance passed in 1979.

I worked on so many campaigns with Ted in the decade after the Prop I victory that I lost count. All of our campaigns for tenants prevailed. A landlord effort to reverse Prop I with their “Take Back Our Homes” initiative was soundly defeated. Tenants also defeated a statewide “eminent domain” measure that would have repealed rent control.

Ted and I also worked to defeat a de Young Museum bond because Mayor Brown allowed the full cost of the increased taxes to be passed through to tenants. I believe bond proponents spent $1 million to our $10,000, and we did not mount our campaign until after the ballot handbooks were printed.

During Willie Brown’s first term, Ted and I led efforts to win sweeping legislation for tenants. We got legislation enacted that would have stopped Ellis Act evictions, only to have the courts wrongly throw it out.

The new Board created opportunities for strengthening rent control, which Ted pursued. He helped us in our campaign to save rent controlled housing at Trinity Plaza, and did whatever he could to stop the demolition of sound housing at Parkmerced.

We often hear of people being described as “heroes” after their death. Ted Gullicksen was a true hero and he will be remembered as such.

In my twenty plus years working with Ted, we never had an argument. We never had bad feelings after a conversation. Our policy differences were minor. Ted was always someone who looked to work with people, not alienate them. That’s a side of Ted many people don’t know. Ted was the easiest person in the world to get along with, and one never heard a critical word about him from fellow activists.

Ted was a great person to work with. Let’s not lose this fact amidst his many accomplishments.

Ted and I spent less time working together after 2007 when I shifted my chief focus from citywide tenant election campaigns to the Tenderloin and other issues. But we continued to discuss strategies to combat Ellis evictions and worked closely on the Airbnb legislative campaign. We spoke last week about how to maximize the value of the remaining campaign literature for the November 4 election.

I was at a strategy meeting yesterday morning about November 4 that Ted was unable to attend. We planned to fill him in later, eager for his feedback.

We never got the chance.

Many are asking where the SFTU goes from here. Bobby Coleman of the SFTU Board addressed that issue last night, and expressed confidence that Ted had laid the foundation for the group’s stability and growth.

I can say without hesitation that if Ted could answer how to respond to his death, he would say: work to pass Prop G. Ted was going all out for Prop G, which he saw as critical to stopping the real estate speculation primarily targeting the tenants in smaller buildings for whom he had long fought to protect.

At a gathering at the Tenant Union offices at 558 Capp Street last night, it was suggested that Prop G should stand for Gullicksen. Those present pledged to channel their profound sadness at Ted’s loss into working to pass what will be Ted Gullicksen’s last ballot measure.

Sara Shortt spoke for all of us in expressing her profound shock that someone we all spoke to and met with regularly, who was so central to the movement, could suddenly be taken from us. A full memorial service will be scheduled and publicly announced.

Like Joe Hill, Ted Gullicksen would urge everyone not to mourn, but to organize.

Randy Shaw is Editor of BeyondChron and Director of the Tenderloin Housing Clinic. He will never forget the hours spent reviewing campaign literature with Ted, and the glee we experienced when we felt we hit the messaging exactly right.