Technicality Forces Supervisors To Give Go-Ahead To Condo Conversion 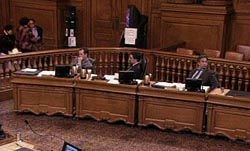 Despite the evictions of the tenants, the Board of Supervisors was forced to ultimately give the go ahead to a condo conversion on Vallejo Street because of the Board’s limited legal ability to reject final subdivision maps. The 6 unit TIC at 400 Vallejo Street was created after the tenants were given Ellis eviction notices in 1999. Under Section 1386 of the city’s Subdivision Code, condo conversions are prohibited when there have been “evictions preparing the building for conversion.” Section 1386 specifies that it is the Planning Commission which has authority to reject condo conversions following evictions.

Earlier this month, the Supervisors unanimously voted to reject the “final map” for the Vallejo Street property based on the fact that the applicants initial application for condo conversion indicated that they had no knowledge of what had happened to the tenants in the building (even though the applicants had signed the eviction notices). While the Supervisors’ motivation was to enforce Section 1386 of the Subdivision Code, the Board’s legal authority was based on the misinformation on the initial application, with the City Attorney noting “had the correct information been presented, the Planning Commission, in accordance of Section 1386, likely would have disapproved a tentative subdivision map and the Board would not have a final map pending before it at this time.”

Subsequently, though, it was discovered that the Planning Commission had, in fact, held a hearing on the property in 2004 and questioned the applicants on their statement that they had no knowledge of what happened to the previous tenants. The applicants characterized the evictions as “negotiated settlements” with the tenants and the Planning Commission subsequently approved the tentative map.

It was unclear from the outset whether the Vallejo conversion could be stopped at the late point it was found, but tenants saw it as an opportunity to raise the issue of enforcement of Section 1386. The strategy for future conversions which were created through evictions will be to appeal the tentative maps issued by the Planning Commission and-on tentative map appeals-the Supervisors’ legal authority will be much broader and these conversions will be stopped.