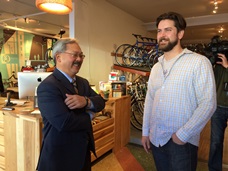 There is a sense of belated justice in Twitter and other tech companies reviving San Francisco’s Mid-Market neighborhood: in the 1950’s, it was a technological innovation that triggered the area’s nearly sixty year decline. That innovation was television. From 1948 to 1952 alone, national revenue from annual film attendance fell from $90 million to $51 million, a 45% decline. Television viewership increased by 76 million from 1946-1961, as televisions spread through the population much faster than had telephones and radios. Instead of attending Market Street movies, people now stayed home and watched television. When you add the lost business due to the 1950’s population shift to suburbia, the Mid-Market theater district could not survive.

Mid-Market had a fundamental problem: it lacked an economic function in the city after its theater business declined. Its office space went wanting despite the city’s 1980’s office boom, and residential developers avoided the area when construction was underway nearly everywhere else during the dot-com boom of the late 1990’s and the subsequent housing boom. The area’s resurgence via the Twitter relocation was as unexpected as its earlier decline, and while progress to date has been extraordinary, further action is still needed for Mid-Market to regain its lost luster.

Twitter’s Thursday stock offering is bringing a lot of attention to its impact on Mid-Market. The New York Times described how Twitter’s relocation spawned the area’s resurgence, (“Twitter helps revive a seedy San Francisco neighborhood,” November 2) and other media will provide their own take on the dramatic influx of new businesses and housing in only the past two years.

As a supporter of the Mid-Market/Tenderloin payroll tax exemption that brought Twitter, I am often struck by those who believe that San Francisco’s boom economy would have revived Mid-Market without tax breaks or new tech companies. Such a belief is pure fantasy. Mid-Market floundered for years while surrounding areas like SOMA, Upper Market, and Hayes Valley prospered; few saw hope for its future prior to Twitter’s announcement.

I am equally surprised by those claiming that the so-called “Twitterization” of Mid-Market has caused the area’s gentrification (as claimed in a flyer for a series of protests set for Thursday at Twitter’s headquarters). If the current business and street activities in the core Mid-Market area of 5th to 8th Streets constitute “gentrification,” the term has lost all meaning.

Walking down Market Street from 9th to 7th Street yesterday with Mayor Lee and accompanying media offered a ground level view of the area as it stands today. Its retail spaces include multiple check cashing outlets (perhaps the street’s most popular business), convenience stores, low-cost restaurants, and the type of owner-run retail businesses that have been in Mid-Market for decades.

Visible evidence of change to this stretch of Mid-Market is primarily in the form of scaffolds on buildings. There is also a vacant lot at 8th and Market where the last vestige of the old Trinity Plaza once stood (construction on the third tower begins soon). The building blocks for revitalization, from ACT’s opening of the Strand Theater to Dolby’s occupation of its building to the renovation of the Renoir Hotel—are still in the future.

Yet business owners are feeling positive about the improvements over the past two years. The Mayor stopped to talk with the proprietor of Sam’s Diner, who praised him for his work to improve the area. He later entered the newly expanded Huckleberry Bicycles at 1073 Market. Co-owner Zack Stender told the assembled media that the store has doubled in size after moving to the site two years ago; he noted that many of the new Mid-Market workers ride bikes and that his store fit their needs.

The media asked the Mayor many questions about 1049 Market Street, where the city has actively worked to prevent the eviction of tenants and the loss of residential housing. The mayor was also asked about those who say he only cares about corporations like Twitter and not about tenants facing eviction.

The Mayor reminded the media about his leadership in winning voter approval of the city’s $1.3 billion Affordable Housing Trust Fund in the November 2012 election. The Housing Trust Fund provides a permanent source of revenue to fund the creation of affordable housing for low and middle income households for the next 30 years.

I got the impression that many in the media had forgotten about this historic victory, which is among many actions refuting the false narrative that the Mayor is “not doing anything” about evictions and rising rents (other actions include his tripling of Ellis Act legal defense funding, steep increase in tenant counseling funds, the long overdue city takeover of the Housing Authority and the ongoing reinvention of its operations, his support for the tenant version of the condo conversion reform law, his support for expanded tenant hardship provisions for capital improvement passthroughs, and his repeated public statements about the need to reform the Ellis Act).

While Mayor Lee repeatedly described Mid-Market’s “renaissance,” he also emphasized that much more needed to be done. And anyone walking between 6th and 8th Streets in Mid-Market recognizes that area still needs help.

While the many projects undergoing renovation or construction will make a major difference, more must be done to return Mid-Market to its historic role as an inviting place for everyone in the city. It should be a place where people come for sidewalk cafés, outdoor bars and restaurants, areas now used as football fields of vacant brick.

This requires changing the streetscape. And a step toward this goal is to use this period of transition to
to encourage more bicycling on Market Street. The city’s protected bike lanes currently end at 8th Street. Now is the time for a pilot project extending the lanes to the end of Market and to banning private cars from Van Ness to Steuart Streets.

Currently, only 14% of Market Street traffic is private cars. Some of these drivers are likely trapped on Market and desperate for a way out; others can find alternative routes.

The upside of a pilot program to ban cars is that it can make Market Street far more desirable while we await the completions of renovations and new construction.

The transformation of Market Street into a grand boulevard for cycling would be unique in the United States. It would show that San Francisco’s urban planning vision for Market Street matches the innovation associated with the tech companies that call the area home.

Once private cars are eliminated, protected bike lanes can cover nearly all of Market Street, creating a bike experience that people from the entire Bay Area will come to enjoy.

A grand bike boulevard could return Mid-Market to its historic role as the place where people from throughout the Bay Area came to have fun. Bicycling would expand the customer base for Market Street restaurants, cafes and retail outlets a dozenfold, and replace the current traffic mess on Market with a vision of people of all ages finally getting to enjoy a leisurely ride down the city’s foremost street.

There is much to be excited about in contemplating Market Street’s future. And that’s not a statement anyone made before Twitter announced its plans.