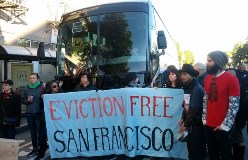 Based on the protests, one would think that tenant displacement in San Francisco is driven by a company providing buses for employees, not Ellis Act evictors terrorizing vulnerable tenants. Speculators like Urban Green and Sergio Ianturno must love that activists are directing media to associate evictions and displacement with Google buses rather than to those like themselves who are actually evicting vulnerable tenants. And while speculators for profits go about their daily lives in peace, it is Google bus passengers—who have evicted nobody—who are protested.

The irony of the current Google protests is that when the 1990’s dot-com boom brought the first wave of Ellis evictions to San Francisco and drove up rents and home prices, there were no Google buses. In those days, many criticized the environmental costs of San Francisco residents driving to tech jobs in Mountain View and nearby areas. Traffic in both directions on Highways 101 and 280 was horrific until the dot com bust took thousands of cars off the roads.

So now that Google and other South Bay tech companies are providing buses so its employees are not driving alone to work, this is said to be a bad thing. Some argue that absent the buses some of these workers would not live in San Francisco, a premise refuted by the late 1990’s experience.

The notion that depriving the city of Google buses would cause enough people to leave the city so as to noticeably reduce housing demand and rental costs is absurd. Rents were skyrocketing before the 2011 tech boom, and the only reason Ellis evictions were lower from 2008-2011 is that speculators could not get financing to acquire properties. .

But their banners notwithstanding, many activists blame Google buses for tenant displacement— rather than speculators doing the evictions—for another reason: Google protests bring media coverage for activists’ broader critique of the tech industry.

As Google bus protest organizer Leslie Dreyer observed in a December 20, 2013 Bay Guardian article, “People say ‘you should protest city hall!” But “we did that every day. No one noticed us until we protested a Google bus. There’s a tension when you take it to the street.”

But where I disagree with Google bus activists is on the practical impact of targeting buses instead of Ellis Act evictors. The former is the wrong target, confusing the public over the true villains.

Instead of targeting buses, activists could slow Ellis evictions by raising the personal stakes for speculators. Protesting Ellis evictors at their homes, places of business, kids soccer games etc will deter evictions and reduce displacement.

Yet despite the vulnerability of these targets, there have been only a handful of direct actions targeted at Ellis evictors. And none that I am aware of have had the crowds of the Google protests, or actually interfered with speculators’ daily lives. These economic terrorists live in splendor and drive expensive cars that are never blockaded by protesters who target Google buses.

Clearly, activists prefer targeting Google because protests generate morel media. But the strategy the media likes best is not necessarily the one that best serves the interests of vulnerable tenants.

It’s a classic example of what I describe in The Activist’s Handbook as confusing winning media coverage with winning the underlying campaign. The Google bus protests have “won” activists media coverage about a “tech backlash”—whatever that is worth— and led to Google paying a $1 bus stop fee.

But Google bus protests have not stopped a single eviction.

Isn’t the eviction of longterm San Francisco tenants driving activist anger? People are not taking to the streets because Noe Valley two bedroom apartments that were not affordable prior to the tech boom are even less so now. Rents on vacant units in most San Francisco neighborhoods where Ellis evictions are occurring were not really “affordable” in the pre-tech boom days; what’s alarming now is the loss of affordable rent-controlled housing—and tenants’ sense of security—due to the Ellis eviction wave.

As for activists who believe the $1 bus stop fee shows the protests achieved results, Kaiser shuttles have long picked up employees in the morning at the MUNI bus stop at 9th and Market and nobody has said a word. This despite Kaiser’s series of attacks on the progressive California Nurses Association and its earning billions in profits. Few can even suggest with a straight face that the attacks on Google were about getting them to pay for the use of MUNI stops.

Imagine if Google bus activists brought their energies into making Ellis evictors daily lives much more difficult. It might not generate national media, but it would do much more for deterring future speculator evictions. .

Randy Shaw is Editor of Beyond Chron and Director of the Tenderloin Housing Clinic, whose attorneys defend Ellis Act evictions.