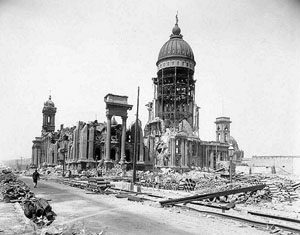 San Franciscans will soon reach the saturation point when it comes to earthquakes, fires and life 100 years ago. Rare is the city based corporation which isn’t bankrolling something, someone or some fabrication for blurring, flawed corporate histories. Expect fireworks, fire trucks, fire escapes fire people and even a few fire sales.

As sure as cable cars climb to stars, official San Francisco will produce With a few twists and turns we shall, one more time, one huge hat, Val Diamond and some trendy ditty from Beach Blanket Babylon. Expect the Cal or Stanford Marching Band and Tony Bennett singing “that” song. If it was good enough for Queen Elizabeth, two Super Bowl teams, Herb Caen, one, possibly two U.S. presidents, somehow it has to be good enough for us.

The second group are called people. Though they always deliver, lowered expectations allow the true San Francisco spirit to rise and sparkle. For this “City That Knows How” spectacle, look to San Franciscans who trace their history back to the “South of Market Boys.” With a membership possibly as large as 2,000, many were survivors or had lost family in the 1906 earthquake. These weren’t the city’s society bunch by a long shot.

On April 18, 1924 they placed a wreath on Lotta’s Fountain at 3rd and Market and a tradition was born. With exception of the creative 1906 Caruso sing-a-long at Yerba Buena Gardens, this is the only event which truly links our 21st century world to the activities of San Francisco 100 years ago.

Each year, there has been a ceremony, a wreath has been placed, and those still alive from that 1906 morning gather at Lotta’s Fountain. Joining them are San Francisco’s firefighters. 5:13 a.m. on April 18th is when true San Franciscans grab a donut, a cup of coffee, possibly something stronger and stand with men and women respected as the best in the world at putting out fires.

If credit goes to the South of Market Boys for kicking off the commemoration, it is Taren Sapienza and Lee Housekeeper who have preserved, guarded and maintained this San Francisco tradition.

No matter how creative or passionate others participate, it is Lee Housekeeper and Taren Sapienza whose year in, year out work has kept this event alive. Unlike many other projects, they face real sadness each year when learning another 1906 survivor is gone.

Housekeeper and Sapienza both deserve credit for decades of perseverance. In fact, for this project they seem the perfect match.

Lee Housekeeper is a true master at the art of publicity. Whether cultivating the image of the Maltese Falcon at John’s Grill or keeping alive the memory of Jerry Garcia, Housekeeper knows San Francisco media and his ability to generate press is something to watch.

Taren Sapienza has taken the anniversary moment of the San Francisco earthquake and carefully molded a memorable and rich reflection of the soul of the city. At about 4:30 am on any April 18 Lotta’s Fountain at 3rd and Market St. is the site for arriving fire trucks, from the most modern to steam driven antiques. Then the survivors, the people who lived through the earthquake arrive. Sapienza treats each survivor as a city treasure. Tradition has it that the current mayor interviews each one.

Following the event a breakfast follows at the St. Francis Hotel. The same breakfast, in fact, which was served on that fateful morning 100 years ago. What cannot be forgotten is how this annual event so authentically allows those who choose to be part of so real a San Francisco experience. I urge every San Francisco, native, newly arrived or “just traveling through” to join the people of this city next Tuesday morning. The place: 3rd and Market. The time: get there about 4:30 a.m.

Second, do yourself a favor and go to Yerba Buena Gardens on Monday night at 5:30 p.m. Expect a musical treat. Enrico Caruso was really in San Francisco during the earthquake and sang the previous night at the San Francisco Opera. It will be a Caruso night with good music and there won’t be any rain.

Saturday afternoon, April 15, 2:00 pm, “Chinatown Is Burning,” in the Koret Room at the Public Library, 100 Larkin Street, is the recreation of 15 year old Hugh Liang’s experience when he woke up to experience the earthquake and the fire in the context of the racism of the time in Chinatown. Any person unaware of life for Chinese in San Francisco at the time should make this a priority.