Tangled Up In Blue: Lessons for Police Reform? 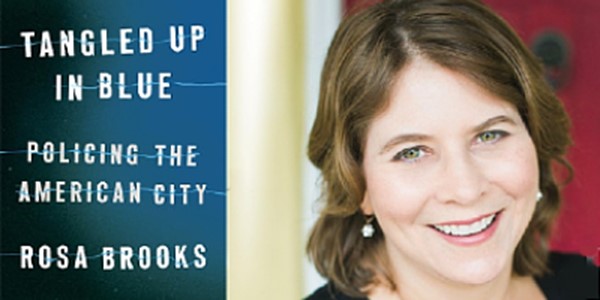 When I attended a Washington, D.C. law school in the early 1970s, everyone enrolled in its criminal law class was required to participate in the Metropolitan Police Department’s “ride along” program. Then, as now, “ride along” allows local residents to accompany police officers, out on patrol, in order to get a first-hand view of what police work entails.

My pre-law school interaction with the MPD, during protests against the Vietnam War, had not been friendly. In 1969, I was nearly trampled by a mounted police officer at President Richard Nixon’s inauguration. Later that same year, along with hundreds of others paying a call on the South Vietnamese embassy, I was blasted with CS gas and chased down Wisconsin Avenue. During the 1971 Mayday protests, I was among 12,000 people unlawfully detained by DC cops—after being tear-gassed again. One of my arresting officers took obvious pleasure in packing the patrol wagon that hauled us away with as many people as possible. The resulting rough ride was both claustrophobic and nearly suffocating, due to everyone’s CS-saturated clothes.

My first night out, riding in the back of a patrol car, just a few years later, left a lasting and different impression of police work. An older African-American officer was breaking in a much younger white cop, recently arrived from the police academy. Our route included DC’s “U-Street corridor,” still looking bleak, burned-out, and rubble strewn four years after rioting over Martin Luther King’s assassination.  The neighborhood, still many decades away from gentrification, had been invaded by drug dealers. Throughout the evening, the older partner provided the younger one with street survival tips—coaching him about how to approach a parked car, without getting shot or runover by the driver or intervene in a domestic dispute, without one or both combatants turning on the first responders.

As if to illustrate the difficulty of applying this advice—and the challenges of the job itself—our first 911 call, from a battered wife, turned ugly for all involved, pretty quickly.I came away from my “ride along” that night and others, with much greater appreciation for what cops, good or bad, dealt with on a daily basis, just a few blocks away from my own DC neighborhood, where open drug peddling, robberies, sexual assault, and gun fire were all too common back then.

Rosa Brooks, the author of Tangled Up in Blue: Policing The American City (Penguin Press) is a law professor at Georgetown University in Washington, DC, who didn’t settle for the ride-along experience. In 2015, to the amazement of friends and family–including her mother, Barbara Ehrenreich, the socialist-feminist activist and author–Brooks signed up to become a  Reserve Police Officer in the District of Columbia. Reserve officers are part-time volunteers who take police academy courses and get field training shorter but similar to that received by new full-time officers. After Brooks met these requirements in her mid-40s, she wore a badge, carried a gun, and had the authority to make arrests, albeit while working as few as three shifts per month. She ended up spending hundreds of hours learning to be a cop, patrolling with more experienced officers, and responding to a wide range of citizen complaints and problems in Anacostia and other parts of MPD District 7, “the poorest, saddest, most crime ridden part of the nation’s capital.”

As an outgrowth of this unusual role, Brooks got her law school to partner with the MPD on a “Police for Tomorrow” program. It brings promising young officers and civilian staff together for monthly discussions of topics much neglected by the academy. These include “race and policing, implicit bias, poverty and crime, DC’s changing demographics and the impact of gentrification on policing, mental illness, adolescent brain development, police use of force, and innovative approaches to reducing violence, over-criminalization, and mass incarceration.” Some members of a Georgetown student-faculty working group on racial justice (that Brooks was part of) “were vehemently opposed to anything that looked like helping the cops.” On the MPD side, a newly appointed DC police chief hoped that graduates of her program would become “effective change advocates” within his own department or other law enforcement agencies that might employ them later on.

A not insignificant biographical detail about Brooks is her mother’s famous exercise in under-cover journalism. Following in the footsteps of Ehrenreich—who took jobs as a Wal-Mart worker, house cleaner and nursing home aide two decades ago– Brooks writes about the life and work of police officers in the same funny, sympathetic, and frequently outraged fashion familiar to readers of the best-selling Nickel and Dimed. Ironically, Ehrenreich did not support her daughter’s brave under-taking, because her own past encounters with the police had been so traumatic. “I just don’t understand this police officer idea at all,” she told Brooks. “Police use violence to suppress dissent. They oppress poor people. They oppress minorities. That is not an incidental aspect of what they do. It’s at the center of what they do. Why would you want to join them?”

Instead of being every-day oppressors, the author watched DC police officers, like most others in their difficult occupation, “spend the vast majority of their time helping people who ask for their help.” Via 911 calls, they end up serving as “protectors, social workers, mentors, and medics,” who only rarely used “violence when needed to enforce the law.” More than most of her full-time partners, Brooks personally enjoyed “the social work aspect of the job.” In her new role as a uniformed “problem solver,” she was soon “mediating family disputes and dealing with people who mostly need parenting classes, drug rehab, or psychiatric care, not police intervention.” She discovered that “over policing of poor black urban communities is fueled by high demand for police services from members of those same communities” because, “when other social goods and services are absent or scarce, police become the default solution to an astonishingly wide range of problems.”

Nevertheless, Brooks also observed that interactions between her colleagues and civilians were often dangerously fraught due to the former’s academy training and on-the-job acculturation.

“The chief lesson at the academy was this: Anyone can kill you at any time…Week after week, we watched footage of cops getting attacked, injured, or killed. The world, it seemed, was a dangerous place for police officers; they were perpetually being stabbed, shot, punched, kicked, run over, drowned, poisoned by fentanyl, and bitten by savage dogs.”

On the job, this same warning about “constant mortal danger” was transmitted from veterans to rookies, regardless of the race, gender, or ethnicity of either group. According to Brooks, this left her fellow cops with an “exaggerated sense of risk” and related state of “hyper-vigilance.” As a training officer told Brooks, during an introductory ride through Anacostia, “everyone you meet here would be happy to kill you.” According to her white partner, “people here are different from you and me…[W]e don’t want to get in trouble or get hurt or go to jail. These people are so used to it, they just don’t care.”

Such rank-and-file fears are not conducive to building the one-on-one relationships that have contributed to “community policing” progress in Richmond, CA. and other cities with reform-minded police chiefs. And they are not supported by the stats. While police in the U.S. fatally shoot about 1,000 civilians annually, law enforcement doesn’t even rank among the nation’s top ten most dangerous occupations. Due to job stress and other factors, more cops are likely to kill themselves than become homicide victims in any given year.

Daily immersion in the myriad problems of the urban poor can lead to a corrosive cynicism, callousness, and disdain that, in Brook’s view, has “more to do with class than race.”This is why, she argues, “increasing the diversity of police departments is no panacea—implicit biases, class divisions, and powerful internal behavioral norms often combine to make minority police officers act in ways that are little different from those of their white peers.”   About half of all new recruits to the DC police force are African-American but Brooks believes that even most of them “weren’t comfortable talking about race” because, after all, “we’re all blue now.” As one African-American officer joked, “Why’m I here? Because the safest place for a young black male in this country is behind a badge.”

Brooks concludes with an additional warning based on the findings of her previous book, How Everything Became War and the Military Became Everything, a critique of the post 9/11 militarization of U.S. foreign policy. “One aspect of the expansion of our concept of war is that war and war fighting increasingly blur into criminal law enforcement and policing…The ‘militarization’ of the police is a by-product of this convergence…[P]olice officers are increasingly trained to respond to threats that resemble war as much they resemble crime, which has fueled increased police use of military weapons and tactics…”

As the author was completing Tangled Up in Blue last summer, the Minneapolis police killing of George Floyd “sparked a nationwide outpouring of anger and grief over police brutality and injustice.” While this diverse protest movement has yet to produce widespread reform—and calls to “defund” the police are, as Brooks notes, supported by only a quarter of all Americans—she remains hopeful that “Floyd’s death will lead to genuine and sustainable changes” involving a different “allocation of resources between police and social services.”

In the last twenty years, Nickel and Dimed has sold 1.5 million copies, become assigned reading in many high schools and colleges, and helped raise public consciousness about the need for minimum wage increases to help low-wage workers. It’s unlikely that Tangled Up in Blue will reach as many readers, but it deserves to be as widely read. In addition to their workplace exploitation, low-income Americans bear the brunt of problematic policing everywhere—particularly if they’re non-white. The movement for police reform needs more thinkers and doers like Brooks, who have the political insight, institutional connections, and insider experience needed to make real change happen, however small scale or incremental it may be.

(Steve Early is the author of four books about labor and politics, including Refinery Town: Big Oil, Big Money, and the Remaking of an American City, which deals, in part, with community policing in Richmond, CA. He can be reached at Lsupport@aol.com)