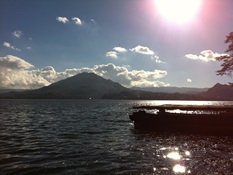 Most of us in the west—and in particularly, this west, the Bay Area, tend to think of yoga as the asanas—the actual bodily postures of the practice; the workout; the stuff that makes you sweat. But it hasn’t always been that way. Asana actually means “seat” or the “act of sitting down,” and until the end of the first millennium CE, asana just referred to a simple seated posture for meditation.

Then came along hatha yoga and non-seated asanas gained prominence; closer to the yoga you probably think of today.

Don’t worry; I’m not going to go over the entire history of yoga in this post—if you’re interested in that, you need to go to the Asian Art Museum and check out their absolutely beautiful and informative Yoga: The Art of Transformation exhibit. I went to the opening night celebration and look at that knowledge I just dropped. Boom.

From the very beginning of the night, I knew it was going to be special when my tickets were handed to me by a girl I graduated high school with—in Austin. If you’ve been reading any of my columns here, you know how I feel about coincidence; I don’t buy it. This girl was a gentle reminder from the universe, on a day when I was feeling a bit homesick, that no matter how far away we move, our connection to the ones we love—and even the ones we don’t think we do—remains just as strong. So thanks, ticket lady.

After chatting for a few minutes with my message from the universe, my roommate and I navigated our way through the throngs of people—people wearing cocktail dresses, jeans, t-shirts, and many filing down the stairs, in sweaty yoga clothes. We had just missed the yoga class, but we would have plenty of time to get sweaty later in the evening as the DJs took their sets and $*#& got crazy. But first, we had art to look at.

The exhibit will be up until May 25, and whether you consider yourself to be a yogi or not, I recommend that you go. Feel the magic, let it wash over you.

Which brings me to the second part of the evening: The dancing. Now, I’m going to let you in on a little secret; I am a terrible dancer. I can’t follow, I can’t lead, and I don’t really care to learn. But when it comes to moving around like an idiot, perhaps to a beat that only I can hear, to a rhythm more guided by my whims than the music, well, I am excellent at this. But on this night—perhaps it was the lights on high or the relatively few people dancing at first—I just couldn’t get comfortable. The whole time I was moving, I was in my head; I was thinking; I was not, despite the setting, practicing yoga.

And so, I stopped. I sat down in the middle of the dance floor in a meditative pose. Granted, at first it was simply to snap a photo for this post, but as I sat, breathing in—the vibration of the room as people danced and laughed around me; breathing out— the thoughts, the division between myself and the life that danced around me—I found it. That stillness. That yoga.

A few minutes later, I opened my eyes and stood up, once again feeling the weight of my body in this world of boundaries and lines. But somehow, they meant less now; they’d been muddied; blurred; and I couldn’t quite take them so seriously. So, leaving my thoughts behind, I joined the room around me, perhaps for the first time that evening, and danced. And sure, it may have looked a little something like this; but as Elaine so eloquently puts it, “here’s to those who wish us well, and those who don’t can go to hell.” Here, here.