by Alysabeth Alexander on December 7, 2005 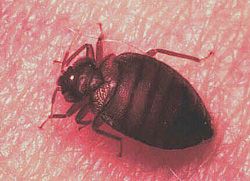 You cannot have missed the news by now-bedbugs are everywhere. But the worst of it is not that they plague the nation. Nor is it that they spread rapidly throughout the city, or that no one knows why and how they spread so quickly. The worst is that when it becomes personal, when these little vampires finally find you in your sleep and you become covered in those infamous itchy red welts, the infestation will grow to enormous proportions while you are running around trying to convince your landlord or city health inspectors that the problem actually exists. There are not enough resources to handle the bedbug explosion, and the strict requirements for a citation along with the lack of applying penalties to non-compliant landlords guarantees it will only get worse until our city makes some major changes.

I work with the Code Enforcement and Outreach Program, a project of the Department of Building Inspection, through the Tenderloin Housing Clinic. I work in apartment buildings and private and non-profit Single Room Occupancy residential hotels (SROs) in the Tenderloin, lower Nob Hill, and SoMA neighborhoods, and nearly every building I enter has someone with bedbugs.

While the local media identify the Tenderloin as the bedbug headquarters of the city, reports by the New York Times and CNN show middle- and upper-class people to be just as susceptible to infestation. Bedbugs are not inevitably a poor people’s issue, so let’s stop blaming mental health issues, homelessness, and second-hand furniture and start identifying some real solutions.

Through experience, I have identified three problem areas to tackle to begin addressing the bedbug issue: Public Education, Accountability, and Tenant Protection.

It took most of my clients months to realize their problem was bedbugs. They thought it was fleas, ants, scabies, spiders, or a rash, and some of them went to free clinics outside their neighborhood and were told, “You live in the Tenderloin – who knows what you have.”

In addition, bedbugs are difficult to find. The nymphs are roughly the size of a dull pencil tip and clear, the eggs are clear, and the adults are _ inch and brown but hideout away from beds and couches during the day. Through outreach, building meetings, and posting flyers around the neighborhood, we are doing what we can and other neighborhood activists are doing the same. But a citywide and city-funded public education campaign could stop building-wide infestations where they start: with one infested unit.

Again, health inspectors must do a better job of holding managers and landlords accountable for allowing bed bug problems to persist. Tenants need accountability for landlords, managers, or lessees for improper extermination or ignoring known infestations. The Department of Public Health (DPH) needs to start fining non-complaint landlords, as they have the capability to do.

Bedbugs are so tenacious that even a nearly perfect extermination process can, at times, lead to re-infestation, since the bugs can lay eggs in the walls and under floor boards. In some buildings the infestation is so bad and cases there become so personally complicated that extermination will be very difficult and will certainly not be immediate. This requires that city officials ensure any extermination program is rigorously enacted.

DPH also needs to be held accountable for its own response to bedbugs. There are some inspectors who stay in close contact with tenants, and who call city services for those who are having a difficult time with the extermination process. There are also those who do not, and this needs to change. Tenant contact needs to be required by inspectors, and if that means more inspectors, then let’s do it!

I have heard time and time again that people waited weeks to hear back from DPH inspectors who then never visited them. An inspector recently told me that a pest control worker had walked around in his white socks and therefore the unit in question did not have bedbugs. That does not make any sense. In one apartment building, a tenant who had bedbugs was ignored for a few weeks during which the bedbugs spread to the neighbors. Tenants left because the landlord sprayed cockroach spray and the problem continued, he told them they were crazy, and generally harassed long-term, rent control tenants until they left.

City Inspectors from the Department of Building Inspection (DBI) and DPH will not cite unless they see a bedbug, at least practically if not by policy. Sometimes this is not a problem, as the there may be visible bugs everywhere. However, when they’re not, inspectors should be allowed to cite for bedbugs if the tenant has bedbug bites, which are often times identifiable. Because we are in a time of crisis in terms of the bedbug infestation, we must err on the side of citation and extermination.

Negligence is costly to tenants, especially those with compromised immune systems, elders, and families. In addition, a severe bedbug infestation can cause a long-term tenant to move out of their unit, thus costing them their rent-controlled unit.

Bedbugs are blood-sucking insects that cause severe itching, can cause anemia, and scientists say may be able to spread diseases (although it has never been recorded). Tenants think they are dirty because they have them, people feel ashamed to have friends over, and they look around and blame their neighbors because their landlord is blaming them and they feel frustrated.

As a city, let’s not fall in to that trap. Rather than blame those who get bedbugs, let’s admit that it is a public health issue, and increase the city resources going into bedbug cleanup. Let’s create a bedbug inspector at DPH and fund outreach efforts to tenants, create easily-accessible accountability systems, and penalize non-complaint landlords and managers. Let’s ensure inspectors are trained and required to use city agencies and contact tenants when working with them to rid their units of bedbugs.

This problem is complicated, but simple steps can lead us in the right direction if only we will invest the resources.