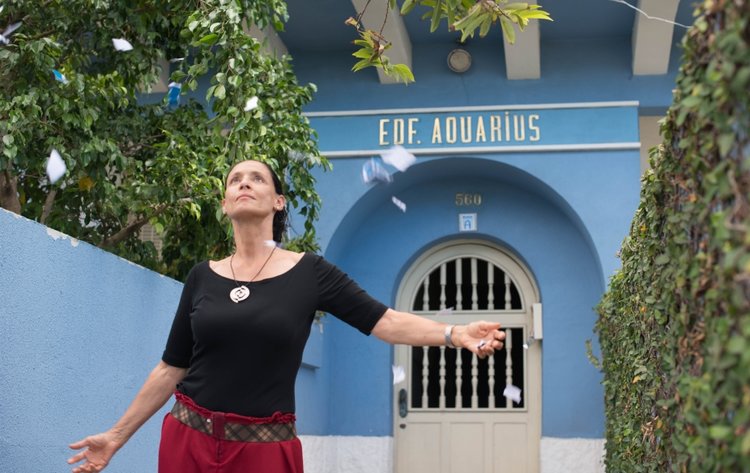 Filho is probably unfamiliar with San Franciscans’ fights against the Beast on Bryant or the weed-like expensive condominiums sprouting all over the Mission District.  It’s safe to say, though, that he’d be a kindred soul to such anti-gentrification efforts given the plot of his film.

Clara (Braga) is a retired music critic who lives in the film’s titular apartment complex, a beachfront building in the northern Brazilian coastal town of Recife.  What was once a complex bustling with families and life (as seen in a 1980 flashback) has been reduced to a building where Clara is the sole tenant, assisted by her housekeeper Ladjane.  The old critic has no intention of leaving Aquarius or her apartment until she dies.  Why should she give up this beautiful sunlit living space filled with the ocean breeze and her eclectic music collection?

A corrupt and powerful property development company owned by Geraldo thinks otherwise.  Beachfront condo towers have popped up like fungus in Clara’s neighborhood.  Visions of mountains of Brazilian Reals dance in the eyes of Geraldo and project manager Diego, Geraldo’s grandson, at the prospect of adding another such tower to the area.   Diego’s name for the project, The New Aquarius, doesn’t disguise for Clara the developer’s plans to disrespectfully knock down the old but hardly decrepit building she lives in.   But where tons of potential profit is concerned, “No” is not an acceptable answer to Diego.

Naysayers are correct that Clara’s situation differs in some respects from the average economically displaced Mission District resident.  Ownership of five properties (probably a legacy of her late husband) and having a regular housekeeper makes her financially privileged.  Yet in the way that matters the most, Clara is impacted by Diego’s gentrification plans.  The Aquarius apartment is where Clara has established strong emotional roots, such as its being the place where she raised her children to adulthood.

Clara’s obstinacy doesn’t stem from a wholesale rejection of change or new ideas.  She welcomes MP3s instead of clutching her old vinyl albums and CDs closer to her chest.  But her preference for objects from the past comes from recognizing their value as symbolizing life’s moments.  An anecdote about a discovery inside a used vinyl copy of John Lennon’s album “Double Fantasy” offers a reminder of how the seemingly banal can turn into the touchingly poignant.

Diego fails to see the value of cherishing the old 1940s-constructed beachfront building.  The construction project manager’s name for the replacement isn’t chosen out of admiration for the existing building.  His handsomeness and affability may distract less observant viewers into assuming this might be an innocent offense.  But Clara clearly sees that calling the proposed building The New Aquarius is an attempt to manipulate her with sentiment.  The lure of much money makes the pointless tearing down of the existing Aquarius feasible.

The greedy desire to get rid of Clara and knock down Aquarius leads Diego to resort to dirty trickery to make life unpleasant for the old woman.  A very noisy sex party and a very loud religious celebration are just two of Diego’s tactics.

Clara’s resistance to Geraldo’s and Diego’s efforts to push her out provides the principal dramatic conflict in “Aquarius.”  But that conflict is not the entire movie.  It’s also an entertaining study of Clara and the neighborhood she considers her home.

It’s uncertain whether Filho intended the film’s title to also have astrological allusions.  Clara’s refusal to sell and her music critic career do match the stubbornness and need for intellectual exploration of those born under the water-bearer’s sign.

Yet it’s definitely clear that Clara has a strong appetite for experiencing life on her terms.   Whether it’s participating in a laughing club or dancing with a handsome elderly man, age has not dimmed her openness to new sensual experiences.  Even the discovery that a drug dealer operates at the beach fills her with curiosity rather than fear.  When she naps to the sounds of Recife traffic, it feels as if she’s sleeping in the cradle of life.

The film’s musical soundtrack conveys how Clara is emotionally ensconced in both her Aquarius apartment and in daily Recife life.  It’s a mix of everything from Brazilian songs unfamiliar to American audiences (e.g. Reignaldo Rodrigues’ “Recife, Minha Cidade”) to the Queen song “Fat Bottomed Girls.”  The subtitles don’t include translations of the non-English lyrics, so there is no clue whether a particular song is intended as commentary on some of the film’s events or images.  But even without the words, the emotions come through quite clearly in the song’s melody and the singer’s tone.

Nearly dying at a young age from breast cancer may have helped sharpen Clara’s appreciation for such delights as a walk along the beach with her favorite nephew.  Yet whatever the cause, the retired critic’s approach to living contrasts sharply with what seems like a current cultural obsession with shielding oneself from interacting with life (e.g. music as a barrier against interaction, condos which seem more like glass and concrete fortresses).

Despite “Aquarius”’ many virtues, it will not be in the running for a Best Foreign Film Oscar.  Filho’s very public protests at Dilma Rousseff being ousted from the Brazilian presidency earned retribution from the Brazilian government.  The highly under-amused officials appointed to Brazil’s Oscar submission committee a pronounced anti-Rousseff and anti-Filho film journalist.

Filho’s excellent and quietly political film deserves far more than a “blink and you’ll miss it” theatrical run.  This superb film requires the appreciation of those who understand cherishing place and history matters more than bloating one’s bank account.