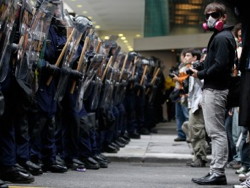 Who called who first? Did the Obama alumni Association in Chicago — David Axelrod, Rahm Emanuel, and Bill Daley — get nervous and call the White House, or was it Barack himself, having disposed/co-opted one threat by the name of Netanyahu who recognized he had a more serious problem on the horizon.

The President has been playing Ronald Reagan these days, talking tough while feinting towards the center. What he most decidedly does not want to do is play Hubert Humphrey and relive the summer of 1968 in Chicago. That’s why the G8 meeting was shifted from contested ground there to safe space in the ultra secure well-guarded environment of Maryland’s Camp David.

The last thing the president needs in the middle of his campaign is another police riot in the second city.

Someone must have pointed out that the Occupy Movement was already in the process of planning another battle ala Seattle in the very heartland of the Obama Empire. Even the editor of Adbusters, who issued the call to occupy Zuccotti Park last September now had his megaphone fixed on the Second City.

The world movement that has mobilized to confront so many G8 had this one in its cross-hairs for month.

Sweet Home Chicago was in line to become a sweet home for a world of angry protesters, not just Americans.

That had to be stopped or diverted, and it was.

But first, there was the passage of a draconian new anti-protest law with bi-partisan support and little press attention.

The National Lawyers Guild explained: Just when you thought the government couldn’t ruin the First Amendment any further: The House of Representatives approved a bill on Monday that outlaws protests in instances where some government officials are nearby, whether or not you even know it.

The US House of Representatives voted 388-to-3 in favor of H.R. 347 late Monday, a bill which is being dubbed the Federal Restricted Buildings and Grounds Improvement Act of 2011. In the bill, Congress officially makes it illegal to trespass on the grounds of the White House, which, on the surface, seems not just harmless and necessary, but somewhat shocking that such a rule isn’t already on the books. The wording in the bill, however, extends to allow the government to go after much more than tourists that transverse the wrought iron White House fence.’

Under the act, the government is also given the power to bring charges against Americans engaged in political protest anywhere in the country.

Next, the law, coming on the heels of the NDAA, had to be broad enough cover most contingencies:

The new legislation allows prosecutors to charge anyone who enters a building without permission or with the intent to disrupt a government function with a federal offense if Secret Service is on the scene, but the law stretches to include not just the president’s palatial Pennsylvania Avenue home. Under the law, any building or grounds where the president is visiting — even temporarily — is covered, as is any building or grounds “restricted in conjunction with an event designated as a special event of national significance.

It’s not just the president who would be spared from protesters, either.

While some are demanding that the President veto it, it may be that he was part of the network that signed off on it and the change of venue.

While the G8 is moving, plans for a large NATO meeting in Chicago are continuing, and protest activists told the Chicago Tribune, they are not going to be deterred:

“Early word from protest organizers was that if the move was intended to slow them down, that wouldn’t happen. The main thing is, the protests will go forward,” said anti-war protest leader Andy Thayer. “We believe that NATO is, frankly, the de facto military arm of G-8 and anybody who’s upset with G-8 should be upset with NATO.”

“Because G-8 is being moved to a remote highly secure location, Thayer said Chicago will still be a magnet for large demonstrations. I believe that people will very much focus on Chicago. So much organization has already gone into this,” he said, adding that groups will tinker with their demonstration plans rather than abandon them. “We’re going to have a quick consultation to see whether we need to move our demonstration from the 19th to the 20th.”

Unless martial law is imposed or the first amendment is suspended, as it was in that Transformers movie shot in Chicago, activists will be showing up in what promises to be a growing spirit of confrontation.

“Moore said many of the protesters opposed to G-8 policies may still show up, because “they are so geared up to do it. NATO is still going to attract demonstrators,” Moore said.

“We are still going to need a lot of security for these world leaders, including the president. All it’s doing is lessening a little bit of the international luster.”

Ald. Scott Waguespack, speculated that the president ultimately was more comfortable with the security and tranquility at the presidential retreat. “Nobody can get near Camp David,” he said.

But he said the city should still expect a large contingent of protesters — to both G-8 and NATO policies.

Years ago, when I was at The London School of Economics, I received a letter inviting me to Chicago for the 1968 Democratic convention. No it wasn’t from then Mayor Daley but from my Yippie friend Abbie Hoffman who predicted a hot time in the old town that was burned down by Mrs. O’Leary’s famous cow. To this day, I regret not going, but I asked Abbie to look after my London friend John Froines who planned to be in town that month.

Abbie did—and John, a scientist and fellow anti-Vietnam War protester quickly became one of the defendants in the Chicago Conspiracy Trial.

He never let me forget it.

I am hoping to be there this time because it promises to showcase the revival of the Occupy Movement that so many are hoping for.