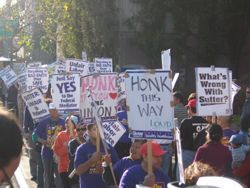 There they were, the usual suspects, stereotypes from Upton Sinclair’s novel, “The Jungle.” Replacing Big Meatpacking in the blood-red waters were the new circling sharks — Big predatory Healthcare. Instead of cattle entrails, human fluids, blood, and tissue were splattered on inadequately cleaned hospital walls and floors. Sunset Scavengers refused to pick up contaminated needles discarded in the trash outside, among which the pigeons pecked.

A queue of nurses told how displacement of low-wage employees by squadrons of even lower-wage “replacement workers” savaged patient care at CPMC’s three sites, pitting underpaid against poorer.

Communications Director, Cynthia Chiarappa insisted the strike had “no impact on our ability to provide high quality health care.” Strikers hissed and booed.

Vickie Bermudez, Regulatory Policy Specialist for the California Nurses’ Association, testified that “the absence of assistive personnel, housekeeping, dietary, laundry, and central processing service,” and an “inadequate screening, orientation, and competency validation of the replacement staff” has compromised patient care.

One R.N. refused to work with replacement nursing assistants who couldn’t report abnormal vital signs. Sloppy “cleaning” is done by untrained people who don’t understand the serious blood and body fluid hazards in their scab jobs.

Tissue and blood products from surgeries and labor and delivery areas are left in basins for the next pregnant mother to discover.

Diane Wayna, confessed through tears, ” These people out there on the line are worth their weight in gold. I didn’t realize how good a job they did.”

According to SEIU pickets and organizers, this is a Corporate corruption story – Race and Class-War style.

The muted bong of the two-minute bell punctuated each impassioned speech.

The grievance is not primarily about pay, but about workers having a voice.

In a Board hearing, caregivers urged Sutter to settle the contract according to a set of uniform standards to which other hospitals agreed — “a real voice” in increased staffing to lighten heavy workloads, a fast and fair election process, a Master Agreement, and funds for training and education through which, for example, certified nursing assistants could upgrade training to become registered nurses.

Peskin reviewed August 29 e-mails between the mediator, the union, and CPMC Director Martin Brotman.. Sutter Health apparently pressured CPMC to alter the contract title and language. Borsos testified, “We rejected that. It changed the mediator’s recommendation for settlement to something less.”

“This dispute is not about wages and benefits,” Chiarappa continued, “but union leaders’ demands that would place a gag order on physicians, nurses, and hospital management from talking with employees about union representation… Placing a gag order on one side and not the other is not fair.”

Later on the CPMC line, David Colburn, Rehab aide, explained Chiarappa’s concern. Management wants to conduct one-on-one meetings about unionism with non-union workers in a room with a boss who could potentially fire them. “No words have to be said,” said Colburn. “It’s intimidating simply to be in the room under those circumstances. That’s the kind of thing we want to eliminate.”

Peskin asked if Chiarappa had a copy of the mediator’s “unfair” recommendation.

“I do not have that with me today.”

Supervisor Daly reminded Chiarappa that management’s legions of lawyers would have such documentation if it, in fact, existed.

Peskin said he read the mediator’s proposal, and “Mr. Brotman’s piece in ‘The Business Times’ where he (too) said — this has nothing to do with wages and benefits or patient care (but) with the union’s desire to organize and expand.

“Section 247… says that the employer…may contact employees who wish to organize. I don’t see this gag order.”

Peskin continued the hearing to Monday, October 24, urging a higher level CPMC official like Dr. Martin Brotman, to “come down here and talk to us.”

When Paula Likens, Community Relations Manager, raised her voice calling strikers noisy and unclean, Peskin gaveled her out of order, “It is precisely this kind of arrogance…that has this going on.”

Managers then made a great show of filing out of the chambers.

On the Sunday, October 23 CPMC strike line, most doubted Brotman would show. Said Colburn, “I’m skeptical. I think they are that arrogant.”

Martin Brotman, in fact, did not present himself at the Monday, October 24, San Francisco Board of Supervisors hearing. President Peskin announced he had been in touch with Brotman by phone. Brotman had told him there could be positive developments before the end of the week.

Said Andi Bruce, “CPMC is the most profitable Sutter. If this chain was paying its taxes to the San Francisco Treasury, we wouldn’t have fire stations closing or the police department in a three-year hiring freeze.”

To qualify for nonprofit status, Sutter should provide 10% charity care, but provides 2% to 5%.

Sutter charges some patients 50% to 60% above area hospitals.

WORKERS DEPRIVED OF A VOICE:

Bruce said Sutter’s refusal to give workers a voice is classist. He described Sutter as philosophically opposed to unionism. “Kaiser or Catholic Healthcare West would have said, ‘Forget it. Let’s give it to them.’ Sutter’s response to our demand for staffing arbitration is ‘ I don’t want (workers, who coincidentally do the jobs every day) having a voice and telling me how I should staff this hospital.'”

Said Brenda Jensen, CNA, “I go to staff meetings, and my voice isn’t heard. “You’re (just) one of the health care workers.’ “

I asked Bruce, Is Sutter/CPMC unrepentantly hard-core corporate, racist, and classist toward people who make far less than they do?

“Yes. Van Johnson, Sutter CEO, just retired (to) be a missionary for the Church of Latter Day Saints. Before he left, (he) gave himself a 60% raise. He ended up at almost $2 million a year.”

California site organizer, Michael Bender stated that “Their spokesman saying patient care hasn’t deteriorated probably hasn’t been on a nursing unit for weeks or months . That (is not) coming from the people doing the care.”

Of CPMC corporate racism and classism, Keith Herbert, California site Housekeeper said, “It’s obvious that a corporation like Sutter and CPMC — their feet don’t touch the ground. They don’t usually walk amongst the people.”

Organizer Bruce verified, “Staffing is definitely classist. They put the biggest burden on nursing assistants, LVNs, or housekeepers who clean 15, 20 rooms. You are not going to do a good job with that many.”

An “At Will” employer unrestricted by a union has arbitrary power to replace CNAs and LVNS with “travelers,” floater nurses that management shifts around with versatility. Permanent nurses are sent home early. “Travellng is the healthcare industry’s answer to outsourcing.”

Brenda Jensen, 7-year CNA at CPMC, told Supervisors she cares for 18 people without breaks, getting vital signs, feeding patients, changing diapers, moving post-surgical cases to and from commodes and procedures. She has no time to remove patients’ dentures at night.

Romero and Rudy, California campus Housekeeping workers want “safe staffing.” They are required to work two people’s jobs plus overtime. They feel pressure to do more. “If the room is dirty, if the restrooms are not clean, the patient and the family suffer.”

SEIU/UHW is asking for a real training and education program up to the local $1,000 standard.

Bruce emphasized that, though housekeeping is a necessary ,job, “We are saying somebody shouldn’t be stuck there. If they want to upgrade their skills, even housekeeping skills, Sutter should invest in its workers like they invest in a building.”

“Sutter’s hiring practices are as racist as any profit-making business,” said Bruce. “They don’t hire these people for normal jobs. When the strike is over, they are fired.”

Said Bruce, “They have gone into poor communities, to projects,” and simply asked, “Who wants a job?”

Scabs make $10 to $15 an hour, though not as much as regular CPMC workers. CNAs make $19 to $28. Scabs know they will neither be turned away nor suffer background checks.

At CPMC, a burly, black-suited Rent-An-Enforcer told me he was from the Steele Foundation, analogous to Blackwater, a private soldier of fortune company.

“I just got back from Katrina. I’m like a secret service agent who guards the President” Such hired soldiers protect political figures, athletes, celebrities, CEO’s, business leaders, and senior management.

While a few strikers huddled for warmth around a propane heater on the dark sidewalk, the Steele mercenary said he was protecting hospital executives from violence.

According to Bruce, several guards returned to Iraq, for the $200,000 a year.. They expressed frustration at having no guns, unable to control the strikers walking past them outside and the scabs inside stealing Viagra and M.D.s laptops.

The reason for “men standing around with the secret service thing in their ear like the FBI” — was intimidation. “They are telling us, ‘This is a war.'”

“They are afraid of our union growing,” Colburn explained.

If the union wins at Sutter/CPMC, especially with the AFL-CIO split, other hospitals countrywide may lose power over a huge swath of the national workforce.

The power balance between organized labor and corporations could be deeply effected by the CPMC strike.

As of Thursday evening, October 27, strikers on the line outside the California and Davies campuses related rumors of a Friday settlement. Brotman’s Monday promise to Peskin, however, had not yet materialized.