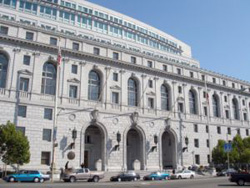 In a troubling ruling on tenants’ ability to sue landlords, the California Supreme Court ruled 5-2 on August 2 that landlords filing bad faith lawsuits against tenants are virtually immune from liability. The Court’s long awaited ruling in Action Apartment Association v. City of Santa Monica, S129448 did preserve a tenants’ right to sue over a bad faith eviction notice, a longstanding right that had been revoked by the Court of Appeal. The decision follows a national trend in overthrowing longstanding precedents in order to benefit the rich and powerful. While the tenants’ right to sue for wrongful eviction survived, the decision reflects a hostility to tenants rights—and an encouragement to bad acting landlords—that is the norm among California’s judiciary.

The Action Apartments case involved a simple issue: does the state’s age-old litigation privilege, drafted to prevent litigants from being sued for defamation for what they say in court papers, apply to bar lawsuits against landlords trying to illegally evict and/or harass tenants?

The answer, for many reasons, was obviously no. Why would the State Legislature seek to protect wrongful landlord conduct through a statute of general application without specifically stating such?

Further, no appellate decision in California had ever applied the state litigation privilege to invalidate a local ordinance absent express statutory language. There is nothing about tenant evictions or harassment in the litigation privilege, while numerous state law provisions—including the Costa-Hawkins law—recognize localities traditional power over land use laws.

But a rabidly pro-landlord Court of Appeal panel in Santa Monica turned all legal history on its head, and sought to make it even easier to illegally throw tenants out of their homes. Its decision killed all lawsuits by tenants against landlords for wrongful eviction or harassment, and raised a fury in rent control jurisdictions across the state.

The Supreme Court granted review, and the case has been sitting around for two years prior to yesterday’s ruling. It is clear from the court’s decision that it did not spend this time learning about the actual realities of landlord-tenant life, as its ruling reflects a mindset of a panel that came of age prior to there being a need for rent control laws in California.

The bottom line is this: the California Supreme Court is encouraging landlords to illegally evict tenants, and to try to illegally harass tenants out of their homes. They are accomplishing this by making it harder for tenants to sue for such conduct.

The Court did not exercise the malice toward tenants of the Court of Appeal, for it did not say that suits by tenants are barred entirely when a fraudulent eviction notice is issued. But the court gave bad landlords one more argument to make against such cases.

This could result in more wrongdoers getting away with victimizing the vulnerable. A landlord who could convince a judge that he issued the fraudulent notice in a good faith intent to proceed to court could now escape liability.

Both landlord and tenant activists are mystified at why the court, after taking so long to decide the case, left so much unresolved. The best guess is that this was the only ruling that could get four votes, and the majority did not want a five-member plurality writing three different opinions.

In the big picture, this is another case of a longstanding tenant right, a right everyone took for granted, being weakened by activist pro-real estate judges. This has happened time and time again in Ellis Act cases, and it is fair to say that activist judges have caused much of the misery suffered by tenants in San Francisco.

Supreme Court and appellate judges do not know anyone facing bad faith evictions, but they do socialize with landlords who pass on their complaints about nasty tenants who refuse to vacate upon demand. We have a judiciary ruling in tenant cases not by legal interpretation but by anecdote, and these anecdotes inspire them to bring “justice” to real estate speculators and illegal evictors.

My organization, the Tenderloin Housing Clinic, was on the losing end of a Court of Appeal ruling that said nonprofits could not practice law in California. This crazy ruling brought legal groups across the state to demand Supreme Court review, which ruled unanimously in our favor.

What was clear to everyone involved was that the Court of Appeal never would have been issued against a nonprofit that helped consumers, fought gender discrimination, or defended civil rights. It was our work representing tenants that made us fair game for judicial abuse.

And that’s the best way to understand the Supreme Court’s holding in Action Apartments.