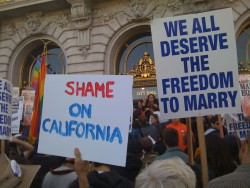 In 1964, Stanley Kubrick produced the Cold War film Dr. Strangelove, or “How I Learned to Stop Worrying and Love the Bomb.” By upholding Proposition 8, the California Supreme Court has learned to stop worrying and love the initiative process. It’s an apt analogy, because yesterday’s decision leaves an unchecked power of the voters to strike a “bomb” through our basic Constitutional protections. Not only did the Court minimize Prop 8’s effect on the right to marry, using logic that contradicted last year’s decision on the same subject. It set up a dubious distinction between “amendments” and “revisions” to the state Constitution, which will allow virtually any ballot measure to pass as a mere “amendment.” Without adequate safeguards that a “revision” was meant to place, equal protection is no longer sacred – because the power of the ballot is supreme. At the same time, the Court ruled that the 18,000 same-sex couples who legally wed last year are still married – because to invalidate these licenses would be an undue violation of due process and property rights. While that was a wise decision, it remains a mystery why such a right is more important than equal protection.

California is famous for its wacky initiative process – where the voters get to decide on a myriad of complicated matters, much of which could arguably be better left to elected leaders. But the grounds for overturning Prop 8 was not about the 48% of voters who disagreed with taking marriage rights away from same-sex couples. It was that some rights are too important to be stricken by mob rule, and the state Supreme Court’s job is to protect these constitutional protections – even if a bare majority of the electorate (without safeguards) wants to change the Constitution. The Court has declared “open season” on the rights of all minorities, setting a dangerous precedent for future elections. Here’s why …

Court Contradicts Itself on the Term “Marriage”

This opinion clearly contradicts last year’s ruling – where the Court said the very term “marriage” was a necessary component, so that same-sex couples can have their family relationships accorded the “same dignity, respect and stature of others.” What the Court effectively said today is that gay people didn’t really lose anything substantive with the passage of Prop 8. But if true, they also did not gain anything important from last year’s Court decision. Back then, the Court made it clear it was a crucial right.

The Unchecked Power of Voters to Change the Constitution

Granted, the Court will say Prop 8 changed the state Constitution – and thus last year’s interpretation is irrelevant and obsolete. But while the people have “sovereign power” and can “alter or reform” the Constitution as they see fit, our framework does not allow them to make all changes to the state Constitution. A minimum threshold of voters can collect signatures to put an “amendment” on the ballot, but only the state legislature – or a constitutional convention – can initiate a major “revision.” And the Court failed to understand both the history and basic structure of this distinction.

Before 1911, California did not have an initiative process – and all “amendments” had to come from the state legislature. Every state that distinguishes between “amendments” and “revisions” (and California based its constitution off New York) has a common thread – none of them allow the people alone to make the most profound changes. An “amendment” to the California Constitution is there to “improve” the existing framework, but a “revision” would substantially alter its “substance and integrity.” Even states that passed equivalents of Prop 8 only generally did so after the legislature put it on the ballot.

The Court said Prop 8 was not a revision because it “simply changes the substantive content of … one specific subject area – the … designation of ‘marriage.’” It did not alter the “scope” of the Constitution, and only has a “limited effect on the fundamental rights of privacy, due process and equal protection.” The Court even implied that only changes affecting a wide spectrum of our Constitution are protected from the whims of the public opinion – and explicitly said that a revision is not anything that “abrogates a foundational constitutional principle of law.” Based upon the Court’s narrow definition, it is hard to see how any change to the Constitution would qualify as a “revision.”

Open Season on the Rights of Minorities

Prop 8 is a major change to the Constitution that cannot just be left to the voters, because it deprives equal protection to a specific minority group. But the Court quietly dismissed this concern, because it was not the first time in California history that a majority took rights away from a minority. In 1964, the voters passed a measure allowing homeowners to racially discriminate when selling their property – which was struck down in federal court. In 1996, California passed Prop 209 to repeal affirmative action. And in 1894, the state passed a measure to deprive voting rights for anyone who didn’t speak English.

How did the Court conclude that none of these ballot measures were revisions? At the time, no one sued to have them repealed for that particular reason – a dubious basis to conclude that they were therefore proper “amendments.” According to this Court, it is acceptable for the voters – without any scrutiny by the legislature or a constitutional convention – to amend the Constitution to repeal basic rights from a minority group.

This creates a dangerous precedent. What if, after September 11th, California had passed an amendment requiring Muslims to travel with passes? The Court dismissed such concerns as a “dubious factual premise of a highly unrealistic scenario of future events.”

But Property Rights are Protected …

If there is one bright spot from yesterday’s Court decision, the 18,000 same-sex couples who wed before November 4th are still legally married – despite efforts by Kenneth Starr to convince the Court otherwise. California law presumes that ballot measures are not retroactive, without clear and unambiguous proof that it was the voters’ intent. But the Court also pointed out that these couples had acquired “vested property rights as lawfully married spouses,” and to suddenly take their licenses away would be a blatant violation of due process.

It is unclear why the Court believes the “will of the people” is more important than the equal protection rights of minorities, but not the due process of property owners. If we are to take the Court’s logic on what constitutes a valid “amendment” and uphold the validity of Prop 8, anything that doesn’t obviously change the “scope” of the California Constitution can be enacted by the voters – without any restrictions. By that rationale, due process would take a back seat – and the 18,000 marriage licenses would be null and void.