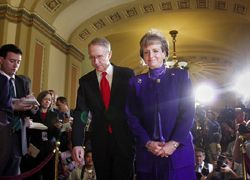 President Bush’s nomination of Harriet Miers to the Supreme Court is being analyzed as if her future performance on the bench is a great mystery. But some questions have simple answers. Miers has dedicated her life to advancing the political career of George W. Bush. As such, she would never cast a vote that would lower Bush’s support among his conservative base. Miers’ confirmation would be akin to giving Bush his own vote on the Court—but unlike his presidential term, Bush’s Supreme Court vote could last over two decades. ##M;[more]##

The mainstream media never fails in its efforts to find complexity and ambiguity in even the most obvious situations. Case in point: the notion that Harriet Miers, who believes George W. Bush is the smartest and most talented man she has ever met, would be anything but a Bush rubber stamp on the Supreme Court.

If you think my take is a knee-jerk lefty response, read what the Wall Street Journal said about Miers:

A longtime friend of the president who has served as his close personal and political adviser and confidante, no matter how fine a lawyer, can hardly be expected to be sufficiently independent-
especially during the remaining term of her former boss.


For reasons that may require mass psychoanalysis to fully understand, the national media continues to treat George W. Bush not as the right-wing ideologue that his record shows, but rather as the “uniter, not a divider” that ran for President in 2000. The result: the media floats the bizarre notion that one of Bush’s closest aides and greatest admirers is something other than a right-wing ideologue.

While the Christian Right fakes out the media with its own criticisms of Miers (“The Liberals and Conservatives Find Themselves in Awkward Spots” says the New York Times), the facts say otherwise.

One thing Miers shares with her boss is a deep faith. She was introduced to the Valley View Christian Church in Dallas by Justice Hecht of the Texas Supreme Court. ‘Harriet has placed her faith in Jesus,’ said Rev. Ron Key, the
longtime pastor there until recently. She may have been religious before, but it’s become more of a priority, more of a focus of her life. (The Times)

This is the appointee Democrats are said to be “relieved” to be considering. The chances of her casting a Supreme Court vote opposed by George W. Bush are the same as that of Condi Rice speaking out against her mentor’s policies: zero.

Had Bush appointed a known right-wing ideologue like former California Supreme Court Justice and current Federal Appellate Justice Janice Brown, she would never have got through the Senate. But Brown would likely be an improvement on Miers, because whereas the former is driven by an ideology that could occasionally bring her to a progressive result, the latter’s own ideology is “vote as George wants me to.”

And George W. has never produced a progressive policy result, even by accident.

Amazingly, following widespread media criticism of Bush cronyism around appointments to FEMA and the FDA, the Presidents got a pass for claiming that Miers is not a crony but rather the “best person qualified” to be on the Supreme Court. What Bush actually meant was best person who can be absolutely counted upon to vote his way.

If Roosevelt had no problem telling judges how to rule, does any one believe George W. Bush would be so constrained?

I am not among those who criticized Democrats for voting to confirm Chief Justice Roberts. He was clearly qualified by both intellect and experience, and cannot be worse than his predecessor, the racist William Rhenquist.

But Miers replaces Justice O’Connor, who, though a Reagan appointee, had none of the personal loyalty issues that will prevent Miers from properly adjudicating cases.

Any Democrat supporting Miers has basically agreed to turn the Supreme Court over to right-wing extremists. She is precisely the type of nominee for which the Democrats entire filibuster fight-which got Janice Brown her powerful DC Court of Appeals seat– was supposedly designed to stop.

In the coming weeks, the media will try to separate Miers from the right-wing ideologue whom appointed her. But the case against her is obvious, and Democrats should not be deceived.