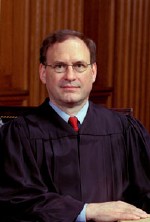 In perhaps the quickest decision in its history, the United States Supreme Court ruled on April Fools Day that the free market could not withstand compensating victims of sex discrimination and that the nationwide class action case brought against Wal-Mart – for which oral arguments were heard March 29 – must be reversed. According to the 5-4 opinion written by Justice Alito, class action suits for discrimination are not available “absent a written statement promoting a purely discriminatory hiring policy.” Alito had signaled his view that sex discrimination should not be actionable during oral argument, when he stated that if a company’s pay and promotion is “typical of the entire American work force,” then it should be immune from a Title 7 claim. Women and labor activists denounced the ruling, saying that the nation’s highest court has overturned fifty years of legal precedents in order to promote discriminatory hiring practices against women, racial minorities, and other groups covered by Title 7.

After an oral argument that reminded many of the judicial proceedings in the antebellum South, the United States Supreme Court dismissed a nationwide class action lawsuit only two days after its hearing. Stating that the country could not wait a minute longer than necessary to protect large corporations from discrimination claims, the Court held up Wal-mart as a nationwide model of corporate citizenship and expressed outrage that plaintiffs and their attorneys were trying to stop the company from discriminating.

While some were surprised that the Court went beyond the issues before it to throw out over forty years of Title 7 case law, the same five judges did the same for campaign financing laws last year in Citizens United.

The case, Walmart Stores v. Dukes, No. 10-277, reached the Supreme Court on the issue of whether the plaintiff class was too large and the commonality of questions too narrow to be treated as a class action. But it immediately became clear from the oral argument that at least five judges had no problem sex discrimination, and felt it was their role to help corporations promote it.

As Judge Alito explained in his opinion: “Once we allow discrimination to become actionable, employers could be punished for honestly believing that women workers are entitled to lower pay, or that they are only working for ‘pin’ money. Even when gender-base stereotypes are not always true, they are part of the fabric of American society. It makes no sense to blame Wal-Mart for simply implementing the longstanding retail industry practice of paying women less than men, and promoting them less.”

Legal experts were horrified by the Court’s analysis, though none would go on record for fear of alienating the judges in future cases. Speaking on condition of anonymity, a prominent professor told Beyond Chron, “We knew something was fishy when Justice Scalia did not recuse himself despite the fact that his son Eugene is a partner in the law firm defending Wal-Mart. When the backroom machinations surrounding this case are uncovered, it will make Bush v. Gore look like quality legal scholarship.”

The Death of Title 7 Class Actions?

Many believe the Court used the Wal-Mart case to kill class actions based on race or sex discrimination. After all, it is rare in 2011 for a company to publish policies that promote discrimination; to the contrary, virtually every business has the type of public non-discrimination policy that the Alioto decision held insulates them from liability.

In a concurring opinion, Justice Thomas praised the majority’s willingness to reverse settled law, and suggested that the Court next take an opportunity to overturn the historic Brown v. Board of Education, as well as the series of cases in which the constitutionality of federal labor standards were upheld. And with Justice Thomas’ wife a Tea Party activist, the Court could also be taking aim at the Obama health care law.

Randy Shaw has been a member of the California Bar since 1982, and the Supreme Court has reversed nearly every prior constitutional law ruling since that time.