Supes : We Can Ignore Disability Concerns. 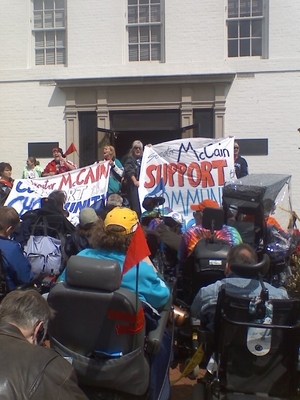 On Thursday, February 12 — a day many people recognize as special in civil rights history — the Rules Committee of the Board of Supervisors decided, with the passive acquiescence of their assigned legal counsel who spent much of the 3-1/2 hour meeting chatting on the side with five different staff , that they didn’t need to respond to or even acknowledge Measure D, passed by a 60-40 margin in June, 2008. The measure, among other provisions, made it city policy that membership of City boards and commissions reflect the interests and contributions of people with disabilities, and that City officers and agencies support the nomination, confirmation, or appointment of disabled candidates to fill seats on those bodies. When Rules Committee considered an appointment to the Elections Commission, however, neither the Supervisors nor the deputy city attorney ever bothered to utter the words “disabled” or “disability”.

Yet, in earlier items about the re-appointment of two members of the Health Commission, Rules Committee members asked lengthy, probing questions about the funding of programs and services for people living with HIV / AIDS. The Supervisors could ask about helping ONE category of people with a disability but somehow couldn’t be responsive to ALL people with disabilities.

Members of the Rules Committee also were able to easily ask about and prudently opine about the problems of ethnic and linguistic minorities.

How is it there’s such a barrier for Supervisors and the various deputy city attorneys to have this block regarding disability? The possibility of having great difficulty in expanding one’s civil rights horizons
isn’t just an hypothetical possibility.

This lengthy analysis about the Problems with the Rules Committee has a counterpart in similar neglect of disability concerns by the Elections Commission.

Actions, or inactions, by the SF Elections Commission, the SF City Attorney, and possibly even the Rules Committee of the SF Board of Supervisors may not be contributory towards setting an atmosphere for any progress in including and accommodating people with disabilities.

Let me explain. On 16 July, 2008, the Elections Commission considered a policy [ Item 6 b ] regarding elections technology and voting materials. The approved minutes for that meeting, though, show this as Item 7b.

“Discussion and possible action to adopt a policy that preference is given to the use of paper ballots for voting in all public elections in San Francisco, that DRE machines are not regarded as preferable or even
equally desirable except for voters who would prefer to use DRE for any reason, and that voters will not be ‘encouraged’ to use DRE machines rather than paper ballots, and that the Department of Elections shall ensure that all employee and pollworker training includes material that reinforces this policy. “

It’s also worth noting that the author of this item is the appointee of SF City Attorney, Dennis Herrera. And that the head of the Elections Commission in 2008 was and likely again may be the appointee of the Board of Supervisors. While each commissioner may be considered independent, the values, priorities, principles, and philosophy of the appointing officer certainly come into play when considering whom to appoint–and whom NOT to appoint.

This past week, the Rules Committee of the Board of Supervisors recommended re-appointment of their earlier appointee for another five-year term, even though during the public hearing this draft policy about election technology and last year’s Proposition D were referenced.

There has been criticism and testing and analysis that DRE machines are not reliable enough and can somehow be tampered with. If one accepts that as valid, then the policy the SF Elections Commission considered means it was considering moving towards a two-tier system–a “reliable” paper ballot system and then a DRE system not as reliable as paper ballots.

Thus, the draft SF Elections Commission policy cited above means some San Francisco voters would have been relegated to either an unreliable voting system or to a non-secret ballot.

This draft policy was continued to the call of the chair, but specifically for the 17 December, 2008 meeting. Without explanation, this item never showed up on that or on any subsequent agenda. Though no action was taken to adopt it, this item still could be put back on any agenda of the Elections Commission.

Further, it’s worth noting that the approved minutes does not indicate anyone–whether Elections Commissioner, deputy city attorney assigned as legal counsel to the Elections Commission, staff, nor advocate from the public –raised any question or made any comment about how such a policy would relegate the print-impaired to either losing the option for a secret ballot or to using a less-reliable voting system than those voters who can read print.

The point from this is that the absolute silence from all parties speaking at the 16 July and / or the 17 December Elections Commission meetings about disability aspects of a proposed policy does not then
allow for any claim that disability concerns, access, accommodations or civil rights implementation was taken into account.

Then, when the draft policy cited above was referenced at the 12 February meeting of the Rules Committee of the Board of Supervisors, the chair of that committee characterized the comments about the disability-inhibiting aspects of this draft policy as merely “a difference of opinion”. Throughout that 12 February Rules Committee hearing [ Item 25], none of the three Supervisors nor the deputy city
attorney assigned as legal counsel to the Supervisors made any comment about nor referred to any aspect of disability access.

They did allude, however, to an intent to re-appoint anyone appointed by the Supervisors to another term.

Here’s a verbatim excerpt from an e-mail sent by someone who saw the entirety of item 25, about the appointment by the Board of Supervisors of a member of the public to the Elections Commission :

“… it certainly did not seem like any sort of evaluation to me, i.e., the criteria seemed to be -he’s [[ the previous appointee]] got the job…and that’s that,…”

[[[ “Criteria” refers to the supposed evaluation of the two applicants for the one vacancy–the incumbent and an advocate who raised the problems with lack of disability access considerations. ]]]

Supervisors during the hearing made statements about past appointing practices and history about re-appointment requests that are contrary to fact. They basically said that if someone they appointed came back for re-appointment, they’d grant it. Apart from the illegality of the failure to consider the requirements of Prop. D and the problems of failure to consider what is stated in an application or at a public hearing, they were simply WRONG.

A very prominent example –widely mentioned in various media–occurred in 2005 when an Ethics Commissioner who had served an initially short term asked for re-appointment to a complete term. The Rules Committee rejected that person and instead appointed a progressive woman. [ A pre-cursor, of sorts, of 2008’s Prop. D factors? ]

The 2009 version of the Rules Committee just doesn’t know history and makes up a practice not based in reality.

Unfortunately, silence about disability aspects of SF Elections policy and actions has been the pattern in several meetings of different San Francisco government bodies.

The Elections Commission was and is willing to make decisions about policy, staff training, and instructions to the public that may materially and permanently affect the voting public who are
print-impaired, yet the Elections Commission does not make any mention of how such policies may affect people with disabilities.

Will the President of the Board or the City Attorney ask for a re-hearing, so the avoidance of Prop. D can be rectified and the problems of accessible elections technology be addressed?

Will the entire Board vote to send this back to the Rules Committee?

Or, will there be a passive approach–Let’s not comment or respond, so we can quietly avoid this and get away with a failure of process?

And, what sort of retribution will there be for such an “uppity” analysis and commentary?

Realistically, how much more can the Supervisors neglect us?

Editors Note: When BeyondChron originally published this story, some of the text was cut off. This is the story, in it’s entirety. We wish to apologize to our readers and to Mr. Bob Planthold. BeyondChron sincerely regrets the error.