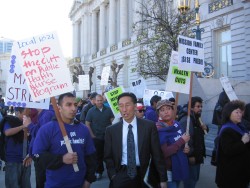 Facing over $8 million in imminent cuts in city funding, San Francisco public health organizations came before the Board of Supervisors yesterday afternoon to support one last reprieve: a proposal to replace the public health cuts with $8 million in city administrative and arts funding cuts.

But the Board sent the proposal to its Budget committee for further review, delaying any action and almost insuring that the cuts to public health funding will go through on February 20 as proposed by Mayor Gavin Newsom.

The cuts are some of the over $100 million in mid-year budget cuts that Newsom has proposed to close the city’s widening budget deficit which the city estimates could grow to around $575 million in next year’s budget. That figure represents as much as half of the city’s discretionary budget, meaning that steep cuts will be required across the board to balance the budget.

In reality, the supervisors could do little to restore the public health funding without the mayor’s assent, but Supervisor Chris Daly, the author of the alternative proposal, had hoped that by disappropriating a similar amount of funding from other areas, the board could convince the mayor to rescind the public health cuts.

An hour before the supervisors were set to debate the proposal, around 300 supporters of the public health agencies on the chopping block held a spirited rally on the steps of City Hall. The rally was organized by Service Employees International Union Local 1021, which represents jeopardized health care workers at San Francisco General Hospital and Laguna Honda Hospital. Other agencies facing funding cuts include tenants’ advocacy organizations, substance abuse treatment programs, homeless shelters, and the city’s own job placement programs.

“We can’t be cutting food stamps at the time people need food,” Laura Guzman of the Mission Resource Center announced through a megaphone. “Let’s go to city hall to change business.”

Then dozens of supporters—wearing matching purple “got public health?” T-shirts—streamed into the supervisors’ chamber to give some four hours of testimony in support of their work. Speakers gave stories of lives turned around and saved by the various organizations as well as emotional pleas not to cut funding from already strained social services.

“If it wasn’t for the collaborative, I’d probably still be hiding under my bed and not aware of my rights,” said Christopher Dotenhoff, an Elk Hotel resident who spoke in support of the Central City SRO Collaborative, which does outreach to tenants in the Tenderloin. “In a time when the economy is failing us, San Francisco should stand up for us, not knock us down.”

Eve Meyer, executive director of San Francisco Suicide Prevention, agreed that the cuts are ill-timed in such a bad economy.

“People are now calling because they’ve lost their jobs, lost their homes, they don’t know where to get food,” she told the board. “They are us.”

Though the vast majority of the speakers were from the public health organizations, several speakers came from arts organizations which faced cuts in the alternative plan before the board—including the San Francisco Ballet and San Francisco Symphony—to argue that they also perform public service.

After the lengthy testimony, the supervisors, who at times during the hearing seemed wearied by the volume of testimony, were split on whether or not to approve the alternative cuts and ask Newsom to rescind the public health cuts. Three supervisors—Bevan Dufty, Sean Elsbernd, and Carmen Chu—argued that the hastily assembled collection of administrative cuts could have detrimental affects on city operations without necessarily solving the problem of the public health cuts.

“You can have 7 votes, 8 votes, 11 votes—the mayor doesn’t have to spend the money,” said Dufty, noting that the board only has the power to appropriate or disappropriate money, not order the city to actually spend it. Elsbernd also argued that the board should have the cuts fully vetted by its budget committee.

But Supervisor John Avalos fired back, “A lot of analysis has come from everyday people about what affects the cuts in service will have…It’s devastating.” Supervisor Ross Mirkarimi, a member of the budget committee, additionally noted that the committee would likely not finish its analysis before February 20, when the cuts are scheduled to go into affect.

But in the end, discretion won the better part of valor and by a 6-5 vote, the board voted to send the issue to the budget committee. Supervisors Michela Alioto-Pier, David Chiu, Chu, Dufty, Elsbernd, Sophie Maxwell voted for the motion to the proposal to the committee; Avalos, David Campos, Daly, Eric Mar, and Mirkarimi voted against.

When asked why he voted to send the proposal to committee rather than take action at the meeting, Chiu, the board’s president, said that he thinks that the administrative cuts were not thoroughly vetted, and the $8.8 million in savings would not do much to resolve the problem – compared with possible revenue measures for a June special election.

Six hours after the board meeting began, the public health organization supporters left, their programs the first casualties in what promises to be an ugly year for city funding in San Francisco.