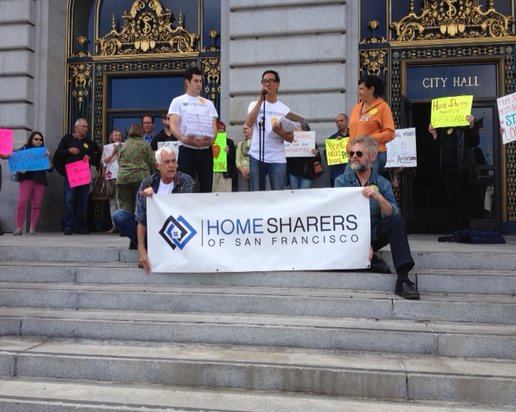 On September 29, the SF Board of Supervisors Land Use Committee passed legislation that will effectively replace thousands of permanent residents with higher paying tourists. The measure, sponsored by Supervisor David Chiu with backing from Airnbnb, Homeshare profiteers, and from tech, converts desperately needed rental housing for permanent residents into tourist lodgings. It also allows every single single-family home in every neighborhood to become a bed and breakfast simply by registering with the city.

Why is San Francisco on the verge of turning its scarce housing stock over to tourists? It’s all part of the “sharing economy,” a popular concept whose implementation in this context will sharply increase city housing prices.

The logic behind converting San Francisco’s entire housing stock is hard to fathom. It reduces rental housing opportunities for permanent tenants when those are desperately needed. The sharp increase in tourist rentals of apartments is an overlooked factor in the city’s skyrocketing rent increases in recent years.

So how has this legislation gotten close to passage? There’s a lot of money to be made in expanding the city’s hotel industry to private apartments and single family homes. Just consider that it is estimated that Airbnb’s share of annual hotel taxes is estimated at $11 million; we are talking about an industry with revenue reaching the billions.

With so much at stake, those in the self-proclaimed “Homeshare” community have packed hearings and lobbyed supervisors. In contrast, those evicted to create vacancies for tourist rentals, or those unable to obtain housing due to thousands of units taken off the market, are less identifiable victims.

It comes down to housing advocates defending the city’s rental housing stock against “hosts” whose professed $100,000 annual earnings from year round tourist rentals give them great incentive to wage an all-out fight.

David Chiu sees delivering for Airbnb and the host community as building his support base for his Assembly campaign. Chiu has steadfastly opposed efforts to ensure his new law is enforced, believing that he can get six votes for the measure exactly as he wants it.

For months, I’ve been pounding the need for viable enforcement of this massive conversion of rental housing to tourist use. Yet Sponsor Chiu consistently refuses to add a provision that has worked effectively to stop SRO conversions since 1990.

The only reason anyone would oppose such a measure is that if they don’t want the law enforced. And in its current form, people will be able to freely rent out units to tourists regardless of whether they even live in the unit, or live there for the required 90 days.

Simply put, enforcement is left to the same Planning Department that has failed to enforce the existing law. Let that fact sink in for a moment. After Planning currently has a 1200 complaint backlog for illegal tourist rentals, Chiu and his allies want to vest all enforcement in an agency that has already proved it lacks the staff to handle the job.

The Supervisors have the option of relying on private enforcement, which is how the Rent Ordinance and Hotel Conversion Ordinance are enforced. But Chiu has thus far refused to follow what has worked in similar laws.

And while the definition of insanity is expecting a different result from the same course of action, Chiu knows exactly what he is doing here. His backers want no restrictions on any tourist use, which means no enforcement.

I would think Airbnb would want to create an industry that is effectively policed. But if they did, we would not have a piece of legislation heading to the Board that is completely unenforceable.

The city needs to build more housing, not actively reduce our current supply.  Yet some groups at the front of the pack in arguing the virtues of building more housing have been strangely silent on this Airbnb legislation.

Is it possible that housing development advocates don’t realize that tourist rentals reduce the city’s permanent housing supply? And that Airbnb hosts will take more rent-controlled housing opportunities off the market than the city will build next year?

Its called putting ones head in the sand. Or perhaps these tourist rentals will strengthen the argument for new housing development, as the loss of these units makes the need to build more even greater.

Can San Francisco benefit from more affordable tourist rentals? Sure. But that’s very different from allowing every occupied housing unit in the city to rent rooms to tourist 365 days a year!

Its usually better to win 80% of what you want by a 9-2 vote than get 100% and win 6-5; the latter outcome ensures a future ballot measure that is far stricter than anything currently on the table.