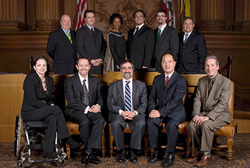 Frustrated that his colleagues would not second his motion to amend the budget before final approval, Supervisor Chris Daly announced at yesterday’s Board meeting that he would vote “no” and walk out. Within an hour, a pro-business lobbying group had uploaded the video on their website – proving once again that Downtown will use him as their favorite whipping boy. But Daly’s last-minute proposals had not been vetted through a public hearing and had already caused enough political damage, which is why even his most progressive colleagues did not go along.

When the Board later considered a Housing Charter Amendment for the November ballot, Bevan Dufty argued that passage was slim – and that Daly had done more to re-elect Gavin Newsom in the past six weeks than anyone else. The Board voted to approve three Charter Amendments and continued two others, but postponed the Housing Amendment until February – so that it won’t be another proxy fight for the Mayor’s race.

There’s a lot to be upset about the way this year’s budget played out, and how the final document – which should have included $33 million in new affordable housing funds – ended with $8.4 million. The Board made some last-minute changes yesterday to save public health nurses and a homeless drop-in center on 13th Street, but had to cut money out of affordable housing to make that happen. At such a late stage in the game, the Supervisors could do nothing but tinker around the edges.

Progressives went from passing a historic appropriation for affordable housing in May by a veto-proof majority, only to have Newsom refuse to spend the money. But Daly’s reaction – to re-insert the housing money by altering the Mayor’s budget – backfired when it galvanized constituencies around the Newsom re-election team, angry at the Supervisor’s “cuts.” Board President Aaron Peskin then removed Daly from the Budget Committee and steered what he called a “drama-free” process.

But Daly had plenty to criticize about the process – and the product – last night. “I did not come to the Board of Supervisors to make my colleagues comfortable,” he said – as he quoted the late Mission activist Victor Miller, whose New Mission News vowed to comfort the afflicted and afflict the comfortable. “I was chastised, lambasted and ultimately removed from the Committee apparently because I wasn’t supposed to do that. Aaron Peskin ducked for cover from the possibly illegal bullying by the Mayor’s campaign.”

Peskin felt compelled to respond. “When you run a municipal corporation,” he said, “there are an unlimited number of needs and a limited number of resources. The budget is a set of trade-offs. I agree with Chris Daly that the Budget that was handed to us had a number of draconian cuts that should not have been proposed. But we restored them. We cut the fat – like the Police Department – where it was needed. We got the best budget we could do.”

The Budget Committee under Peskin’s leadership did cut the fat, in a way that was less confrontational with the Mayor. Peskin even convinced the Police Department to cut more out of its budget than Daly’s amendments would have done. But it also essentially split the difference – leaving far less money in affordable housing funds than what progressives had fought for, and restoring most (but not all) of the Mayor’s public health cuts.

Last night, the Board struggled with restoring several cuts in the final budget – Buster’s Place, the City’s only 24-hour drop-in center for the homeless; senior services that deal with eviction defense and pedestrian safety improvements; public health nurse positions that were being eliminated; and keeping the 14 psychiatric beds at San Francisco General Hospital open. In the end, all but the last were restored – to the tune of $1.62 million, taken out of affordable family rental housing.

This year’s budget was a painful process that progressives are eager to put behind them. At this point, constituencies have to deal with the budget results as they are – and figure out a way to fight for their priorities in the coming year that does not squander their precious political capital. Tactical decisions need to be made that are bold and ambitious to get the best results, because after all – politicians come and go, while the rest of us struggle to continue living in this City.

The Board also voted to place three Charter Amendments on the ballot – (a) various changes with the Police Retirement System, (b) a renewal of the City’s Library Fund set-aside passed, with Daly and Ed Jew dissenting, and (c) Question Time – which would require that the Mayor attend a monthly Board meeting to answer questions.

Voters had passed Question Time last year as a non-binding policy, but the Mayor has refused to attend, instead hosting a series of “Town Hall” lectures that have made a mockery of the voters’ intent. The Question Time Charter Amendment passed 6-5, with Supervisors Sean Elsbernd, Bevan Dufty, Sophie Maxwell, Ed Jew and Michela Alioto-Pier opposing.

The Board voted to continue both Aaron Peskin and Jake McGoldrick’s competing Charter Amendments on Muni Reform. Peskin said that he wants to make some changes after having consulted with labor.

Finally, the Board voted 4-7 against placing Chris Daly’s Housing Charter Amendment on the November ballot – which would allocate 2.5 cents out of every $100 in property tax revenue towards affordable housing. During public comment, various housing activists argued that while it is good public policy, it would be better to wait until February when chances of passage are better.

The fact that affordable housing activists would ask the Board to delay placing the Charter Amendment was noteworthy. These are groups who have a constituency that will outlive any political careers. What they ultimately want is to see the policy pass, that we have money for affordable housing. But there was a palpable fear that another fight between Chris Daly and Newsom over housing funds in a year when the Mayor is up for re-election did not bode well – and could set back the progressive fight even further.

Which showed an intent – and hope – to move beyond this year’s budget process.