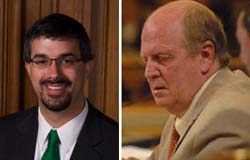 Yesterday’s Board of Supervisors Charter Amendment meeting made it very clear that election season is in full swing, as the Supervisors battled over which charter amendments would make it onto the November ballot. Getting the 6 votes necessary to submit a charter amendment to the ballot proved easy for amendments not tied to the budget, while any amendment concerned with the city’s finances caused considerable debate. Supervisor Jake McGoldrick, who serves as the Chair of the Budget and Finance Committee, was particularly defensive about any amendment he had sponsored concerning the budget. The most controversial amendment on the agenda, the McGoldrick sponsored privatization of hospital security guards at SF General and other public health clinics, was defeated by a 7 to 4 vote. This hot button issue was extremely important to labor rights organizations such as the SEIU, not only because security guard jobs were on the line but also because it represented a rising trend in the privatization of city labor.

The proposed privatization, under the heading of Proposition J, sparked a lively debate between those Supervisors for it (McGoldrick) and those against it (mainly Chris Daly). McGoldrick repeatedly emphasized the $5 million budget deficit he believed would be created if the hospital security guards were not privatized, which, he stated, would translate into a $8 million deficit in next year’s budget. Those opposed to the privatization cited that maintaining the hospital’s security was their concern first and foremost, while Daly stated his opposition to the growing trend of privatization in general. Obviously frustrated with the lack of support, McGoldrick made a personal jab, stating that “Supervisor Daly perennially votes ‘no’ on the budget” to which Daly countered, “for the record I have voted for the budget more than I have voted against it.” This banter continued for a while until McGoldrick closed by stating that the lack of support on this issue, and of his budget proposals in general, was “one of the deepest disappointments in my eight years on the Board of Supervisors.”

The defeat of Prop J was nearly prolonged until next week, as McGoldrick’s request for a continuance was narrowly voted down 6 to 5. Its defeat yesterday was a welcomed reprieve from the stress and anxiety that had been felt by labor rights advocates, the SEIU, the unionized security guards and hospital workers alike across the city. Robert Haaland, San Francisco’s SEIU political coordinator, who spoke on behalf of SEIU Local 1021, expressed his relief that this issue has been put to rest. “We are incredibly grateful to the members of the board who voted ‘no’ on Prop J,” stated Haaland who was still recovering from the tense and contentious debate that led up to the final vote.

Other charter amendments that did make it to the ballot included an amendment to increase the number of signatures required to qualify a petition to recall local officials, an amendment that would prohibit city employees from serving as members of Charter boards and commissions, and a amendment to create a water rate payer advocate position that would be paid for by the Public Utilities Commission. This last amendment concerning the rate payer advocate created somewhat of a stir as Daly voiced his opposition to it, stating that the creation of this position would result in there being “5 layers of bureaucracy” that water rate decisions would have to go through, “making water rates the most bureaucratic process in the city.” Despite Daly’s efforts, the amendment was passed with a vote of 8 to 3. A ballot measure submitted by Mayor Newsom to re-structure the Transportation Authority, which would take power away from the Board of Supervisors to manage transportation funds, was quickly tabled.

Many of the other Charter Amendments were granted a continuance until next week, proving that the final list of amendments for the November ballot is far from finalized.