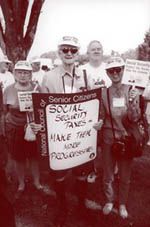 The San Francisco Board of Supervisors voted yesterday, urging the Social Security Agency to keep the doors open at the Western Addition branch office instead of consolidating three of the city’s branches into a single big central office downtown.

Authored by Supervisor Ross Mirkarimi, the resolution does not have much in legal authority, which means, despite the supervisor’s best intentions, it’s unlikely the agency will be compelled to change it’s mind soon. “As these resolutions go they are perceived as toothless. You can only urge, or request, or beg,” Mirkarimi said.

What many in the community, including the supervisor, are begging for is the quality of life of approximately 5,000 seniors, who visit the Western Addition branch everyday. The office is actually within walking distance to five separate senior homes.
“It’s not a well known decision and it will unduly impact that community especially in an area where there are five senior centers that abut the building,” said Mirkarimi.

But according to office manager Bob Andrews, the agency decided two years ago that the understaffed office couldn’t handle the workload and letters were sent out to residents.
“The reason for consolidation is to provide better service for the public. We don’t have the staff we need to perform the service we’d like to perform and the need for someone to come to our office isn’t as great as it used to be,” said Andrews.

That has been the agency’s line since the beginning. Every official Beyondchron spoke with has maintained that in this modern technological era the phone and Internet have made the branch office model of customer service obsolete.

In 2001 Congresswoman Barbara Lee was able to team up with State Senator Don Perata to halt the closing and consolidation of East Oakland’s branch office. But officials expressed doubt that there would be a similar result so late in this current process.
The new office on 7th Street and Mission Street is scheduled to open its doors in June.