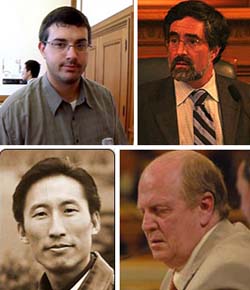 Heads are still buzzing as to why three San Francisco Supervisors, one School Board member and five November candidates for Supervisor all filed papers on Friday – to run for the Democratic County Central Committee (DCCC). Criticized by some as a heavy-handed tactic, Supervisors Chris Daly and Aaron Peskin said that it’s about raising the profile of an obscure political body – and making the Democratic Party more relevant, more vocal and more progressive. For the first time in years, progressives will run a full slate in June for the body’s 24 elected seats – and while the focus is on the “big names” who are running, a good number of West Side activists were also recruited. On the East Side, Daly and Peskin’s presence on the ballot all but guarantees that some incumbents – perhaps a few progressives – will lose, but some DCCC members believe that it’s worth the risk.

The DCCC represents all registered Democrats in San Francisco, and is the official voice of the local Democratic Party. Members of Congress and the state legislature from San Francisco have a seat on the committee (as “super-delegates”), but the other 24 members are elected in June – with 12 from each State Assembly District. The Committee’s task is to build the Party though voter registration and fundraising efforts, and it publishes a very influential slate card at every election – with its official endorsements in local races.

As a friend of mine once put it, “the DCCC might just be the most expensive office to run for that you’ve never heard of.” Running for the San Francisco DCCC is as cut-throat as running for City Council in other places, and candidates wage fierce campaigns to win.

I have to admit that I wasn’t thrilled to first hear that 3 Supervisors – Jake McGoldrick, Aaron Peskin and Chris Daly – were running, along with School Board member Eric Mar (who’s running for Supervisor in November) and supervisorial candidates Eric Quesada, Emily Drennen, David Campos and David Chiu (the latter two are incumbents on the DCCC.) I’ve long felt that progressives should run a slate of DCCC candidates to present a united front, but that it should be a means of recruiting and training new leadership.

But Daly argued that running a slate with big-name candidates who voters are familiar with will help elect more progressives to the DCCC. “We’re trying to marry grassroots, people-powered politics with the more standard endorsement process,” he said, “because that’s how you win these low-level races that don’t get much attention. Someone like McGoldrick and Peskin on the slate will bring more progressive activists over the line.”

Peskin said it’s about revitalizing the DCCC and making the SF Democratic Party more meaningful. “My desire is to make the DCCC more representative of progressive San Francisco,” said Peskin, “and the #1 goal for the party must to drive up turnout. The DCCC can be a force for pushing issues like affordable housing and health care. In my eight years as a San Francisco Supervisor, I can count on two hands the number of times that the DCCC sent us resolutions like that. We can help change that.”

In March 2000, a group of reform-minded progressives – including Peskin, Eric Mar and Gerardo Sandoval – were elected to the DCCC after riding the wave of Tom Ammiano’s historic run for Mayor. By gaining a few seats, they managed to pull a truce – resulting in the Democratic Party not endorsing candidates for Supervisor that year. Because the DCCC endorsement had been used as a conduit for Willie Brown machine candidates in the past, this neutrality agreement paved the way for Peskin and others to get elected that year and change the make-up of the Board of Supervisors.

“We kept the Democratic Party out,” said Peskin, “and in 2000 they did not endorse candidates in district elections. When you end up in local races and the party is used as a weapon with Democrats running against Democrats, it turns people off. I want to take the DCCC in a better direction to focus on registering voters and pushing progressive turnout in San Francisco. Ultimately, that’s more productive.”

At various endorsement meetings this weekend, Daly pushed a “Hope Slate” supported by progressive leaders – urging activists to get behind a core group of candidates. On the East Side, the slate is incumbents Bill Barnes, David Campos, David Chiu, Michael Goldstein, Robert Haaland, Joe Julian, Rafael Mandelman and Laura Spanjian – along with Daly, Peskin, Eric Quesada and Debra Walker. On the West Side, the slate is incumbents Jane Morrison, Connie O’Connor and Arlo Hale Smith – along with Michael Bornstein, Emily Drennen, Hene Kelly, Giselle Quesada, Eric Mar and Jake McGoldrick.

Not all these candidates are established political figures who’ve been elected to higher office. Despite the apparent “top-down” nature of who’s running based on familiar names, the most encouraging aspect for progressives is the grassroots leaders who are running on the West Side: ACORN member Giselle Quesada, Sierra Club activist Michael Bornstein and education advocate Hene Kelly. Progressives have long had a majority of DCCC seats on the East Side, but a strong West Side slate is unprecedented.

In fact, the real danger I see on the East Side about having Daly and Peskin running is that they might knock out a few progressive incumbents. Eleven of the 12 East Side incumbents are running, and moderate ex-Supervisor Leslie Katz has historically been one of the top vote getters. Therefore, she’s not likely to lose her seat with Peskin and Daly running in the field. But the East Side candidates who came in 11th and 12th place two years ago (and thus barely eked through) were both progressives.

Despite that concern, progressive incumbents who are running said that the prospect of having Peskin and Daly on the DCCC is worth that risk. “I obviously will work hard and hope that I get re-elected,” said Robert Haaland, “but having them on the DCCC is more important than my winning.” Rafael Mandelman, who came in 11th last time, said that the Supervisors would bring excitement to the DCCC that is lacking. “It would be worth it,” he said, “even if I were to lose. Any one of us is expendable.”