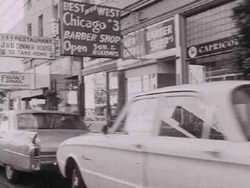 The San Francisco Board of Supervisors Land Use Committee is expected to approve legislation on August 11 that gives descendants of those displaced by the Redevelopment Agency from the Western Addition and Bayview priority in obtaining affordable housing. Sponsored by Supervisor Ross Mirkarimi and backed by Mayor Newsom and a Board majority, the measure is a precedent-setting and powerful strategy to stem the steadily declining number of African-Americans in San Francisco. Although the legislation gives priority to all displacees granted housing certificates by the Agency who were then unable to stay in San Francisco, the overwhelming number were African-American. This legislation comes on the heels of two other positive reforms to the city’s inclusionary housing law, showing that city political leaders remain committed toward addressing our affordable housing crisis.

When San Francisco’s Redevelopment Agency demolished the city’s largest and most successful African-American community in the 1960’s, it gave victims housing certificates for them to obtain homes elsewhere in the city. Predictably, many certificates either could not be used, or, for economic reasons, were not used, so that most of those displaced by the city’s “Negro Removal” strategy received nothing for their troubles.

Since that time, San Francisco’s African-American population has steadily declined, a trend with no sign of reversal. And those most likely to leave are families earning $50,000 or more, as they pursue affordable housing options outside expensive San Francisco.

Since San Francisco’s affordable housing programs operate via lottery, whether one’s family was indirectly displaced by government or private action is irrelevant toward qualifying for such units. As a result, neither nonprofit housing construction nor and the creation of below-market inclusionary housing has stemmed the African-American exodus.

But that could soon change.

As a result of proposals conceived by Julian Davis and others at the San Francisco Housing Development Corporation (SFHDC), a “Housing Reparations” measure has emerged creating housing preferences for the children and grandchildren of people displaced from the Fillmore and Bayview by the Redevelopment Agency. The historic aspect of this measure is that it extends preferences to the descendants of those displaced, whereas other laws already give priority to those actually displaced.

While the legislation is race-neutral, the beneficiaries—whose families were the victims of government action—are overwhelmingly African-American. And because priority would be extended to both nonprofit affordable projects and for-profit inclusionary units, the impact in increasing, or at least maintaining, the city’s black population could be significant.

Last week, Mayor Newsom gave his support to this historic legislation. This means that after its expected passage by the Land Use committee today, it is almost certain to pass the full Board and become law.

What some believe began as a pipe dream, will soon create a national precedent for redressing the injuries of the African-American families who were the primary targets for Redevelopment Agency displacement across the nation.

Last week, in a surprising 7-4 vote, the Board of Supervisors improved the city’s inclusionary law by allowing 25% of offsite affordable units to be built more than a mile from the market-rate housing. Sponsored by Supervisor Gerardo Sandoval, the main impact of the measure will be to increase the number of affordable units built in the Excelsior and Outer Mission, and throughout District 11.

Supervisor Sophie Maxwell sponsored the one-mile rule in order to stop SOMA developers from pushing their affordable units to Bayview-Hunters Point, over a mile away. But the difficulty acquiring sites for affordable housing made this per se prohibition infeasible, and prevented the building of family units in places—such as all of District 11—where they were desired.

Maxwell argued at the Land Use committee hearing that her law had not had enough time to work, a position that Supervisor Aaron Peskin appeared to espouse. The Mayor’s Office of Housing joined these Supervisors in opposing the legislation.

But at the full Board, Supervisors Chris Daly and Ross Mirkarimi joined with Supervisors Sean Elsbernd and Carmen Chu (as well as with Dufty and I believe McGoldrick) in an unlikely left-right alliance that brought a 7-4 victory. The fact that Newsom’s two closest Board allies favored the legislation likely reduces the chances of a mayoral veto.

Last week also saw one of the bitterest public hearings ever held on the city’s inclusionary law. It involved legislation sponsored by the Mayor and Supervisor Jake McGoldrick to bring affordable units purchased under the 1988 condo conversion law under the city’s current requirements for such below market units.

The measure impacts 550 units, many in Diamond Heights. And if you ever wanted to see a group of angry and aggrieved homeowners, watch the video.

The crowd did not approach the tenor of the famous “landlord riot” that occurred in opposition to owner move-in legislation in the late 1990’s—orchestrated by Sunset District activist Julie Lee, who now faces years in prison—but extreme venom was expressed toward the Mayor’s Office of Housing for proposing to improve the city’s ability to enforce resale affordability provisions that many of the owners agreed to in writing.

The hearing reminded me of my long years battling SRO owners who sought to disavow documents they signed in 1979 and submitted to the city stating how many rooms in their hotel were being rented to tourists and how many for permanent residents. Judges, political appointees and the media were willing to seriously consider such a frivolous argument, though we ultimately prevailed.

Here, when Peskin pointed out that many signed an affidavit saying affordability restrictions were “permanent,” owners responded that they had been verbally told it was only 20 years—one argued that he thought that “permanent” meant that it would be “permanent” for only this two decade period.

Ponder that reasoning for a moment.

How this turns out is nobody’s guess. But with the passage of the two other measures noted above, the Supervisors deserve credit for continuing to make progress in addressing our affordable housing crisis.