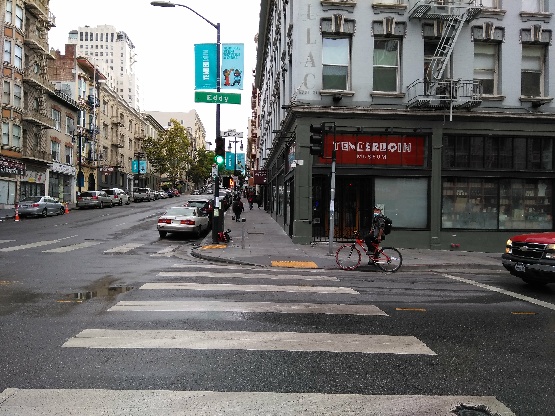 Cleared sidewalks at Leavenworth and Eddy

Board Seeks More Information on Lawsuit

After pulling the Hastings College of the Law vs. CCSF lawsuit from the consent calendar the San Francisco Board of Supervisors continued the item for a week. Many Board members had questions about the case that could have been answered by the City Attorney’s office in Executive Session; a process that will occur next week.

Although the settlement was made public on June 12, some supervisors seemed not to understand its basic elements. For example, Supervisor Aaron Peskin noted that tents had been reduced and concluded that instead of settling the suit it should be dismissed. Yet if the city sued a landlord for converting housing to office use, and in response the landlord stopped said illegal use, Peskin would demand that a binding agreement be reached to prevent the illegality from returning. Why he sees the lawsuit by Tenderloin stakeholders differently is a mystery.

The deputy City Attorney who negotiated the settlement was not present. In their place was a deputy who seemed entirely unfamiliar with the case. She was of no assistance in answering basic questions about the case.

Nor was the mayor’s office present to answer questions. This rankled a Board already upset with the mayor over not expanding hotel placements for the unhoused. The Tenderloin settlement highlighted the acute lack of communication between the Mayor’s Office and Board of Supervisors.

Supervisors raised concern that settling this case would spawn “copycat lawsuits” from other neighborhoods. But that is an argument for settlement. A settlement has no prejudicial value while a federal court injunction—which I believe will be issued if the settlement is rejected—does.

Supervisors Ronen and Preston noted that it shouldn’t have taken a lawsuit for the city to have intervened in the Tenderloin. But that’s what happened. The best way to prevent “copycat lawsuits” from other neighborhoods is to for the city to ensure social distancing mandates are met citywide.

Hastings and its fellow plaintiffs waived all attorneys fees and costs under the settlement; they will get both if the court issues an injunction.

Again, many Board members are not attorneys. They deserve to have the facts and legal issues underlying the city’s decision to settle explained to them by the city attorney’s office or the mayor’s office. When they get their questions answered next week I believe the Board will agree the settlement  in the city’s best interest.

The landmark lawsuit was filed on May 4 in response to over 420 tents blocking sidewalks in the Tenderloin. The attorneys reached a settlement on June 12 but its finality awaits Board approval.

Under the agreement 70% of the 420 Tenderloin tents were to be removed by July 20 with the balance  soon after. Yesterday’s tent count was 47!

In addition to D6 Supervisor Matt Haney, whose vocal support for moving tent dwellers into hotels and supervised sites never wavered, many deserve credit for this dramatic improvement in Tenderloin living conditions. Special thanks is due Hastings Dean David Faigman, its CFO David Seward and Executive Director of Operations Rhiannon Bailard for recruiting top attorneys to file a lawsuit to protect Tenderloin residents and workers during COVID-19 and beyond.

Prior to the lawsuit the city flagrantly violated local and federal COVID 19 health mandates. Tent dwellers blocked sidewalks, often making it unavoidable for residents trying to reach or leave their homes to secure six feet of social distancing. Longtime neighborhood observers had never seen the Tenderloin fall into such a deep crisis; the lawsuit filed by Hastings College of the Law and local residents and business people was a last ditch effort to protect the neighborhood’s present and future.

The lawsuit sought to shift tent dwellers to either hotels or supervised sleeping sites. It worked. Contrary to naysayers who claim people on the streets “don’t want housing,” the overwhelming number of tent dwellers gratefully accepted the city’s offers.

The lawsuit “saved” the Tenderloin. Until it was filed the community was on track to be permanently transformed into a “containment zone” for illegal activities and homeless services.

I warned about the city moving in that direction in a February 23, 2020 SF Chronicle article. (“After 40 Years, the Tenderloin at another Crossroads”). The Tenderloin was primed for a transformative year in 2020 so long as misguided city policies did not block its progress.

Misguided city policies allowed nearly 200 tents to block Tenderloin sidewalks before the pandemic.  The pandemic then made clogged sidewalks a fact of life throughout the neighborhood, despite this posing a major health risk to Tenderloin residents and workers.

Now, thanks to the lawsuit, the city has officially recognized that Tenderloin sidewalks should not include tents. The neighborhood can now deal with its two big remaining problems: sidewalk drug dealing and restaurants, bars and entertainment/cultural venues closed by the pandemic.

The two are connected.

In the Tenderloin, the connection between legitimate ground floor businesses/social service activities and safe sidewalks could not be clearer. Longtime drug dealing sites—the Local 87 owned parking lot at Turk and Hyde, the long vacant former post office at 101 Hyde, the long vacant parking lot (now apartments) at Golden Gate and Jones—all fit this profile. As do sites at Golden Gate and Larkin whose lack of legitimate evening activity invites illegal dealing.

This also explains why the long vacant city-owned 440 Turk building became the neighborhood’s drug dealing hub. And why drug activity left once the building was occupied in January 2020.

I listed the Tenderloin’s positive developments set for 2020 at year’s start, “A Tenderloin Breakthrough in 2020?” Unfortunately, I did not anticipate that our president would allow a pandemic to destroy the nation’s economy from March 2020 to at least year’s end.

What does this specifically mean for the Tenderloin? It means that La Cocina’s public marketplace at 101 Hyde cannot open as planned on September 1 but will be shuttered for at least the rest of the year. It means that the Hibernia Bank will not be filled evening after evening with events that deter drug dealers but will instead remain vacant. It means that the Shorenstein building at 1066 Market, which I saw as the single most positive impact on that area, has delayed its opening while it seeks more tenants.

Phil Matier recently cited a Chamber of Commerce analysis that found “51.5% of the city’s restaurants were closed, as were 77% of bars and nightclubs. Only 18% of the city’s retail or apparel businesses were open.” And those restaurants and bars that were “open” were not open for their primary business, which is indoor dining and drinking.

In affluent neighborhoods, closed retail does not promote illegal drug dealing. In the Tenderloin, it always has and still does.

That’s the challenge. Here’s what Tenderloin activists are doing to meet it.

UC Hastings, the hero of the Tenderloin lawsuit, has contracted with Urban Alchemy to address intensive drug dealing on the 300 block of Golden Gate, and the block bounded by Hyde and McAllister. Hastings has also led efforts to turn the 300 block into a shared space outdoor dining site for the street’s restaurants.

Rene Colorado, the tireless activist and Executive Director of the Tenderloin Merchants and Property Owners Association has led efforts to create outdoor dining in Little Saigon. All of these street sharing plans have taken far too long under San Francisco’s bureaucracy but this Little Saigon should be open for expanded outdoor dining soon.

Pratibha Tekkey, Director of the Central City SRO Collaborative, has worked tirelessly to activate the Turk-Hyde mini-park so as to deter drug activities on that corner. She has also pushed for a “Barklet” in the alley between Macaulay Park and the Hartland Hotel on Larkin. Such a use is desperately needed in the dog heavy Tenderloin. The Barklet will also prevent drug dealing in that alley, a longtime problem.

Jones Street is already being closed off for resident use. Other housing developments are moving forward.

Will these steps be enough for the Tenderloin to meet the promise it had at year’s start? No. The Tenderloin, like neighborhoods across the nation whose restaurants, bars and entertainment and cultural venues are closed, will struggle until these establishments can fully reopen.

The lawsuit has dramatically improved the Tenderloin’s quality of life. But nobody in the Tenderloin is claiming victory, and much work remains.

Want to learn the full story of the Tenderloin? Read Randy Shaw’s The Tenderloin: Sex, Crime and Resistance in the Heart of San Francisco.