Supervisors and Mayor’s Office Weigh in on People’s Budget 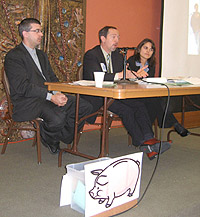 Four of the five supervisors on the Budget and Finance Committee (Ammiano, Daly, Dufty and Mirkarimi) as well as the Mayor’s budget director (Nani Coloretti) were the guests of honor at yesterday’s monthly Senior Action Network (SAN) meeting at St. Mary’s Cathedral. They were present to weigh in on the Aging and Disability community’s section of the 2007 Peoples Budget. Because of the Brown Act, no more than 2 Supervisors could be in attendance at one time so their appearances had to be staggered — two at a time. The four supervisors and Ms. Coloretti took questions from the community and had the chance to show their support for the specific items in the Peoples Budget by placing grossly oversized dollar bills (adorned with the famous SAN member Juanita Negrete’s photo) into a large “People’s Piggy Bank” if they were in favor of the proposals.

Meg Cooch, Executive Director for Planning for Elders emceed the event. The yellow hard hat wearing Healthcare Action Team (HAT) singers opened the session with a rousing, harmonica accompanied sing-along version of “Its People’s Budget Time” (to the tune of “You are my Sunshine”) and the crowd went wild. A photo slide show of community members displayed images of people with disabilities and seniors in the background.

The Aging and Disability Community proposals are divided into 6 sections: Housing and Eviction Prevention, Homecare and Healthcare, Healthy and Safe Living, Immigrant Services and Language Access, Transportation, and Other. An additional proposal that is not specific to the Aging and Disability Community, but is a part of the overall Peoples Budget Collaborative recommendations is a Cost of Doing Business Increase of 6% for all nonprofit service provider contractors who are funded by the City.

Some of the proposals we included in the People’s Budget are: a housing modification fund that would help making rental units ADA compliant, a shallow rental subsidy to cover rent increases for low income renters, an eviction prevention proposal for compulsive hoarders and clutterers that would provide training and outreach to this high risk community and their providers. Increased access to homecare, healthcare and home nursing care is included.

Additional LGBT support in the form of activity groups, service connection, and case management for the senior and disabled LGBT community as well as LGBT Cultural Competency Training would be funded. Also home delivered meals would be increased; immigration services to assist immigrants, and language access would increase for them as well.

Furthermore the proposals support expansion of transportation in several ways that include boosting up the taxi scrip program, providing for more personal escorts to medical appointments and improved training for Paratransit workers. A drop in center for seniors and people with disabilities in the Tenderloin would be established and a Peer Support Summit for consumers and their allies would be organized and funded.

All supervisors present openly supported each and every one of the budget proposals presented, and placed their money in the bank to show this. The Mayor’s budget representative was not able to place anything in the bank because she is required to submit a balanced budget and the amount of available money is not known until after the budget has been balanced. There is a general fund surplus this year in the amount of 127 million dollars, but Mayor Newsom maintains that this money is already earmarked for balancing the following year’s budget.

Chris Daly called the Mayor’s budget office to task on the matter of the surplus by claiming that they are using an overly cautious, extremely conservative election-year tactic that seems to be coming from the Karl Rove playbook. He accused the Mayor of using fear tactics to avoid funding communities in need and brought the crowd to a near standing ovation by saying that finding money to house homeless seniors and people with disabilities is simply a matter of political will.

Daly’s office has introduced a $28 million dollar supplemental budget for affordable housing that will be heard at the Budget and Finance Committee on April 18th. Supervisor Dufty said that he supports Daly’s efforts to put more money from the general fund into affordable housing in the absence of a new housing bond that is able to gather the 2/3 voter majority needed to pass.

Elizabeth Grisby asked how Mayor Newsom is going to monitor the budget so that people with disabilities are able to stay out of nursing homes like Laguna Honda. Ms. Coloretti responded that last year the Mayor supported the Community Living Fund that is aimed at preventing institutionalization and that there it currently has 3 million dollars available.

Supervisor Ammiano said that he supports all the recommendations and stated they should have been passed yesterday. He stated that he has always been an ally of seniors and people with disabilities. Likewise, Supervisor Mirkarimi (who arrived very late because of what he described as a “Muni meltdown”) enthusiastically supported People’s Budget.

At the end of the session the score was rather imbalanced with every supervisor supporting every proposal and the Mayors budget representative not overtly supporting anything – although she agreed that the mayor agreed with the principles. Despite the non-committal nature of the Mayor’s position and the contentious nature of the relationship between the Mayor’s office and the Supervisors on budget matters, everyone appeared to have a good time.

How good of a time people with disabilities and seniors will have in the upcoming year remains to be seen, but one thing is certain — the budget session is well underway.