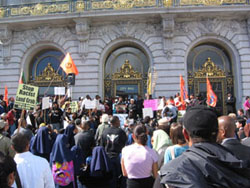 The Committee to Defend Bayview Hunters Point has filed a writ of mandate in San Francisco Superior Court challenging City Attorney Dennis Herrera’s legal opinion invalidating the Bayview-Hunters Point Redevelopment referendum. Over 33,000 San Francisco voters signed referendum petitions, which would have stopped Bayview Redevelopment in its tracks until approved by the electorate. But Herrera ruled that the petitions failed to include all of the documents “incorporated by reference” into the Ordinance, a burden that Petitioner believes was unnecessary and that would have rendered the circulating of petitions unfeasible. The lawsuit follows media reports of San Francisco’s disproportionately high arrest rate for African-Americans, and adds to the larger questions about the city’s approach to Bayview-Hunters Point residents over the past two decades.

Only days before the filing deadline, the Committee to Defend Bayview Hunters Point has sued the City and County of San Francisco over its rejection of a referendum on Bayview-Hunters Point Redevelopment.

The suit will likely have the immediate effect of delaying the San Francisco Redevelopment Agency’s moving forward on its Plan for the Area. The Agency may also decide to postpone issuing bonds for the Area until the case is resolved, as purchasing bonds would prove risky for investors should the referendum be reinstated and the Plan rejected by voters.

Once again, Brian O’Flynn has thrown the long-suffering Bayview-Hunters Point opponents of Redevelopment a rescue-line. O’ Flynn was a major force behind the petition drive, and has now picked up the cost of retaining Michael Grob, the former President and Chief Executive Officer of the Pacific Legal Foundation, to represent the Committee in the action.

Although many progressive legal organizations investigated representing the Committee, only a property-rights conservative stepped up to the plate and got the job done. In some respects, this mirrors the larger fight over Bayview, in which many progressive groups talked about their opposition to Redevelopment, but did little if anything to either defeat the Plan at the Board of Supervisors or help collect significant number of signatures for the referendum.

This progressive inaction provides a context for the December 17 San Francisco Chronicle story about the high level of African-American arrests in the city. Civic leaders are “outraged” by the fact that blacks comprise 7.8% of the city’s population but over 50% of the arrests, yet this situation is little different than in 1986, when the black population was 12.7% and their arrests were 49.9%.

If San Francisco residents and elected officials have allowed blacks to be arrested in record numbers for two decades, then transferring control of the last remaining African-American community to an unaccountable Redevelopment Agency makes perfect sense.

Since the Board of Supervisors approved the Bayview-Hunters Point Redevelopment Area last May, residents have been excluded from input into the community’s future. Reading news stories, one would think that the entire neighborhood is owned and controlled by the San Francisco 49ers, Forest City Development, and the Lennar Corporation.

The San Francisco Redevelopment Agency Commission had a chance to defend the community’s interest when Lennar asked to be let out of its agreement to build 400 rental units at the Hunters Point Naval Shipyard. But on October 17, the Commission ratified Lennar’s request, accepting the developer’s astounding argument that there is no market for rental housing in San Francisco.

Forget the fact that African-American families in Bayview desperately needed this housing. The Redevelopment Agency sent the same message to these families that the San Francisco Police Department has sent for years: those living in Bayview-Hunters Point have little to no control over its destiny.

Will a successful lawsuit against Herrera’s ruling solve this worsening problem of community disempowerment? At a minimum, a referendum on the neighborhood’s future would likely increase resident involvement and voter turnout. Such an election would keep the spotlight on Bayview’s problems as never before, and unlike the stadium-mall campaign of 1997, this election would focus on resident’s needs, not those of the 49ers and their fans.

As I described on September 20 September 20, Herrera’s ruling was based on a statutory interpretation rather than black-letter law. The City Attorney could just as easily have concluded that the missing documents were not “material” to a voter’s decision to sign the referendum petition.

In reality, since the entire ordinance creating the Redevelopment Area was attached to the petition, few if any signers would have been swayed by the missing documents. That’s why Herrera could easily have concluded that the rights of 33,000 voters should reign supreme over the unlikely chance that a handful would have changed their minds had the documents “incorporated by reference” been attached.

A trial court decision on the lawsuit is not expected for months. Whoever loses in the first round will then take the case to the Court of Appeal. So this lawsuit may not be resolved for three years.

Once the case reaches the Court of Appeal, groups across California are likely to weigh in on the Committee’s side. A published decision upholding Herrera’s ruling would essentially destroy the right to referendum, as legislative bodies need only incorporate hundreds of pages of documents “by reference” in order to insulate legislation from the voter’s review.

In a good omen for the Committee’s case, an Alameda County Judge ruled last week against dismissing a petition filed by the Oak to 9th Referendum Committee against the City of Oakland and the Oakland Redevelopment Agency. This case also involves a controversial City Attorney opinion that kept a referendum on a land use issue off the ballot.

A press conference to discuss the suit will be held today at noon on the steps of City Hall. We will keep you posted on developments in the Committee’s lawsuit in the months ahead.