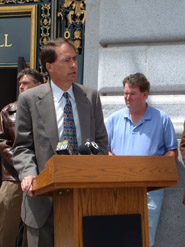 In a case with potentially historic implications, a coalition of vexed taxpayers is suing the City over the diversion of $6.5 million from the Department of Building Inspection (DBI) to other city agencies, plaintiffs announced yesterday at a press conference in front of City Hall.

Representing the plaintiffs in the suit is Mark White of the law firm Chapman, Popik & White. At yesterday’s press conference, White denounced the diversion of DBI funds as a move clearly inconsistent the law.

White stressed that the transfer not only violates local ordinances but also the state constitution. By stripping one agency of funds that, by law, must be used exclusively by that agency, the city has flagrantly abused both city and state law, White said.

“It is of vital importance to low-income San Franciscans residing in slum housing that housing inspection services not be cut,” Collier said. “By diverting funds from this important function, fewer inspectors will be available to handle complaints, life-threatening conditions will take longer to abate, and unscrupulous landlords will avoid making repairs knowing that the City can no longer be aggressive in compelling compliance with basic housing codes.”

“I believe there is a conspiracy here to bring down this department,” he said. “This is not the first time something like this has happened. It’s just not right, and they won’t get away with it.”

The City has now diverted $10 million from DBI over the past two years. Last year, the Brown Administration pushed through a “one-time” transfer of $3 million in DBI funds to Planning.

The City has 30 days to respond to the lawsuit. Plaintiffs are then expected to seek a court order requiring the return of both 2004-05 and 2003-04 funds to DBI.

A ruling should occur by the end of September.