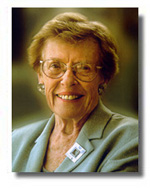 San Francisco’s transient population means that many current residents are unaware of the historic contributions to the city by Sue Bierman, who died Monday at age 82. Bierman not only led the fight to stop a freeway from destroying the Haight-Ashbury and Golden Gate Park, but from 1980-1987 she was the sole voice on the Planning Commission opposing unrestricted downtown office development. After Mayor Frank Jordan booted her off the Planning Commission in early 1992, Bierman ran for Supervisor and served two terms. Sue Bierman was respected by her strongest adversaries and left not a single political enemy. I observed Sue Bierman from the late 1970’s and worked closely with her when she was on the Board of Supervisors. Here are my thoughts on her legacy.

Sue Bierman was the quintessential “neighborhood activist.” She got her start in a successful campaign to stop a freeway from bulldozing her neighborhood, and then spent over thirty years fighting to prevent downtown development from diverting resources from neighborhoods and destroying neighborhood character.

During the Moscone years, Bierman had two slow-growth allies on the Planning Commission. But after Dianne Feinstein became mayor she replaced these allies, leaving Bierman as the Commission’s only voice against unbridled downtown development.

On many Thursday’s, Bierman appeared to be the Commission’s only rational member. No matter how financially shaky the project, no matter how it would negatively impact light, air, views and the city’s quality of life, no matter how much public testimony in opposition, Bierman’s “pro-growth” colleagues voted for approval.

Bierman would inevitably give a long summation of why the project should not be approved, which at least gave audience members the sense that someone of the Commision was listening.

Bierman responded to the mayoral snub by running for Supervisor. Her 1992 victory coincided with the election of Bill Clinton to end 12 years of Republican rule, and with the historic victory of Prop H, which cut the annual rent increase for San Francisco tenants by more than half.

These were the days when political junkies and campaign volunteers hung out at the Registrar of Voters waiting for electoral updates that proceeded at a glacial pace. When Bierman entered the area late that night the entire crowd broke out in applause—-that was the type of affection and respect she had earned from her peers.

Bierman’s first three years on the Board likely made Mayor Jordan regret that he had removed her from Planning. Bierman had never previously been identified with rent control issues, but she quickly became the Board’s leading tenant advocate. During those years, tenant activists and other progressives heavily relied on Bierman’s office, and Sue’s aide June was one of the best and most helpful supervisor aides ever.

Bierman is responsible for passage of Section 37.9(a)(10) of the Rent Ordinance, which made it harder to evict senior tenants and imposed relocation payments for owner move-in evictions.

Although Bierman was always slow- (and some would say anti) growth, she developed a friendship with Willie Brown during their joint opposition to the proposed freeway in the 1960’s. When Brown ran for mayor in 1995, Bierman’s support played a pivotal role in his securing endorsements from her neighborhood activist base.

If Sue Bierman had a leading fault, it was that she was unceasingly loyal. She was supportive of Mayor Dianne Feinstein despite the latter’s promotion of policies that Bierman opposed. She always stuck by Mayor Willie Brown regardless of how his positions differed from her own.

Sue was aligned with the fabled Brown-Burton Democratic machine even though her base was often hostile to this political alliance.

Because she valued loyalty, Bierman was understandably troubled when the San Francisco Labor Council made a joint endorsement in her race for Board President in 1996 (the job went to the leading citywide vote-getter). Although Bierman had a long history of 100% labor support, the Council also endorsed Barbara Kaufman, who was the Chamber of Commerce’s favorite supervisor. Labor split its endorsement because Kaufman agreed to endorse a pro-labor initiative that year.

The result of labor’s deal? Its initiative lost in a landslide but enough pro-labor voters used one of their multiple votes for Kaufman that she, rather than Bierman, won the Board presidency. Mayor Brown’s firm control of the Board prevented Kaufman from engaging in too much mischief, but Bierman never trusted Kaufman. Bierman was the leading Board opponent of Kaufman’s successful plan to add JC Deceauz toilets in exchange for advertising kiosks throughout the downtown area.

Bierman never felt that the city’s beautiful streetscape should be put up for sale.

Personally, I was most grateful to Sue when she agreed in the late 1990’s to abandon her own legislation seeking to make the Tenderloin a Redevelopment Area. After hearing from many speakers about the benefits of Redevelopment, and only hearing from Brother Kelly Cullen, Reverend Glenda Hope, and myself against the proposal, Bierman told the packed crowd “I understand there were only three people speaking against Redevelopment but these are the people I trust in the Tenderloin, and I cannot go forward.”

That statement took integrity and class, both of which Sue Bierman had in abundance.

When term limits ended Bierman’s supervisor career, she became active with the Senior Action Network. After years of listening to public testimony, she now became a frequent public testifier.

Sue Bierman kept abreast of current San Francisco politics, but she was a throwback to a time when people with working-class incomes could afford to buy a house in desirable neighborhoods like the Haight-Ashbury. Today, a person of Bierman’s means could not afford to buy property anywhere in San Francisco.

When you think of Sue Bierman’s enormous contributions to San Francisco, the fact that many people like her can no longer afford to live in the city shows the downside of the city’s transformation since the 1970’s into a financial services, real estate and tourist mecca. But Sue Bierman’s over four decades of civic engagement made San Francisco a better place for everyone, and she will be missed.