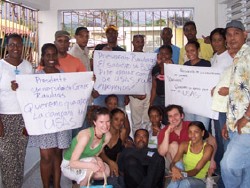 In a move that could radically alter the rules of the global economy, a factory in the Dominican Republic backed by the United Students Against Sweatshops is producing t-shirts and sweatshirts at the same prices as Nike and Adidas, while also paying workers a living wage. Knights Apparel has already passed Nike as the top college supplier, defying experts who have long argued that Nike’s sweatshop wages made it impossible for those paying workers fairly to compete. Knight’s success comes after more than a decade of painstaking work by college anti-sweatshop activists, whose creation of the Workers Rights Consortium built a market for living wage alternatives to sweatshop goods. The students’ success is also the latest example of the power of “positive” boycotts, currently used by UNITE HERE to steer guests to union hotels through INMEX and earlier by the United Farm Workers to offer consumers alternatives to Gallo wine.

Having studied the proliferation of sweatshops since writing a book about Nike’s labor practices in the late 1990’s, I know the sheer number of experts arguing that the global “race to the bottom” is inevitable and beyond the power of activists to change. Fortunately, student anti-sweatshop activists ignored these claims, and have now defied the conventional wisdom.

The story of Knights Apparel is really two stories, with the nuts and bolts of the company’s creation and business plan covered in the July 18 New York Times. The story not covered was the long battle by college students to rewrite the rules of the global economy, as they sought to accomplish what most economists and pundits said was impossible.

The struggle began in the late 1990’s, as students responded to revelations that the clothing with collegiate logos sold in their campus stores were made in sweatshops. Campus anti-sweatshop groups soon formed, and soon won agreements from administrators not to sell sweatshop goods so long as alternatives were available.

Creating these “no-sweat” alternatives was the tricky point. The students addressed this by attempting to beat the capitalists at their own game: they created a Workers Rights Consortium that would help to create a sufficient market for no-sweat goods to support their manufacture.

In other words, the students used the “Field of Dreams” approach. They told manufacturers that if they created apparel and paid a living wage, business and sales would come.

And Knight’s Apparel has turned the students dream into reality. Its product will be on over 260 campuses by September, and over 400 by winter quarter.

The company’s shirts will sell for the same price as those made by Nike and Adidas, whose goods are typically made in places like Bangladesh (15 cent minimum wage) or China (85 cents). In contrast, workers are paid $2.83 per hour at the Alta Gracia factory in the Dominican Republic (whose minimum is 85 cents) that makes Knight’s Apparel.

That’s what possible when you don’t have folks like Nike’s Phil Knight making tens of millions of dollars annually off the poverty of third-world workers.

Perhaps as surprising as this outcome is the fact that it took place over more than a decade, as the movement continued as key student activists graduated and myriad other causes and issues emerged. Students are not typically associated with long-term campaigns for this very reason, which makes the success of United Students Against Sweatshops that much more impressive.

The Power of “Positive” Boycotts

In addition to defying the belief that apparel companies cannot survive by paying a living wage, the students also showed the power of shaping consumer behavior by providing positive alternatives.

Back in the 1990’s, the students faced a choice. They could relentlessly urge students to avoid sweatshop apparel without providing “no sweat” alternatives, or they could help build a market for the latter.

Recognizing that students were going to buy clothes with their college logo, the students wisely chose the latter strategy. And Knights Apparel has finally made this no sweat alternative a reality.

It is the same “positive” boycott strategy that UNITE HERE uses with its INMEX program. The union knows that people need to stay in hotels, so rather than simply tell them which to avoid the program promotes hotels where visitors should stay.

During the UFW grape boycott, consumers were so focused on only buying union grapes that growers clamored to get the union thunderbird on its packages. The UFW could also readily promote alternative wines to Gallo, which helped the effectiveness of that boycott.

While the success of “no sweat” clothing in the collegiate submarket will not entirely rewrite the rules of the global economy, it does provide a roadmap for other market sub-groups. For example, there are thousands of organizations that sell apparel with their logo, and Knight’s Apparel now provides a viable no sweat option.

As unions, religious organizations and community groups turn to producers paying living wages, it will spur the development of additional factories, expanding the market beyond the t-shirts and sweatshirts sold on college campuses. And now that Knight’s Apparel has created a model for collegiate clothing manufacturing, pressure might build for similar alternatives elsewhere in the apparel industry.

Activists have long argued that another type of apparel world was possible. Now students have helped make this socially responsible alternative a reality.

Randy Shaw is also the author of Beyond the Fields: Cesar Chavez, the UFW and the Struggle for Justice in the 21st Century. Follow Randy on Twitter: @RandyTHClinic