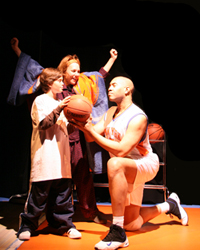 On a small stage that is half apartment and half basketball court everything bounces around the stage including “Mother” (Amy Resnick), as she is called in the play. ‘Mother’ is dying of “Hodgkin’s Disease”. She does everything she can think of to keep the monster at bay. She smokes pot, and tells us about her hilarious experiences with it. ‘Mother’ also has a 12-year-old son. Both Mother and the Son are avid “New York Nicks Fans”. Yeah, this is where the Basketball part comes into the play.

And let me say that it doesn’t just quietly come into the play. These guys on the court pounce on the stage like the real thing. It’s thrilling to witness the energy and the excitement. Now, just throwing some basketballs into the net would not be enough to entertain us. So, these guys show us the pre-game prayers, and they sing us a couple of what could be called ‘Pep Songs’. It peps you up o.k. So much so, that the temperature begins to rise. The ‘Court’ drama draws us into the game and how the ‘Key’ is all worked out.

Mother gives a wonderful nuanced performance. Not one that is laced with pity, but more of a courageous woman who is trying to be strong enough to go outside and play basketball with her son. The actor (Gideon Lazarus) does a terrific job, as the restless kid who just doesn’t seem to understand why ‘Mother’ can’t get out more. Why do you sit on the couch all day? “ He asks.

‘Mother’ begins to hallucinate. During one of these moments one of the star basketball players (Paul Oakley Stovall) comes to visit ‘Mother’. She calls him ‘Player’. He gives pep talks to ‘Mother’ and becomes sort of a “The Basketball Angel” and a marvelous actor. These are special and vibrant moments that they spend together. Never touching – but the bond in her mind is very real. She even visualizes ‘Player’ and the other anonymous guys on the team as they run around the court, pass the ball and occasionally break into some hip-hop music. There is sheer athletic movement and power on that stage. It is truly amazing that all of this can be done in such a small space. In one touching scene ‘player’ comes to ‘mother’ and gets down on his knees to pray with her for strength. Now, there is a vision that you are not likely to forget. Powerful!

“Key” is in a way an odd kind of play. There are many layers to it. It tells many tales about people, who are not always what you might think that they are. There is one thing that may bother some. The young man, whose bunk bed is in the same room – is privy to the four letter words in the teams Locker Room. It didn’t bother me, but I felt that is was worthwhile to mention this in case it would be an issue.

“Key” is about survival and it’s High Octane Action that will bounce you right out of your seats. And these actors will thrill you and help you bounce: Paul Oakley Stoval, Skyler Cooper, D. Anthony Harper, Casey Jackson and Chris Walsh.

RATING: THREE GLASSES OF CHAMPAGNE!!! At The SF Playhouse on Sutter.

SOME OF THE MOST REMARKABLE PERFORMANCES EVER SEEN ARE ON THE BERKELEY REP’S STAGE IN ‘PILLOWMAN’.

For starters there is a little box with a child’s severed toes, a writer who writes books about Children being killed and a brother that was terribly tortured and abused by his parents. He becomes close to being what is called an imbecile.

You want more? I’ll give you more. The writer is accused of helping his brother kill children in the manner described in his books. The detectives that interrogate him have issues of their own. The most abusive one was apparently degraded by his dad and made to get down on his knees whenever he did something that Dad disapproved of. He now uses the same tactic during his demented, over the top questioning. The other detective tells that his Dad was a violent Alcoholic. “That doesn’t bother me he says. I decided on my own that I would be a violent Alcoholic.

I did it on my own.” So here you have two demented detectives berating and abusing a suspect during an interrogation. If it makes you squirm in your seat – then that’s good, because that is exactly what the Playwright Martin McDonough had in mind. Hearing his dialogue come alive is like a five-course expensive meal after a burger at McDonald’s. Hungry for exciting dialogue that is different? Tired of the same old mish-mash of ancient plays? I thought you might be. And I have just the thing to take you away from boredom. And that would be “The Pillowman”.

Beyond the cruelty, is the humor. Granted it is very dark humor – peppered with strong language. I noticed that after the first act (90 Minutes) a few people did not return. Hey – did they expect Snow White and the Seven Dwarfs? This is a grown up play for people that are looking for something that brings new writing and vistas to the stage. The one’s that left – have only them selves to blame for not having the courage to stick it out.

The accused writer makes a pact with the Detectives. If he confesses to what they want him to confess with, he will let that them shoot him in the head, if they promise not to destroy his 400 some stories. He passionately says: “It isn’t about being or not being dead, it’s about what you leave behind.”

There are constant new revelations. Later in the play we find that there is a little girl who thinks that she is Jesus. Her parents keep her practically under lock and key. When she starts to wear a false beard – they tie her to a cross and keep her their for hours. This is one of the stories that are one of the writer’s stories. His brain-damaged brother claims to have followed the story and buries the little girl alive. Truth or fiction? Only if you see this play will you know.

The mystery, the writing the utterly compelling acting in ‘Pillowman’ almost overwhelms the senses. There is so much intrigue going on here that just when you think that you know the answer to everything, you are thrown another curve.

Even the brain-damaged brother sometimes makes more sense than the detectives and his brother. Yes, Pillowman is uncomfortable to watch at times. It’s probably not suitable for Children, although there are two in the play. As I mentioned in the review of “Key” the language is pretty vivid for young ears. Maybe they wear earplugs.

I don’t want to tell you the whole story and won’t. But, you must realize this: There is unquestionable brilliance on the Berkeley Rep stage.

THE CAST: Tony Amendola (Detective Kupolski) is singularly magnetic. Andy Murray (Ariel) the Bad Cop, is frightingly splendid! Erik Lochtefeld (The Writer) is a masterful actor. Mathew Maher (The Brain Damaged Brother) is electrifying. His intense acting goes from humor to tragedy. The performance is stunning and will leave you breathless.

Les Waters directs this masterpiece that takes us on a new adventure.