Stop Union Busting on the Waterfront Rally on Sunday! 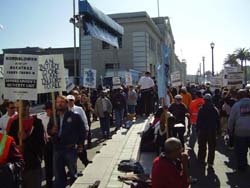 The San Francisco labor movement won a solid victory over the hotel bosses less than a month ago. But whether or not this is still a “union town” is a question being asked out on the piers and docks where our city’s labor movement first got its real legs in the titanic struggles of the 1930s. Two weeks ago, on September 25, the notorious non-union Hornblower company took over the ferries that carry thousands of tourists to Alcatraz every day. Hornblower was awarded the lucrative ferry contract by Bush-appointed political operatives in the “Interior Department,” operating through their subsidiary, the “National Park Service.”

Stop Union Busting on the Waterfront! PICKET and RALLY at Hornblower Alcatraz Pier 33 Sunday, October 15, 2006 — 10 AM.