Stop Fretting About Whether Millennials Will Stay in the City 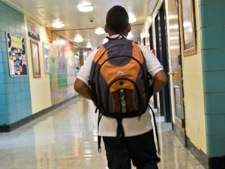 More than 9,000 babies have been born in each of the last five years in Washington, DC — but will their families stay in the city as these kids grow up? A recent study by the real estate company Trulia found that there was just one zip code in DC’s city limits where backpacks outnumbered strollers. Wealthy, west-of-the-park Chevy Chase has more kids in the 5-9 age group than 0-4. Every other part of the city has more babies and toddlers than school-age kids.

This trend is repeated in big cities around the country, according to Trulia. Young parents are happy enough to stay in the city with a little rugrat around — but once those rugrats need to go to school, those parents often start house-hunting in suburban school districts.

We’ve had a vibrant discussion here on Streetsblog recently about whether parents will really find what they’re looking for by leaving the city – and whether this trend will continue.

Improving urban schools is a challenge of huge national significance, especially for parents who don’t have the option of moving away. But Shane Phillips of the Better Institutions blog points out that it might not have much influence on cities’ ability to maintain recent population gains.

Phillips brings a useful perspective when he reminds readers that “Millennials aren’t the last generation in America.” There’s no sign that the declining interest in driving is going to reverse. If some parents move to suburbs, young people will still continue to migrate into cities.

But perhaps more importantly, Phillips writes, when Millennials move to the suburbs — as undoubtedly some will — they’ll demand better suburbs than the ones they grew up in. They’ll want the urban amenities and transportation options they got used to in the cities. That could put them on the front lines of retrofitting suburbia into a less car-dependent environment.