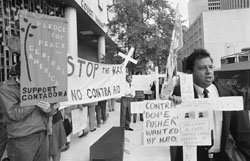 The stimulus vote shows that it will take more than e-mail blitzes, rallies and presidential speeches to enact universal health care, the Employee Free Choice Act (EFCA), or comprehensive immigration reform. Instead, activists must implement a district- by-district, specific targeting strategy that pressures Beltway politicians on their home turf. An excellent model for what needs to be done is found in Neighbor to Neighbor (N2N), which successfully used this approach to limit Reagan Administration efforts to send U.S. military aid to Central America in the 1980’s.

Led by ex-UFW activist Fred Ross Jr., N2N recognized that Congress members and Senators are most effectively pressured in their home districts and states, rather than in Washington D.C. The group targeted politicians regardless of party affiliation, or their support for other progressive issues. Using the house meeting tactic developed by Ross’s father, and that proved so effective in Barack Obama’s presidential campaign, N2N organized key constituencies in swing districts to pressure powerful politicians unaccustomed to feeling the heat.

Among the Republicans targeted was former Congress member and current Senator Olympia Snowe (R-ME), who remains a critical swing vote. But most of those on the receiving end of N2N’s pressure tactics were Democrats. And some, like Wisconsin’s David Obey and former New Jersey Senator Bill Bradley, did not appreciate being pressured over military aid to Central America when they otherwise backed progressive causes.

N2N was not deterred by such arguments. The stakes were so high that when Congress member Sala Burton told Ross that Reagan administration representatives would have promised to pave the streets of San Francisco gold if they thought she would change her vote on contra aid.

N2N did not have anywhere near the resources of current progressive groups, but it assembled a collection of over 100 talented young organizers. These organizers worked in eleven states and eighteen congressional districts, and in 1988 played a key role in winning a 219-211 vote in the House of Representatives to cut off military aid to Nicaragua’s contra rebels. Considering how rare it was for Reagan not to get his way in foreign policy, N2N’s campaign was no less challenging than those progressives face today. In fact, many N2N organizers still play key roles in the labor movement and other progressive struggles, bringing their strategic savvy to such campaigns.

Universal health care, EFCA, and comprehensive immigration reform all require the votes of moderate Democrats. Some of these Democrats have generally pro-labor voting records, but are wavering around EFCA. Others have many Latino voters in their districts, but do not want to vote on the “third rail” issue of immigration reform. And we know from the Clinton’s failed efforts in 1993-4 how moderate Democrats can readily jump ship absent a targeted, district based strategy.

Unless constituents target politicians in their home districts and states, the following scenario is likely: moderate Democrats will support two of the three key issues above, but in different combinations, so none end up passing. Politicians will then tell key constituency groups that they should not be attacked over a single vote, since they backed progressives on the other big issues.

Under the N2N strategy, politicians are publicly pressured not by prominent leaders like SEIU’s Andy Stern—who CNN’s Lou Dobbs has already accused of “threatening” congress members over EFCA—but by their own constituents. This constituency pressure insulates labor, immigrants rights and other progressive groups from alienating politicians whose votes they will need on other issues, and is essential for
enacting the broader progressive agenda.

Unions and progressive groups like MoveOn have the resources to build powerful grassroots campaigns in virtually every swing district and state. The use of house meetings and other community organizing strategies will remind many of the Obama campaign; but neither the President nor his Obama for America organization is likely to target the wavering Democrats whose votes will make the difference.

That’s why labor and its community allies must start now in working to build constituency pressure on swing politicians. Keeping wavering Democratic votes on board on issues like EFCA, immigration reform and universal health will not be easy. Unless politicians are convinced that their constituents, rather than simply D.C. lobbying groups, are insisting they support such measures, not even the persuasion skills of President Obama will secure their votes.

Randy Shaw is the Editor of Beyond Chron and the author of the new book,

Beyond the Fields: Cesar Chavez, the UFW and the Struggle for Justice in the 21st Century (University of California Press), which includes a discussion of Neighbor to Neighbor’s ongoing legacy.