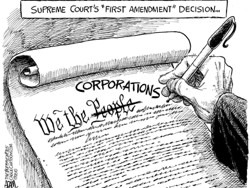 Debra Saunders, in her latest SFGate column, takes us on a joyride with the corporate spinmeisters now benefiting from the Supreme Court’s ruling in Citizen’s United, the landmark case that equates speech with money in the most blatant way yet, opening the floodgates to corporations to pour gazillions into ads for their favorite candidates.

But this free speech, says Saunders, merely a level playing field, since labor unions are also afforded this privilege, a comparison that brings to mind the famous quote of Anatole France that “The law, in its majestic equality, forbids the rich as well as the poor to sleep under bridges, to beg in the streets, and to steal bread.” Let’s be real, unions may have some clout left on the campaign front, but they are nowhere tipping the scales in their favor when corporate bars of gold weigh down the other side of the political scale.

In this particular column, Saunders’ barbed words are aimed at a favorite target of hers: the San Francisco Board of Supervisors, who recently joined a growing number of municipalities calling for a Constitutional amendment overturning the Citizens United decision and undoing the concept of corporate personhood (a concept that first appeared in another Supreme Court decision, the Gilded-Age decision called Santa Clara County v. Southern Pacific Railway Company).

Corporations says Saunders “don’t have the same rights as people: they can’t vote and they can’t run for office.” No but they can buy votes and decide who runs for, and wins, public office, not to mention grease the halls of Congress and state Capitols with their “free speech” dollars.

If you don’t believe that, you are free to look for them under the bridge with the poor people exercising their free speech rights with signs saying “homeless corporation; will peddle influence for cash.”