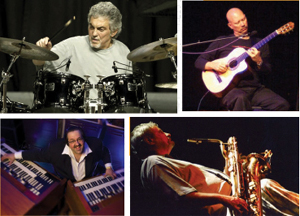 A well-respected drummer who has appeared in many types of settings in many genres, Steve Gadd’s impressive technique and flexibility have been influential during the past 20 years. He started playing drums at the age of three, sat in with Dizzy Gillespie when he was 11, and after extensive study and a stint in the Army, Gadd became an important studio drummer beginning in 1972. Among his more significant jazz associations have been with Chick Corea (starting in 1975), Bob James, Al DiMeola, Tom Scott, Grover Washington Jr., David Sanborn, the group Stuff, the Manhattan Jazz Quintet, and his own impressive band (the Gadd Gang) which recorded for Columbia in 1986 and 1988. Next week, Gadd brings an all star line-up to Yoshi’s in San Francisco with keyboardist Joey DeFrancesco, saxophonist Ronnie Cuber and guitarist Paul Bollenback.

Gadd is one of the most sought-after studio musicians in the world. Regarded as the most influential drummer in contemporary music, Gadd can play anything, easily bridging different musical styles. His feel, technique, and musicality on such tunes as Paul Simon’s “Fifty Ways”, Steely Dan’s “Aja”, and Chick Corea’s “Nite Sprite” were so awe-inspiring and his concepts so innovative that they instantly assured his special position in the history of the percussive arts.

Gadd attended the Manhattan School of Music for two years, then finished at Eastman School of Music. Before that, he studied privately with Bill and Stanley Street and John Beck. He established himself with Chuck Mangione, then spent three years in the Army prior to coming to New York and doing studio work in 1971.

He rapidly rose to prominence on the studio scene and has since played with a wide variety of artists, including Carly Simon, Phoebe Snow, Aretha Franklin, Al DiMeola, Stanley Clarke, Rickie Lee Jones, Tom Scott, Frank Sinatra, and Stuff.

After a period of touring and recording with his own band, the Gadd Gang, he provided the spark that ignited Paul Simon’s South African inspired, Grammy Award-winning recordings and dynamic live touring band.

Today, Gadd is still as busy as ever, balancing frequent recording dates with a hectic touring schedule. Some artists include Eric Clapton, David Sanborn, Marcus Miller, Joe Sample, and jazz piano virtuoso Michel Petrucciani. His performance at Yoshi’s wraps up a whirlwind European and U.S. tour.

E. “Doc” Smith is a musician and recording artist with Edgetone Records, who has worked with the likes of Brian Eno, Madonna, Warren Zevon and Mickey Hart among others, including Paul Bollenback. He is also the inventor of the musical instrument, the Drummstick. He can be reached via http://edgetonerecords.com/edoctorsmith.html