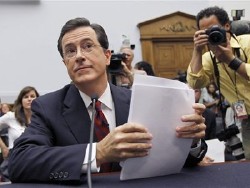 Last week, comedian Stephen Colbert testified before Congress – in character – to talk about his experience picking corn for one day, as part of the United Farm Workers “Take Our Jobs” campaign. The conclusion, he said, was to support immigration reform. The reaction from Republicans, the traditional media, and even Democrats like Steny Hoyer was shock and outrage that Congress would “waste its time” – and they went out of their way to argue he wasn’t funny. Which is exactly how they reacted in 2006, when Colbert spent 24 minutes roasting President Bush at the White House Correspondent’s Dinner – speaking truth to power in a way that no “straight man” could get away with. Any Democrat who disapproves of what Colbert did deserves to lose in November.

In December 2006, after Democrats had won back Congress, I wrote a retrospective – where I honored Stephen Colbert’s White House performance for being a major milestone of a remarkable year. “It was a great 2006 moment,” said a friend of mine – as it set the tone at how the media let George Bush get away with lying us into war, by not asking tough questions.

Four years later, Democrats are in trouble – because Republicans and Blue Dogs have colluded to obstruct every part of the progressive agenda that elected President Obama in 2008, and the Democrats refuse to fight back as hard. It’s extremely depressing to see polls showing Republicans ahead in the “generic ballot” – while at the same time, voters hate Republicans more than Democrats.

In other words, we’re in a terrible place where voters are angry and disappointed with the Democrats – so they’re going to “teach them a lesson” by voting Republicans who they hate even more? Of course, the problem here is an “enthusiasm gap.” Democratic voters may simply abstain from voting out of despair – making a bad situation worse, and putting Republicans when they don’t deserve to win.

When Colbert roasted George Bush in 2006, it woke up the media to how they had let the Worst President in American History get away with pre-emptive wars and torture. And when Colbert spoke last week (invited by Bay Area Congresswoman Zoe Lofgren), his dead serious message about immigration reform – albeit through the lens of a satirical pundit – was devastatingly effective in highlighting the plight of migrant farm workers:

Now I’m not a fan of the government doing anything, but I’ve gotta ask: why isn’t the government doing anything? Maybe this ag-jobs bill would help, I don’t know, like most members of Congress – I haven’t read it. But maybe we could offer more visas to the immigrants, who let’s face it, will probably be doing these jobs anyway and this improved legal status might allow immigrants recourse if they are abused. And it just stands to reason to me that if your co-worker can’t be exploited, that you are less likely to be exploited yourself and that, in itself, might improve pay and working conditions on these farms – and Americans may consider taking these jobs again.

The Republican response to Colbert’s testimony last week was vicious – as they went on Fox News to say how “inappropriate” it was to have a funnyman take up Congress’ time. Of course, their hypocrisy is shameless. When Republicans controlled Congress in 2002, they had Elmo – the furry character on “Sesame Street” – come testify about the need for music education. At least the Democrats managed to bring a real human being for a moment of levity.

Even so-called “neutral” pundits were un-amused – NBC’s Chuck Todd said he was “offended.” Some Democrats even piled onto the right-wing attack with unhelpful comments. Steny Hoyer – who as House Majority Leader would likely take over the Democratic Caucus if Republicans re-gain their majority in November – went on Fox News, and called it an “embarrassment.”

Not only do these people lack a sense of humor, but they fail to understand that Colbert had a very serious message – one that Democrats had been too incompetent to convey, amid the determined Republican obstruction. Far too often, Colbert and his counterpart Jon Stewart can get away with a progressive message because they are comedians. Democrats should be delighted that Colbert was able to crack through that wall – like he did back in 2006.

Thankfully, not all Democrats are clueless. House Speaker Nancy Pelosi praised Colbert, calling him an “American” who “has a point of view” and “can bring attention to an important issue like immigration.”

California Congresswoman Judy Chu directly responded to the backlash, as she told the blog Firedoglake: “The only thing Mr. Colbert’s testimony ‘made a mockery’ of today was our nation’s failed policies toward migrant farm workers and other undocumented immigrants … I think it’s safe to say that the lone day Mr. Colbert spent working in the fields earlier this year gave him a better understanding of this issue than many people covering this story possess.”