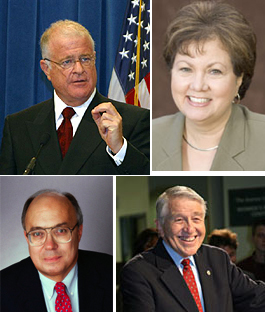 Last week, housing advocates couldn’t muster the 21 votes needed to pass SB 464, which would curb speculator evictions under the Ellis Act by limiting its scope to landlords who owned the property for at least 5 years. Not even reducing it to three years was enough to overcome opposition from the real estate industry. After Elaine Alquist of San Jose betrayed tenants by flipping her initial support, and Jack Scott of Pasadena said he would only support it if was whittled down to one year, it became clear that SB 464 wasn’t going to pass – so sponsor Sheila Kuehl delayed the vote until January. This would never have happened in a State Senate run by David Roberti or John Burton, but current Senate President Don Perata never made Ellis Act reform a “leadership” issue. And although she worked hard in the final days, State Senator Carole Migden’s efforts were too little, too late. But advocates did secure the support of a swing vote, Leland Yee, and their efforts with Yee provide a roadmap for passing SB 464 next year.

It’s actually incredible that SB 464 got as far as it did – eighteen “yes” votes in the State Senate, which is the more conservative body in the state legislature. Landlord and realtor lobbyists outnumber tenant lobbyists in Sacramento by a 12-1 margin, and they have shown a ruthless willingness to oppose even the most basic and incremental reforms to the Ellis Act. While Democrats control both chambers, most of the moderate legislators will not support a bill that will arise the wrath of the realtors in their districts, especially if Governor Schwarzenegger – who owns rental property in Santa Monica – will veto it.

Housing advocates have generally prevailed in Sacramento when they had at least one of two things: (1) a strong tenant movement that had a grass-roots presence in pivotal districts, or (2) legislative leadership who was willing to take heat from the realtors. The reason it took 17 years for landlords to pass Costa-Hawkins is simple – David Roberti of West Hollywood was President of the State Senate, and he would always arrange to have it killed in committee. When San Francisco’s John Burton was Senate President from 1998 to 2004, tenants won many victories at Ellis Act reform like (a) a one-year notice for elderly or disabled tenants, and (b) exempting residential hotels (SRO’s) that provide housing for formerly homeless people.

But the leadership was silent about SB 464, leaving Sheila Kuehl and other supporters hanging dry to corral votes while the realtors ruthlessly applied pressure. While State Senate President Don Perata represents Berkeley and Oakland (two progressive cities whose tenants have struggled with the Ellis Act), he was never a vocal supporter – despite wishful thinking to the contrary. Perata told supporters he would vote for the bill when it came up, but he never made it a “leadership” issue and did not put pressure on Senate Democrats to get it passed.

It’s somewhat expected that a Democrat from the Central Valley would oppose SB 464. But it’s inexcusable that Elaine Alquist of San Jose would cave in after the realtors, who were in Sacramento last week for their convention, confronted her about it. Nor should Jack Scott of Pasadena have chickened out, or Joe Simitian (whose district includes East Palo Alto) come out against it.

The plain fact is that if Don Perata had made it a legislative priority, he could have brought these wavering Senators in line.

But it is also a defeat for Carole Migden, who is in a tough re-election fight for her San Francisco seat. Migden was always a solid supporter of SB 464, but she didn’t work to get it passed until she had to shore up her progressive credentials. Last week, Migden devoted her time and energy lobbying Senators to get it passed, while promising constituents that she would fight hard to deliver. “It’s terribly important to send folks with the heft and continuity to bring things home,” said Migden in a candidates’ debate with her challenger, Mark Leno. Now her effectiveness in Sacramento is called into question.

Ironically, Don Perata could have used SB 464 to help Carole Migden’s re-election chances. When Mark Leno formally declared in March that he would challenge the incumbent Senator, Perata told the Chronicle’s Matier & Ross that by taking on Migden, Leno was “campaigning against the good work of all 25 Senate Democrats. To get to her, Mark must come over us.” Instead, Perata showed that his commitment to Migden’s re-election was pure rhetoric, as he denied her the opportunity to deliver for her San Francisco constituents.

Politics aside, SB 464 was probably not going to pass without a systematic grass-roots effort to put pressure on the wavering legislators. And that takes time and energy to organize a coalition that is both strategic and effective. Housing and labor activists in San Jose could have gotten Elaine Alquist to switch her vote, and there are many tenants who live in Jack Scott’s Pasadena district. A more organized effort in San Mateo County could have made Joe Simitian think twice, and serious noise from the East Bay might have placed the issue on Don Perata’s radar.

Nevertheless, housing advocates were successful in getting one moderate Senator to support Ellis Act Reform – Leland Yee of San Francisco. To do that, they rounded up more than just the usual suspects. The local Democratic County Central Committee passed a resolution urging the bill’s passage, and long-time supporters of Yee wrote to request his support. After a weekend meeting with a diverse group of labor leaders, Asian-American activists and environmentalists, Yee told Sheila Kuehl the following Monday that he would vote “yes” on SB 464.

“Tenants don’t have an automatic 21 votes in the State Senate,” said Randy Shaw, executive director of the Tenderloin Housing Clinic and publisher of Beyond Chron. “If we’re going to get Alquist and Scott’s vote in January, we’re going to have to put grassroots pressure in their districts to do the right thing.”

And if Yee is any example, such work requires not just housing activists, but also progressive allies to let the Senator know that a wrong vote could carry consequences beyond just one constituency. Housing advocates will have another chance to pass Ellis Act Reform, and in order to prevail, the work will have to start now.

EDITOR’S NOTE: As a private citizen, Paul Hogarth has endorsed Mark Leno for State Senate but plays no advisory role in the campaign. When he lived in Berkeley, he also campaigned for Don Perata’s opponent, Dion Aroner, in the 1998 special election. Send feedback to paul@beyondchron.org