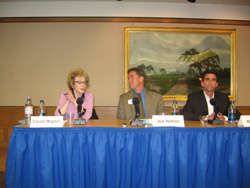 The three candidates for the 3rd State Senate District debated last night at Hastings Law School – mere hours after the Fair Political Practices Commission (FPPC) fined incumbent Carole Migden $350,000 in campaign finance violations. When asked about it at the forum, Migden replied that it was due to her lack of attention while recovering from leukemia. While Migden and Assemblyman Mark Leno have been campaigning for the past year at multiple forums, last night’s debate featured a new candidate – ex-Assemblyman Joe Nation – who is a relative unknown in San Francisco. Nation made it clear last night that he was running because of climate change, but there were few other issues where he stood out. With the election in less than three months, it will be important to vet where he stands on other issues.

As I’ve mentioned at prior forums, the major difference between Mark Leno and Carole Migden is not ideological but programmatic – and this was evident against last night. Migden says that she “gets things done” in the State Capitol, whereas Leno says he’s “worked on issues that most people had not taken on.” One questioner even pointed this out when he asked the candidates about LGBT rights – as he identified Leno as a big-picture idealist and Migden as an incrementalist.

But the wild card in this race is Joe Nation of Marin County, who entered the race just last month and is unknown to most San Francisco voters. Nation acknowledged this during his opening statements, and it was clear throughout the 90-minute forum that climate change is his passion. He has spent the last two years consulting multinational corporations on how to be environmentally sound, and said he would “not be in this race if it wasn’t for that issue.” But it was hard to figure out where he stood on a multitude of other issues.

Earlier that day, the FPPC announced it had levied a $350,000 fine against Carole Migden for campaign finance violations. This is the largest fine in FPPC history against a state politician, and it follows a lawsuit that Migden filed against the agency. Before the debate started, people were talking about it – and a large number of TV news stations were on hand to get a quick soundbite from the Senator.

“I want to be very forthright,” said Migden when asked about it at the forum. “Ten years ago, I was very ill. I was diagnosed with a disease that was fatal, and some things were slacked – and the people who did my books were not professionally trained.” Thus, she said, mistakes were made in campaign filing. Back in May, when Migden was involved in a car accident, she likewise attributed her impaired driving to leukemia medication.

In what has been a very acrimonious campaign, the most revealing exchange was when each candidate was asked to highlight their opponents’ strengths and weaknesses:

“I served with Joe Nation in the legislature,” said Leno, “and he was a good guy who tried to bridge the partisan divide which had mixed results – so that’s both a positive and a negative. Carole Migden – her record speaks for itself, but I believe that there are some serious ethical lapses.”

“[Mark Leno] quotes ethics as the Talmud,” said Migden, but alleged that he has ethical problems of his own. “He’s a sharp dresser, and I wish him well in any pursuit other than my job. Joe Nation’s a nice guy, and I think he’d do a better job solving global warming than worrying about who should represent District 3.”

Nation was far more concise. “Carole Migden is tenacious, Mark Leno is passionate, and I will try to do both,” he said. How he’d match their voting record remains to be seen.

EDITOR’S NOTE: As a private citizen, Paul Hogarth has endorsed Mark Leno for State Senate. He does not play an advisory role for the Leno campaign.