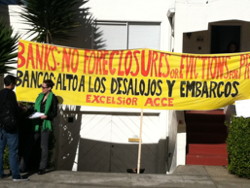 In April 2012, following the introduction of the Homeowner Bill of Rights (SB 900 and AB 278) by Attorney General Kamala Harris & California legislative leaders, Courage Campaign launched The Foreclosure Flashlight. Our purpose was to shine a light on key California legislators, how foreclosures affected their districts, how much money they’ve taken from the banking industry, where they stood on a strong, pro-homeowner bill, and to encourage Californians to contact their legislator. Over the next several months as more and more allied organizations, bloggers and activists used the whip count, one by one, we won the key votes.

On June 28, by a vote of 4-1 (with one abstention) the Homeowner Bill of Rights passed out of its special conference committee. And yesterday, it passed both houses of the California Legislature and headed to Governor Brown’s desk for signature. This marks an unprecedented victory over Big Bank lobbyists to pass fundamental reform that ends the most deceptive and unethical foreclosure practices, including ending the inability to sue in court if a Californian’s home is illegally foreclosed upon, and ending the practice of “dual tracking” where a bank begins the foreclosure process while still in refinance negotiations with the homeowner.

Help us ensure Gov. Brown signs the Homeowner Bill of Rights into law, and to fight back and win again over big bank lobbyists who will work at every turn to undermine implementation through the regulatory process by clicking here.

To learn more about the Homeowner BIll of Rights, check out Attorney General Harris’ summary.