State Could Pass Real Budget Reform, But Will Require a Campaign 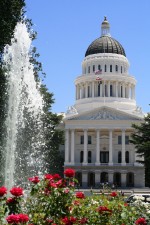 A new statewide poll proves that California voters could repeal the “two-thirds rule” in the state legislature – if advocates devote real resources behind a campaign. It’s never easy to get the state to pass such a thing, and prior attempts have failed. But our current crisis screams for this structural reform, and now may be the only time it could ever pass – if progressives make it a top priority. A 47-41 plurality supports bringing down the budget threshold to 55%, but the measure fails by six points if you only count “likely voters.” In stark contrast with optimistic views about the national scene, Californians are in a sour mood about the Governor, the budget and the economy. Most notably, Republicans despise their own state legislators – precisely the politicians to blame for this mess. But voters won’t get the chance to scrap the “two-thirds rule” in the May 19th special election. It won’t be on the ballot, but six measures will – including Proposition 1A, which gives the state a permanent fiscal straitjacket. And right now, voters aren’t inclined to support that.

For years, the state has been held hostage by a right-wing minority that is getting less and less relevant in the eyes of Californians. But because we are one of three states that don’t require a simple majority to pass a budget, Democrats must make painful compromises to keep the lights on. With the economy in ruins and a dire need to help those suffering, these Republican dinosaurs have extracted the ultimate concession for passing a budget – call a special election, which includes a “spending cap.” In exchange for keeping a few tax hikes on the books until 2013, Proposition 1A would inflict the state with the final Howard Jarvis blow – prevent the state from spending part of its revenue when we have unmet needs.

But a PPIC poll released last night suggests that Californians aren’t buying it. Prop 1A would lose 39-46, although there hasn’t been much of a campaign yet waged against it. And it’s a lot easier to defeat ballot measures than to pass them. Voters generally don’t know the substance of propositions, and will never have time to read or understand the details. If you inject enough doubt, a number will default to “no” – even if they liked the idea in the abstract. We saw this happen last year, for example, with Proposition 98 – the ballot measure to end rent control. Only having 39% say “yes” before the negative campaign starts is not a good sign.

Ironically, Republican voters are far more opposed to Prop 1A than Democrats. That’s because right-wing zealots are upset that it would extend a sales tax increase, the vehicle license fee and an income tax hike – and have been spewing that message to their party base. But their hatred of all taxes has made them miss the forest for the trees, given their agenda is to shrink the size of government. Even if Prop 1A fails, these tax increases will stay on the books until 2011. Prop 1A’s spending cap, on the other hand, is permanent. As the Legislative Analyst reported, “once the effects [of the taxes] have run their course, Prop 1A could continue to have a substantial effect on the state’s budgeting practices.”

Meanwhile, yesterday’s poll shows how pessimistic California voters are about the state. 71% say the state is going in the wrong direction, and 93% say we’re in a recession (with nearly two-thirds calling it a “serious” recession.) They are hopeful about how things are going nationally – President Obama, Congress, Nancy Pelosi and our two Senators all get high marks – but are downright depressed about the state. Only 32% approve of the job that Governor Arnold Schwarzenegger is doing (56% disapprove), and the legislature’s poll numbers are in the toilet. While the nation is progressing, our state is lagging.

But here’s the statistic that I found most interesting, and could help drive a successful campaign to repeal the “two-thirds rule.” Voters never say they like the legislature, but keep re-electing them – so the poll asked what they thought about their own legislators. Democratic voters aren’t crazy about their representatives, but gave them respectable marks. It’s Republicans who don’t like their legislators – by a 3:1 margin.

Why is that important? Because Republicans in the state legislature are the ones to blame for this budget mess. All signed the infamous Grover Norquist Pledge to never vote for a single tax hike whatsoever in any way, shape or form. And their conduct has shown that they would rather see the state fall off a cliff than to support tax increases. Past efforts at scrapping the “two-thirds rule” tried to cast blame on both sides – with TV commercials that showed legislators in a food fight. It didn’t work, because all the opposition had to do was accuse the proposition of “making it easier to raise taxes.” This time, we have a simple culprit – right-wing ideologues who aren’t popular with their own constituents.

I’ve argued that the public mood over the budget demands that we pass reform now to repeal the “two-thirds rule.” The PPIC poll shows it’s winnable, but that advocates still have a lot to do to succeed. Nearly half said it was a “good idea” to lower the state threshold to pass a budget to 55%, with 41% opposed. But when the sample only had “likely voters,” the proposal failed by a 49-43 margin. A well-funded effort must be taken, which includes resources to put it on the ballot – and then even more resources to combat predictable opposition.

And this means the state Democratic Party – along with other progressive institutions – must make it a top priority. When I noted that the public mood demanded budget reforms, I argued the worst thing that could happen out of this crisis is if some phony reforms were presented as “solutions” – when what we need are more structural changes. Right now, we have a special election with more options like Prop 1A. It’s criminal that voters will be asked to make this choice, when the special election should let them scrap the “two-thirds rule.”