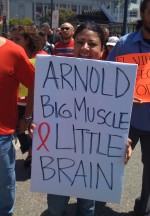 It’s official. With the new state budget, the City is losing more money from Sacramento this year than what we have gained from Washington. President Obama’s stimulus means that San Francisco is getting $92 million more from the federal government than last year, but the combined February and June budgets from Sacramento took $98 million away. And that doesn’t count the $109 million in local tax revenue the state will “borrow” from us to balance their budget.

Virtually all the state cuts affect health and human services, making it even more crucial that the Board of Supervisors protect the $43.7 million in “add-back” money they fought so hard to restore. Mayor Gavin Newsom will propose $18.4 million in unilateral mid-year cuts in response to the state budget, but the deal struck with Budget Chair John Avalos is that he must give the Board a formal chance to weigh in. And because Supervisor David Campos’ amendment put part of the City budget on reserve, the Board still controls up to $12 million in Police and $6.5 million in Fire Department funds. It’s time to use that leverage, and revisit those budgets.

Barack Giveth, But Arnold Taketh Away

According to the Mayor’s initial budget proposal on June 1st, San Francisco will get about $92 million more in federal funds this year – largely from the President’s stimulus package. But even before the state budget was finalized last week, our funding from Sacramento had already been cut by $62 million. Now, cumulative state cuts to the City from the February and June budgets are at least $98 million, wiping out the federal stimulus.

To plug a $26 billion deficit, the state budget made a total of $15 billion in cuts, and “borrowed” up to $11 billion from local governments. The state is required by law to “pay back” localities within three years – with interest. Rather than a balanced approach at solving the budget crisis by passing some revenue, the state simply cut and borrowed.

Here is how the state budget numbers translate for San Francisco, in a preliminary report released by the City Controller: (a) $36.4 million in cuts – almost entirely affecting health and human services, (b) $18.6 million in Redevelopment funds “borrowed” and (c) a $91 million hit in “borrowed” local property tax revenue.

According to a recent New York Times editorial, California is not alone. States are in tough times and have to make fiscal sacrifices, with cuts that canceled out most of what they got from the federal stimulus. “States cannot avoid raising taxes to help balance their budgets,” warned the Times editorial. “But tax increases on high-income residents are less harmful than spending cuts.”

But Governor Schwarzenegger – and the Republicans in the state legislature – refused to support any tax increase whatsoever. They would not repeal $2 billion in corporate tax loopholes that were placed in the February budget, refused to consider an oil severance tax (putting them to the right of Sarah Palin on that issue) and opposed raising the upper-income tax bracket that GOP Governors Ronald Reagan and Pete Wilson agreed to do when the state hit hard times.

According to the City Controller, San Francisco can borrow the $108 million it is losing from the state “borrowing” our redevelopment and property tax revenue – so that figure should not translate into immediate budget cuts. But we still must deal with the $36.4 million in direct state budget cuts.

The City budget that Mayor Newsom and the Supervisors passed set aside an $18 million “safety cushion” to deal with future state cuts, and this money will now be used to back-fill the impact. But it means we must find another $18.4 million in cuts (or revenue alternatives) for San Francisco.

Practically all of the state cuts are in health and human services. Out of the $36.4 million in direct cuts to San Francisco, $20 million went to the Department of Public Health and $16 million to the Human Services Agency. Only the Sheriff’s Department (and no other City agency) also got hit by the state budget – with $500,000 from an extra day of monthly furloughs. Cuts in the state prison system will also mean the Sheriff has to absorb more inmates at the County Jail – but we don’t know yet how much more that will cost.

These cuts are hitting departments that have already been ravaged. When Mayor Gavin Newsom submitted his City budget proposal in June, it was the first time in recent history that more local General Fund dollars would go to Police than to Public Health, and more to the Fire Department than Human Services. He proposed cutting $24 million out of Human Services, and $97 million from Public Health. (NOTE: While Newsom announced on June 1st that public health would only get a $43 million cut, Beyond Chron quickly disproved that claim.)

The Board of Supervisors did what they could to stop the bleeding. During the “add-back” process, the Budget & Finance Committee managed to save $43.7 million in programs – work that now hangs in jeopardy, as the Mayor makes mid-year cuts to find $18.4 million. All the DPH-funded programs that the Board restored only totaled $12.5 million – or less than what the state is now cutting in public health funds. Human Services “add-backs” totaled $4.1 million – or a quarter of what the state is now slashing from that department.

When you break it down further, it gets scary. The Budget Committee saved about one million dollars in cuts to AIDS housing, prevention and treatment. Now, the state cut $4.6 million of the AIDS money we were counting on. Eight million dollars in mental health and substance abuse funds were restored during the “add-back” process, but the state just cut $3 million. The Board worked to preserve $1.28 million to keep homeless shelters open and provide other direct homeless services, but the state has now cut $2.8 million in TANF shelter funds.

Health and human services already suffered cuts at the local level. Now with the state budget, we need to make cuts elsewhere.

The “official” budget season is now over, and the Board of Supervisors don’t have much power to make appropriations like they did in June and July. The Mayor can make unilateral mid-year cuts because projected revenues from the state are not there, and in the past he has not treated the Board like equal partners. A Charter Amendment to remedy this inequity failed to get put on the November ballot, so for now this is the system the Supervisors are stuck with.

Budget Chair John Avalos, however, got Newsom to agree to a certain level of accountability – codified in the budget ordinance. After the Controller completes his analysis of state budget cuts (this week’s report was only preliminary; expect a final report by September 14), the Mayor has 21 days to submit a plan for mid-year cuts to the Supervisors – in other words, submit a supplemental de-appropriation. The cuts cannot take effect until 45 days later, giving the Supervisors time to review the plan and hold hearings. In other words, no mid-year cuts can go into effect until two months after the Controller’s Report.

The Supervisors can approve the Mayor’s mid-year cut proposal, amend it or “do nothing.” It’s not an ideal situation (after all, amending it would require a super-majority), but it will be a marked improvement over the last mid-year cuts. Back then, Newsom never even submitted a proposal to the Board for formal approval. And only because the Supervisors proposed their own mid-year cuts did we even have formal hearings. This process will give activists breathing room to push for different budget solutions, and it’s time to come up with a creative approach now.

When the Supervisors negotiated the City budget in June, they secured some reductions in the Police and Fire Departments from what Mayor Newsom had initially proposed. But compared with what other agencies have sustained, we still don’t have a real “share the pain” budget.

Five million dollars off the Police budget still gave them $9 million more than what they got last year, and a $6 million cut from the Fire Department still gives the bloated agency a two million dollar raise. In contrast, Human Services took a $20 million hit in the budget and Public Health got even more – despite a historic level of “add-back” money that the Board managed to scrounge up.

Normally, demanding that these agencies “share the pain” can only be done during budget season — when the Supervisors still have some clout. But this year, they can still make such demand — thanks to a last-minute maneuver at the July 21st Board meeting.

Before passing the budget, the Board voted to put $45 million of the City budget “on reserve.” Sponsored by David Campos, the amendment (which is in the final document that the Mayor signed) requires Newsom to come back to the Supervisors before spending that money – which now gives them leverage if he makes cuts to health and human services. Twelve million of the money in question is in the Police budget, and $6.5 million is in the Fire Department. In other words, up to 18.5 million dollars in cuts could be made to the Police and Fire Departments because of this reserve.

During the budget season, Beyond Chron analyzed the Fire Department budget – and identified over eight million dollars the City could cut that sensibly targeted the top brass, without re-opening negotiations their union contracts. Another six million dollars could be found if the union – like all other public employee unions – agree to a “give-back,” for a total of $15 million. But the Supervisors only cut $6 million. The Board still controls another $6.5 million of their budget in “reserves,” and now is the time to ask for a few concessions.

The Police Department could also be cut, as the Supervisors still have $12 million of their budget on reserve. But it will be trickier, because there are not as many superfluous “top brass” positions like in the Fire Department. The Police budget has exploded in recent years due to a generous union contract Newsom negotiated in 2007, and most of the increased costs come from retirement. We would need cops (and firefighters) to increase their contributions to their retirement fund, which could help generate savings for the City. After all, they explicitly promised to do so when the voters gave them 90% pensions.