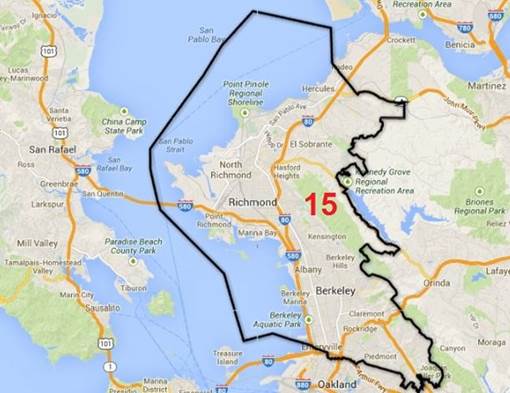 In what might be the strongest field in California state legislative history, seven prominent Democrats are facing off in the East Bay D15 Assembly race to succeed Tony Thurmond (who gave up his seat to run for State School Superintendent). The top two in June will square off in November.

I understand why this race has attracted so many current officeholders. But before analyzing the race, let’s go through the candidates (in alpha order):

Judy Appel: A Berkeley School Board member who I got to know years ago when she was an attorney for the Coalition on Homelessness, San Francisco.

Dan Kalb: An Oakland City Councilmember, Kalb has been a city leader on tenant, housing and environmental issues.

Andy Katz:  Katz has served for eleven years as an East Bay MUD Director (Katz has sued my organization on behalf of a former employee but this does not impact my view of his candidacy).

Buffy Wicks: The only top candidate not currently in public office, Wicks is a former campaign strategist for Barack Obama and Hillary Clinton who has used her national connections to already raise over $500,000 in the race.

Why So Many Strong Candidates?

The D15 race attracted so many elected officials because it covers multiple cities. With no candidate starting with a strong district wide base, the idea is that a strong turnout from their core constituency—-in Berkeley, El Cerrito, Oakland or Richmond— could carry them to the November runoff.

What are the issues?

Historically, top candidates for D15 differ little on issues. Instead, a candidate’s success comes from district-wide name recognition and their personal demographics.

Topping the list of state legislative issues that voters will care about is San Francisco State Senator Scott Wiener’s SB 827, which would facilitate housing on or near transit corridors. State Senator Nancy Skinner, whose district includes Assembly District 15, is a co-sponsor of the bill and a housing champion.

If SB 827 does not pass this year, the winner of this race will be voting on it. So a candidate’s stance will be on a lot of voters’ minds.

Berkeley’s Mayor called SB 827 a “declaration of war against our neighborhoods” and there are many Berkeley voters who share that view. I suggest those interested in this issue read the candidate’s responses to the East Bay for Everyone  questionnaire.

Rochelle Pardue-Okimoto was the only unequivocal supporter of SB 827, with Jovanka Beckles also speaking very favorably about it. The other candidates see merit in the measure and would potentially support it after various amendments are made.

Subsequent to the questionnaire Ben Bartlett called the measure an engine for displacement. Kalb then said if he didn’t get the changes he wanted he would kill it. The letter opposing SB 827 submitted to Wiener yesterday from 37 Los Angeles groups affiliated in act-LA (Housing Jobs a&Transit for All) is likely to make D15 candidates even more skittish about supporting the bill prior to the sponsor making long planned amendments.

On Costa Hawkins repeal, the questionnaire had Kalb, Pardue-Okimoto, and Appel expressly supporting repeal or substantial modification. Wicks said Costa-Hawkins should be “fixed,” which led East Bay for Everyone to identify her as the only candidate not clearly backing repeal.

Considering Costa-Hawkins is unlikely to be repealed or substantially modified without a state ballot measure, a far more important tenant issue for D15 candidates is Ellis Act reform. I would urge voters to ask candidates where they stand on the reform measure that Mark Leno sponsored in 2014 and 2015 and  only narrowly lost.

Ellis Act reform imposes a holding period to prevent speculators from buying a building and “going out of the rental housing business” the next day. With rising Ellis evictions in Los Angeles and ongoing evictions of vulnerable tenants in San Francisco, this bill needs to return to the legislature next year.

On nearly all issues the top D15 candidates will vote the same. That’s why name identification, demographics and endorsements will prove such a big role in the outcome.

Here’s how I see the race at this early stage.

Buffy Wicks’ raising $520,000 as a non-incumbent confirms she is among the favorites. This money will be seen in campaign mailers with high profile endorsers associated with Obama and Clinton, a very potent message in the highly partisan Democratic D15 electorate. There are a lot of D15 voters who do not pay much attention to local politics; they will be swayed by Wicks’ national supporters.

Wicks’ lack of electoral experience might cost her votes. But Maria Elena Durazo , who has been one of the nation’s most effective activists for 35 years and never held elective office, is a heavy favorite to win Kevin de Leon’s State Senate seat in Los Angeles. So Wicks’ lack of prior office holding may not be a big deal.

It’s hard for me to see Wicks not being among the top three in June.

Dan Kalb is among the favorites for two reasons. First, he has won support from diverse constituencies in becoming widely seen an extremely effective Oakland councilmember. Second, the Assembly district includes his entire Council district, which includes extremely high voter-turnout Rockridge (where Wicks lives). Kalb will do so well in Rockridge that he is assured of finishing in the top three. Kalb’s biggest challenge is that June 2018 is a very bad election cycle to be running in the East Bay or San Francisco as a straight white male.

Rochelle Pardue-Okimoto is among the favorites because she is backed by the California Nurses Association, among the most influential endorsers in the district (the influential Sierra Club has not completed its endorsement process, and will likely go with Kalb or Katz or both, as each has worked for the organization). Pardue-Okimoto is also helped by being a woman in a district that prefers electing women, and an African-American in a district that has a lot of voters favoring candidates of color.

Judy Appel and Jovanka Beckles would be extremely strong candidates in most Assembly fields. Their challenge is that neither has district wide name recognition nor the money to establish it.

In a city campaign, money can be countered by an extensive volunteer field effort. But that’s hard to do in the vast sprawling Assembly District 15.I can see candidates doing some door to door field work, but volunteers have been primarily used for phoning and visibility. Mail has dominated past D15 campaigns.

Ben Bartlett is full of creative housing ideas but he just was elected to the Berkeley City Council in 2016. It’s too early for him to run a multi-city Assembly campaign. I don’t see where he gets the resources to get his name sufficiently out for the June primary.

Andy Katz is a gay white male whose primary impact on this race could be to deprive fellow straight white male Dan Kalb of the Sierra Club endorsement. Unlike Kalb, Katz does not have a defined constituency that can propel him to victory.

At a time when progressives are encouraged to run for public office, Assembly District 15 in the East Bay has a wealth of solidly progressive candidates. It is a shame that only one can ultimately win.