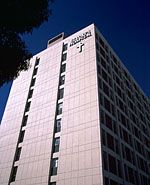 Beneath signs reading “Sutter: Do not take healthcare away from our community!” hospital workers and concerned citizens chanted on the corner of Valencia St. and Cesar Chavez. Traffic and protestors’ bull horns rang off the walls of century old St. Luke’s Hospital. The hospital was picked up by Sutter Health in 2001 but a controversy about Sutter’s commitment to providing health services has attracted furious opposition.

The Mission district’s St. Luke’s Hospital will be cutting the psychiatric ward this October 1st and later the NICU (neonatal intensive care unit – or infant intensive care). Rob Seide, Marketing & Communications Manager for St. Luke’s said that the ward inpatient load had slowed to four or five patients a day for a 31 bed unit. In addition to a slowing trickle of inpatients he said that psychiatric treatment has shifted directions to community based options like the Progress Foundation (the foundation provides treatment in community settings instead of a hospital).

“They artificially lowered their numbers and they’re turning people away,” countered SEIU United Healthcare Workers West’s, Thea Lavin. “There are two places that offer this care, SF General and St. Luke’s. SF General has a 30 bed unit placed on Code Red due to overcrowding.” Earlier in the day Kaiser Permanente and SEIU workers signed a five year contract outlining annual pay raises and more money for benefits and training.

“SEIU has an agenda to win a master contract with all Sutter affiliates,” said Seide. “They are looking to increase publicity and membership. They won’t sit at the table and bargain with St. Luke’s. SEIU workers have been without a contract since July 1st last year. The offer we gave them was never put to the vote of their membership. This protest isn’t about their employees but about increasing their membership.”

City Supervisor Tom Ammiano spoke while security guards and police observed from St. Luke’s parking lot. “When Sutter Health purchased St. Luke’s in 2001, it promised the California Attorney General that it would maintain services critical to the community’s wellbeing. The closure of the psychiatric unit stands in direct contradiction to Sutter/St. Luke’s promise to the Attorney General and will unnecessarily burden the already overwhelmed San Francisco General’s mental health unit.

An RN in blue scrubs, Eric Barreras, said, “I became a nurse for the patient – not for the money.” Supervisor Ammiano continued the sentiment. “Sutter Health has nothing to do with health; they have to do with money. Eventually St. Luke’s may close, we cannot lose it. I’m willing to go to the mat on this one and I know the other supervisors are too.”