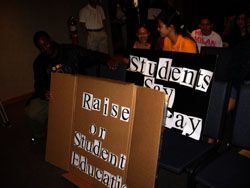 School officials in San Francisco and Berkeley have recently taken actions that should trouble those concerned about the future of progressive politics. In San Francisco, the Superintendent suspended a meeting of the Student Advisory Council because she feared it would pass a resolution critical of her. In Berkeley, the School Board denied a proposed name change of a local school after a two- year process in which students played a central role and complied with all legal requirements. Both cases demonstrate how those in power are undermining student activism at a time when it is essential.

Whether a Berkeley elementary school is named “Jefferson” or “Sequoia” should normally be of little concern. But when a school community with a sizable number of African-American students decides to embark on a name changing process, follows all the rules, and then is rebuffed by the School Board because its members do not like the result, then all of us who care about the future of progressive politics should be very, very concerned.

The debate about changing the name of Jefferson school was initiated by students who questioned why an institution attended by a large number of African-Americans should be named after a slave owner, particularly one who, unlike George Washington, did not free his slaves after his death. This led teachers at the school to get involved, as they seized on a remarkable opportunity to provide both a lesson in both history and civics.

Initially questions were raised about the ability of students as young as seven to decide on the school name, but the Berkeley Superintendent ruled that the procedures for name changing required that they be allowed to vote. The teachers and students made sure to follow all of the procedures exactly as written, and the process culminated in a school vote to rename the school “Sequoia.”

To this point the process had probably done more to educate the students about how social change occurs than anything they would be taught in their curriculum. But opposition soon emerged from those opposed to the name change, and the entire debate shifted from the legitimacy of the process to Thomas Jefferson’s role in American history.

After playing by the district’s own rules, the students of the Jefferson community learned that the rules of a game can quickly change when those in power do not like the result. When the School Board voted last week, it rejected the name change—and two years of work by proponents—by a 3-2 vote.

The students and their allies responded to the vote by immediately singing “We Shall Overcome.” But it was clear that the Board majority really did not want the primarily students of color to overcome; in a district where 50% of American-Americans entering high school do not graduate, the Board took strong action to further alienate this at-risk from the Berkeley school system.
When young, largely low-income students work hard and follow the rules, they deserve positive reinforcement. Instead, the Berkeley School Board reaffirmed a more dispiriting message, one that African-Americans have learned from their arrival in America through the tossing out of their votes in the 2000 Florida election: the standard rules governing civic society do not apply.

A city that should have been ecstatic to see young people of color organizing for social change instead told the kids not to bother with politics. And after cynically delaying the vote until school was out for the summer, the Board prevented the students from immediately organizing a public response.

This shameful suppression of youth activism in Berkeley followed a similar move by San Francisco School Superintendent Arlene Ackerman to prevent the District’s Student Advisory Council from voting on a resolution that urged her to renegotiate her contract. After the meeting was set for June 13, Ackerman sent an e-mail to Council members canceling it.

Anyone who has had kids in high school knows how incredibly difficult it is for them to add activities to their already long list of friends, sports, drama, music, and, last and often least, school work. San Francisco is fortunate to have thoughtful and caring kids willing to serve on an Advisory Council, and yet the Superintendent is trying to suppress it.

When the Council met despite Ackerman’s demand for a continuance, the Superintendent’s staff distributed flyers accusing adults of “using the SAC as a political tool” to embarrass Ackerman.

This tactic is reminiscent of the attacks on college students in the 1960’s—only then the adults charged with manipulation were identified either as “Communists” or the more encompassing “outside agitators.”

So we have an administration that believes students are not smart enough to figure out on their own that there is something odd about the Superintendent getting a salary increase when schools are being closed and staff laid off. I would wonder more about the students skill level if they failed to make this connection, or had completely ignored the issue.

Back in the 1990’s San Francisco has a Superintendent named Rojas who ruled the district with an iron fist. Rojas was so insecure about holding power that when the principal of Mission High won kudos for her ability to motivate the school’s low-income students, the Superintendent had her transferred.

Why transfer a popular and successful principal? Because it sent a message that nobody was safe from Rojas’ reach and that deferring to the Superintendent’s wishes was a wise strategy for others in the district to follow.

Ackerman arrived as a breath of fresh air, but has increasingly come to adopt Rojas’s imperial attitude toward the district.
Remember the Crosby, Stills and Nash song that urges parents to “Teach Your Children Well”? When it comes to encouraging youth activism in Bay Area schools, it is the adults who need a refresher course.