“Split-Appointments” are Good Policy, But Progressives Must Be Strategic 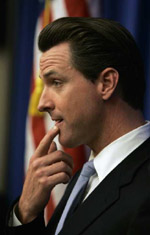 In response to Mayor Newsom’s sudden firing of PUC Chief Susan Leal, Supervisor Sophie Maxwell proposed a Charter Amendment this week to split PUC Commission appointments between the Mayor and the Board of Supervisors. “Split-appointments” on commissions has long been popular with progressives on the Board of Supervisors, as a means of wresting control from the Mayor. During the Willie Brown era, voters approved such changes for the Planning, Appeals, and Police Commissions. But since Gavin Newsom’s election in 2003, it’s been a tougher sell to pass such amendments – in part because voters don’t see the Mayor as a power-hungry tyrant who must be roped in. But with Newsom’s request for mass resignations, will voters finally demand some accountability?

After the Mayor’s commissioners on the MTA Board raised Muni fares and cut service twice in two years, transportation advocates – with the help of Supervisor Tom Ammiano – pursued a Charter Amendment in the 2005 election with a proven track record of success. Like the new PUC proposal, Proposition D called for split appointments on the MTA Board between the Mayor and the Board of Supervisors. But unlike prior victories, the measure went down to defeat because Newsom deployed all his resources against it. I knew it was in trouble on the eve of the Election when a gay friend of mine said, “I’d support it if Willie Brown were still Mayor, but I’m going to vote against it because of Newsom.”

Progressives took over the Board of Supervisors in December 2000 – because voters were angry at the gentrification and displacement caused by the dot-com boom, and Mayor Willie Brown conveyed a regal presence that offended democratic sensibilities. Who can forget his infamous quip about the Board of Supervisors as “my mistresses in need of servicing?” After a very new district-elected Board took over, they pushed for various Charter Amendments that devolved the Mayor’s power – by taking away basic planning decisions away from him on the Planning and Appeals Board, and demanding more accountability with a new Police Commission.

Voters didn’t necessarily need any direct examples of a corrupt Planning, Appeals or Police Commissioner to support taking power away from the Mayor. The very fact that all members of a Commission were appointed by Willie Brown was good enough for them, and the Charter Amendment would democratize the process by allowing some Supervisor appointments. And there’s no question that these commissions that were changed have become more responsive.

But for most voters, Newsom does not carry the negative baggage that Brown had – even though he shares many of his predecessor’s politics. A Newsom appointee on a commission does not carry the same connotations of “cronyism” that a Brown appointee had. There’s no question that Newsom’s co-opting of progressive consensus issues like same-sex marriage, workers’ rights and universal health care has endeared him in the eyes of many voters. So they did not blame him for the fact that his MTA appointees raised bus fares and cut service twice in two years.

What’s unique about the PUC case, however, is that the “corruption” is not coming from a bad PUC Commissioner who Newsom appointed – but from Newsom himself. As far as anyone can tell, Susan Leal did a good job at the PUC – and the Mayor provided no good reason for letting her go. “Some people that appear to be doing an extraordinary job,” said Newsom earlier this year, “will not fit for a second term … for whatever personality (reasons), they are not necessarily clicking with the rest of the team.” It doesn’t get more blatant as an admission of cronyism.

Does it matter that “split-appointments” at the PUC would not avoid another incident like what happened to Susan Leal, who is not a Commissioner but a Department Head? Even Maxwell admitted that it probably wouldn’t make a difference. But I doubt voters will care. The problem they’ll see is that Newsom has removed someone for no other reason that she was “not clicking with the team,” and that it smacks of the same type of corruption from the Brown era. That doesn’t look good – and neither does the Mayor’s general call for all his Commissioners to resign.

“Split-appointments” on more City Commissions – or even elected commissioners – is good public policy, but progressives no longer have the luxury of a Mayor like Willie Brown to put any Charter Amendment on the ballot that removes appointment power from the Mayor and expect it to pass. There needs to be a special reason that drives to the heart of the matter, and resonates with the voters in a more compelling way.

Supervisor Jake McGoldrick has another Charter Amendment that could prove potent, if a strong campaign is run to drive the message home. Now that voters have passed Prop A that transfers $26 million a year from the Board of Supervisors to the MTA Board, McGoldrick has proposed to have an elected MTA Board. If an unelected body has this much power, why not create some direct accountability by having the voters directly choose them?

That’s an easy issue that many voters can understand – provided that progressives don’t fall into the same trap again, coming off as merely “anti-Newsom.”