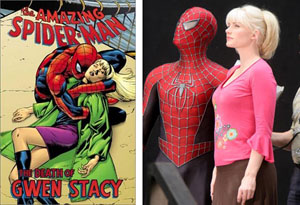 I’ll confess, I’m a longtime Spider-Man fan, and in fact, I can still vividly recall my sixth grade teacher Mrs. Patterson; (a former WWII WAC), catching me reading Spidey’s latest battle with Doctor Octopus during class; summoning me to her desk, and ceremoniously ripping it into four neat pieces before returning it and me to my seat of shame. Last weekend’s blockbuster numbers for Spider-Man 3, don’t necessarily translate into a great movie; critics have both savaged and praised the web-slinger’s latest entry, so without much trepidation, I ventured out to see if Spidey delivered… He did. So with that being said, I am no stranger to the mythology of Spider-Man, and found this latest version of our hero’s exploits filled with the same sort of Hollywood rewrites of well known story-lines that have plagued virtually all of the super hero films; Alicia Silverstone’s Batgirl portrayed as Alfred the Butler’s relative instead of Commissioner Gordon’s daughter comes readily to mind. Nevertheless, Spider-Man 3’s inexactitudes are overcome by fantastic special effects, and a story of love, redemption and sacrifice; all of the elements that made Spider-Man the comic book into one of the best loved and most popular of the genre.

For those new to the Spider-Man lore, the hero is one Peter Parker, portrayed in the films by Tobey Maguire. Parker is a brilliant but nerdy student, and during a lab/field trip, is bitten by a radio-active spider, and gains the proportional strength and agility of one. When presented with the opportunity to stop a robber, Parker’s unwitting apathy leads to the robber escaping, and later murdering his beloved Uncle Ben. To atone for his sins, Parker dons his costume and vows to fight crime forever.

A host of characters from the comic books appear in the films, though not chronologically; his wise and elderly Aunt May, played by Rosemary Harris; James Franco as his wealthy best friend, Harry Osborn; J.K. Simmonos as his boss, Daily Bugle publisher J. Jonah Jameson; a host of villians; Alfred Molina as Doctor Octopus, William Dafoe as The Green Goblin/Norman Osborn, and in this latest film, Thomas Haden Church as The Sandman; and Venom, played by Topher Grace. Faithful readers will also recognize Parker’s one-armed college professor, Dr. Curt Connors played by Dylan Baker; who will ultimately become The Lizard in an attempt to regenerate that missing limb.

In the early Spider-Man comics and cartoon series, his love interest was Betty Brant, played by Elizabeth Banks, and only later did he fall for Mary Jane Watson, the oft abused girl-next-door and aspiring actress, played by Kirsten Dunst. In another bizarre Hollywood scripting move, Spider-Man 3 finally introduces us to the character of Gwen Stacy, Spider-Man’s most controversial girlfriend from the comics portrayed by Bryce Dallas Howard.

What makes this so odd, is that this character was at the center of one of the most controversial comic book story lines ever written. In the June 1973 issue of Spider-Man (#121), Gwen Stacy was held captive on a tower of the Brooklyn Bridge by the Green Goblin. Spider-Man arrives to fight him, and when the Goblin throws Gwen off the bridge, Spider-Man catches her by a leg with a strand of his web. Unfortunately, the sudden deceleration snaps her neck. He initially thinks he has saved her, but when he pulls her back onto the bridge, he realizes she is in fact, dead.

In shock and anger, Spider-Man nearly kills the Green Goblin in retaliation, but in the end chooses not to. After an ensuing battle, The Goblin is killed when he is impaled by his own Goblin Glider in an attempt to kill Spider-Man.

The death of Gwen Stacy had an enormous impact in the world of comic-book fandom. Before her, except possibly as part of an origin story, superheroes simply did not fail so catastrophically; nor did a loved one of a superhero die so suddenly, without warning, or so violently. Because of this, some fans and historians consider the death of Gwen Stacy as the end of the era known as the Silver Age of Comics.

If this all sounds vaguely familiar, you wouldn’t be far wrong because it is. This was part of the plot of the first Spider-Man film, except it is Mary Jane Watson who is thrown off the bridge by the Goblin, not Gwen Stacy, and in the film version, Mary Jane lives.

In the comic book world, Gwen Stacy’s death had enormous repercussions. Mary Jane Watson at that time, was a close friend of Gwen Stacy’s, and was deeply affected by her death, and her personality became much more serious. Gwen’s death also drew Peter Parker and Mary Jane into a much closer friendship, and eventually a romantic relationship. It should also be noted that The Green Goblin’s status in Spider-Man’s “rogues gallery” was elevated by his murder of Gwen Stacy. Before the death of Gwen Stacy, Doctor Octopus had been Spider-Man’s archnemesis, but Gwen’s death pushed the Green Goblin into that role forever.

Gwen’s death spawned a host of comic book character demises, spin-offs, what ifs, and resurrections. So popular was her character and so central to the Spider-Man mythos, that even the writers of this latest film must have felt the need to bring her back to life. The 1970’s had ushered in a new era in comic book writing; drugs, death, and the Vietnam war, were previously taboo topics, and Spider-Man was the first of the superheroes to tackle those topical maladies, and for a few issues, it even lost it’s “stamp of approval” from the now defunct Comics Code Authority, the former gatekeepers of what was deemed wholesome reading following the uproar over EC Comics’ Sci-Fi and Horror titles of the 1950’s and 1960’s.

In Spider-Man 3, Gwen Stacy lives again, as does her adoring father, NYPD Captain Stacy, (played by James Cromwell in the film). Captain Stacy was also killed in a previous story-line, and while he lived, was one of Spider-Man’s truest allies. A double whammy for your friendly neighborhood Spider-Man. Still, I suppose Hollywood’s writers must have their reasons for jumbling the chronology of these original stories, and I have no doubt they’ll continue their trend.

The upcoming sequel to the Fantastic Four film. “Rise of the Silver Surfer” will be another extreme test of patience for the Marvel Comics faithful. The Silver Surfer is another of Marvel’s most complex and compelling characters, and although his origin is indeed tied to the Fantastic Four, I just can’t see how they will do it. The first Fantastic Four film may have been a marketing success, and a far cry from Roger Corman’s earlier low-budget effort; (an effort Marvel sued to halt it’s distribution), but I was troubled by the casting, and it’s deviations from the original story.

Jessica Alba was deemed perhaps the worst offender, and despite the additions of the stellar actors Ioan Gruffudd, Julian McMahon, (Doctor Doom) and Michael Chiklis of “The Shield”, the film seemed to lack the kind of connection to the audience that all of the Spider-Man films have. Many would at least have preferred a digital version of the “Thing”, not unlike the treatment given to Eric Bana’s “Incredible Hulk”. Chiklis was far more menacing as Detective Vic Mackey, than his portrayal of the ever lovin’ blue-eyed Thing.

Future writers and producers of these super hero films should take a look at what makes these films work; it’s not long lines ala Toys-R-Us at Christmas time, or the latest collect-them-all happy meal; It’s about what makes us human, it’s how we learn from our mistakes, forgiveness, redemption, and saving the world.

As for my copy of Spider-Man 3, Mrs. Patterson is not getting her hands on this one.

E. “Doc” Smith is a musician, recording engineer and the creator of 1980’s comic book, “Tony Squak, Intergalactic Sleuth”. He is also the inventor of the musical instrument, the Drummstick. He can be reached at http://myspace.com/edoctorsmith